Manali: The Jamlu Devta of Malana, a heritage village of Kullu valley in Himachal Pradesh, has ordered the villagers to close all the guesthouses running in the village as they were causing damage to the sanctity of the place. In compliance of the divine order, most villagers have shut down their units while a few are said to be resisting deity’s decree.

The villagers on Monday held a meeting to find a solution to the deity’s sudden order as many villagers complained that they had made a lot of investment to build the commercial properties. Deities, thorough oracles, have been warning villagers for over 10 years that guest houses and outsiders were harming the sanctity of village and villagers were falling prey to a corrupt culture that the visitors were brining to their society.

Even Shringa Rishi, another village deity, had expressed anguish about the values of Kullu valley culture eroding fast. The deities have been repeatedly warning villagers to preserve their ancient culture, failing to which may have dire consequences.

Jamlu is the prime deity of Malana village and villagers honour all the decisions communicated by the deity oracle. The village has nearly 10 guest houses and most of them are being run by outsiders on lease basis.

“All guest houses have shut down. A few owners were opposing the decision. Now all villagers have come together to honors the order of deity. Villagers have now decided that those who will not honor the order will be boycotted by entire village,” said Paras Ram, a resident of Malana village.

Most villagers are in support of the decision and are even pointing finger at some guest houses saying that they are involved in illegal and anti-social activities. The village, which remained out of reach of outsiders for centuries, is now frequented by both domestic and foreigner tourists. 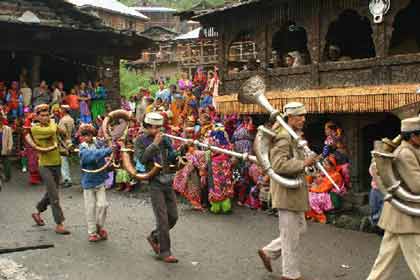 In Malana village there are some sacred spots that are not allowed to be touched by anybody. The villages governing body has recently increased the fine if anybody violates the deity’s law to touch these holy places.

The villagers who used to wear the clothes made in handlooms until two decades back, now the younger generation only  wears jeans and t-shirts. The streets in the village stink with garbage, mostly thrown by tourists and guest houses.

Malana panchayat pradhan (president) Bhagi Ram said, “We will soon come to a decision about what should be done with these commercial units. Panchayat up-pradhan Hari Singh said a few guest houses close to village are still operational but those inside village are closed. “This is the issue related to our religion, customs and deity. Everybody has to follow certain rules of the village,” he said.

Until few years back when Malana had no political party, no election system, no government, no police and no administration rules. All rules and decisions were made by a group of villagers sitting in upper and lower house of the village with the active guidance of Jamlu Devta.

Malana is infamous for production of high quality charas as Malana Cream, the dope harvested in this valley was reported to have been declared the best one in the world by regular users.