Dharamshala: Tapish Thapa has been appointed a Match Commission by AIFF (All India Football Federation) for I League or Indian Super League football championships, to be played in India. Tapish, a resident of the town here is the first Himachali to achieve this honour.

Media coordinator Mr Satya Dev Sharma said,”Tapish cleared different test of AIFF to get this post. Earlier he was doing the duty as referee of AIFF.” 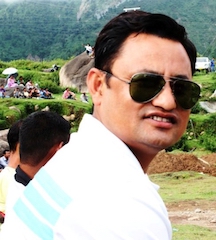 Talking to Hill Post Tapish Thapa said, “I will convince AIFF to organise I League and Indian Super League football matches in Himachal too.”  The new post has increased my responsibilities for the game manifold now.

Tapish  started playing football at the school level and had cleared all India referee exam in 2012.

“All the 24 match commissioners of India who cleared the exam recently shall attend AIFF seminars at Mumbai and Kolkotta in August before joining their duties,” said Thapa