Shimla: ‘Papa’ an award winning film about a sensitive relationship of a son taking care of his paralysed mother has made the cut as a finalist for the Satyajit Ray Short Film Competition being held at the London Film Festival.

Papa would be competing with 7 other films for the award. Being one of the three films from India to have made it to the finalists, the others are from UK, USA and Switzerland. The London Film Festival ends on 29th June. 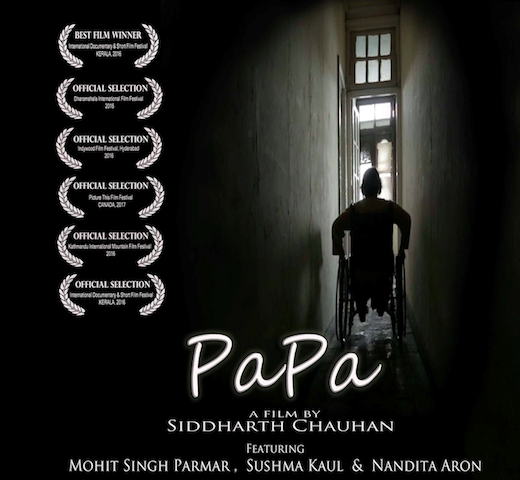 Produced and directed by Shimla boy Siddharth Chauhan, the lead actors in the short film are Mohit Singh Parmar from Palampur, Sushma Kaul from Shimla and Nandita Aron from Bereily.

The sensitive story of the film is woven around Sushma, the paralysed mother, and her young son, Rajiv, who are living a strange life after an accident has scarred their lives forever.

Shot in a span of 6 days in Shimla in October 2015, on a shoestring budget, Papa premiered at the Kerala International Documentary and Short Film Festival, where competing against 40 other films, many made by professionals and film institutes, it went onto be judged s the ‘Best Film for its, ‘innovation in narrative gesture….wicked understanding of human behaviour.’

Siddharth is an independent filmmaker with no professional training. Other films that he produced and directed are “Boys Don’t Wear Nailpolish’ (2013) and Infinite Space (2014). All his films, produced under the Secret Corridor Pictures banner, are based in Shimla that make use of local culture, talent and scenic settings.