The Govt’s inflexible, mute and muscular policy on the internal disturbances in Kashmir is getting nowhere fast, forcing a plaintive Chief Minister to wail: “Kashmir hamare paas hai, zamin hamare paas hai”, stopping just short of asking the obvious question: “lekin kya Kashmir ke log hamare paas hain?” The Center appears to be playing the role of a real estate developer in the Valley, grabbing the land and to hell with its occupants. Things have only got worse during its three year rule and Kashmir is, surely and not so slowly, being pushed into the lap of radicals and Islamists. The demand is gradually shifting from a tenuous, ill-defined “azadi” to a Nizam-e-Mustafa and adopting of sharia law: a reaffirmation of an identity that is not being acknowledged. The number of local militants has more than doubled to almost 150; India Today reports that about 3000 new Wahhabi mosques have sprung up, spreading incendiary jihadist ideology. Two mainstream politicians have been killed in the last month and banks are looted on a regular basis. 16 policemen have been killed this year alone, the highest number so far. More than 60 WhatsApp groups with a membership of perhaps 5000 dangerously motivated youth have begun to actively coordinate anti-govt. protests. Even school girls have turned stone pelters. This precipitous slide will not even be acknowledged by Delhi’s rulers who seem to have carved their indifference in stone.

While the politicians continue to win elections on the back of this ersatz nationalism, it is the security forces, particularly the Army, which is paying the price – in blood and reputation. According to the South Asia Terrorism Portal, the number of soldiers killed in 2014 was 32; it shot up to 68 in 2016 and had reached 17 till March this year. Since March 2015, when Mehbooba assumed office, 457 people have been killed, including 134 security force personnel. Almost 40 soldiers have died since the surgical strikes. But the BJP has won 4 states and 3 Municipal Corporations since then, so obviously the policy-or lack of it-is working for someone ! Hence the current policy: If it ain’t broke, don’t fix it !

Casualties apart, however, there is the growing concern that the Indian Army, one of the finest fighting forces in the world, is taking a beating to its reputation, ethos and values. The reason is that it is now being used as a police force in Kashmir, a role which any armed, highly trained, professional force is uncomfortable with. Armies are meant to counter external forces, not suppress their own citizens for extended lengths of time. The latent danger in this is that, over time, army personnel can acquire the same disregard for legal processes and human rights for which our police is infamous. This is the reason why the Army is kept insulated from the civil administration on a day-to-day basis and not involved in the maintenance of law and order, except in emergencies. But by deploying our jawans as a third line of police (after the state police and the CRPF) for years on end, the govt. was just asking for an incident like the “human shield” to happen. 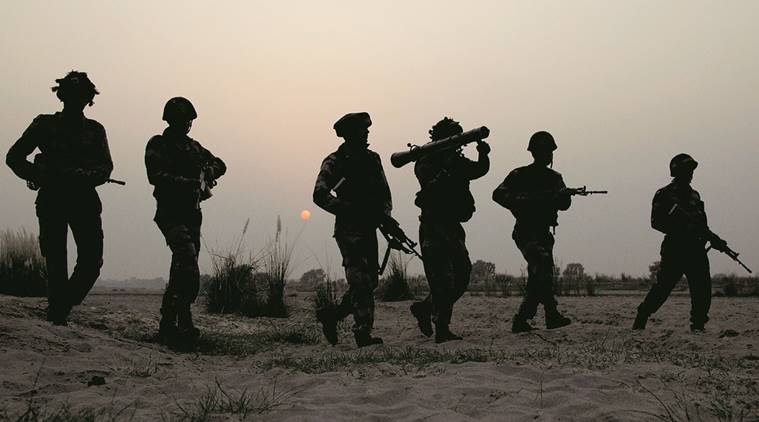 When Farooq Ahmed Dar was strapped to a jeep and paraded through seven villages by Major Gogoi, alarm bells should have gone off everywhere. This was abduction and kidnapping, pure and simple, for Dar was no criminal, there were no charges against him, he was not even a stone pelter but a citizen who was returning after casting his vote. Law abiding forces don’t take hostages, terrorists do. One cannot uphold the law by breaking it, for that is the road to a Duterte like tyranny. But even worse was the reaction to the incident. The Army we know would have admitted that this was an aberration and would have apologised to the Kashmiri people, Major Gogoi would have been spoken to, and that would have been the end of a regrettable chapter. Instead, the govt. lauded the Major as a hero, the COAS justified his unlawful behaviour, he was allowed to appear on TV programmes, and the Army even awarded him a commendation. Retired Generals of various vintages, moustaches quivering on prime time TV, conferred on him the status of a war hero. Moderate voices like those of General Panag and Hooda were drowned out in this nationalistic hysteria.

The COAS, General Bipin Rawat, has been making ill advised statements more suited to a politician. By accusing the Kashmiris of waging a “dirty war” he has toed the govt. line but brought into question his understanding of his role: one doesn’t wage “war” against one’s own citizens, nor does one treat them as enemies, as the General does. By terming students and stone pelters as “overground supporters of terrorists” he has again revealed a shocking mind set that largely explains the political controversies that the Army has now got embroiled in, perhaps for the first time in its history. Any professional army simply does the job – sometimes difficult, sometimes distasteful – assigned to it by the government of the day, but it should refrain from aligning itself with any political judgements. And it should certainly not term its own citizens as terrorists without distinguishing between terrorists and protesters.

By cosying up to the govt. and stepping into the realm of politics the Army is walking into the trap set for it . Mrs. Gandhi infamously wanted a “committed” bureaucracy: the BJP is more ambitious – it wants a committed Armed Forces. Towards this end it seeks to make the Army another emblem of its own version of “nationalism”, along with the cow and yoga. And by the rules it has itself set out, any questioning of these symbols is anti-national. This is why we have all this sound and fury every evening on TV when any adverse question of, or comment on, the Army is vilified as unpatriotic. For the BJP has its own version of “patriotism” too, as pointed out by Appu Esthose Suresh in a recent article: a concocted, toxic blend of nationalism and Hindutva.

Clearly, the ruling party is using the Army as its own human shield to buttress itself from any criticism of its Sphinx like silence and continued use of force against the citizens of the Valley. It has deliberately created a narrative, with the help of war mongering TV channels, that any criticism of the Army is an insult to it. It is not. Firstly, the criticism is usually of the govt., not the army – by deflecting it on the latter a deliberate untruth is being created, Trump style. Secondly, in a healthy democracy no institution is above questioning or criticism: the right response to this is transparency, not exaggerated jingoism. Equally regrettably, the Opposition is using the Army as its current whipping boy in order to attack the govt. By allowing itself, under prodding by the politicians and a rabid media, to take sides, the army is unnecessarily getting caught in a cross-fire not of its making. Its hitherto spotless image is being tarnished.

The Armed Forces should be alert to this danger, and not allow themselves to be coopted into any political party’s design or narrative. They should strongly resist being “appropriated” by any political outfit for electoral gains, continue to do whatever difficult job is entrusted to them by the govt. of the day without unnecessary comments, and keep politics at arm’s length. If they do not, they shall identify themselves too closely with a particular political party and make themselves vulnerable to political attacks. The Opposition has already started questioning the Army’s loyalties, neutrality and respect for law; the COAS has even been called, most regrettably, a “street goonda.” These are ominous portends, and it is for our Generals (including the very vocal retired ones) to ensure that the Armed Forces are not dragged into the partisan political discourse that is the bane of our times. They should realise that the politicians are only making use of them, reaping the rewards while the soldiers pay the price. What kind of a deal is that ?