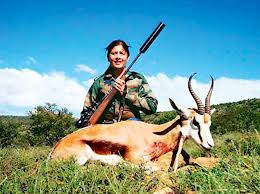 Khan, a minister of state for school education and women and child development, came under intense criticism after her photographs with hunted wild animals were flashed across the internet earlier this month.

In a strongly worded letter to Khan, a Nationalist Congress Party (NCP) minister, an FIAPO spokesperson said that she had sent a wrong message to the youth of India.

“We have demanded that the minister tender a public apology. She has sent a very wrong message to the youth of India who are directly influenced by her office as minister of education,” the spokesperson said.

In her defence, Khan said she did not kill any of the animals – a springbok, zebra, kudu, blue wildebeest and impala – and that she was just posing with the dead animals in the pictures.

She also said that hunting these animals was not illegal in South Africa, a country she had visited six months ago.

“We have recommended that she re-evaluate her response and focus on developing humane education modules with the assistance of animal protection organisations for state schools, to spread the message of compassion and care for all living creatures as stated in our constitution,” the FIAPO spokesperson said.