This is in response to an opinion article by Mr Aakar Patel published in Times of India on 14 May 2017 titled ‘“Yes India is a Democracy but it’s not really a Republic”.

Mr Aakar Patel comes across as a hypocrite and an extremely arrogant individual through his writings. How else can one explain the term “AAKARVANI” printed so boldly in the Time of India just before the start of his article as if it is some divine message? No humble person working sincerely in social sector would ever lay such claims on what he says or writes. His humility and selfless character will prevent him from such personal hallowed glorifications.

Coming to his article “Yes India is a Democracy but it’s not really a Republic” published in times of India dated 14 May 2017. He deserves to be congratulated on his English language skills and the ability to define republic and democracy in a few simple words. But then articulation in English language alone is hardly a means to govern or run a nation. Running a nation, as diverse as India, with its nearly 1.3 billion people is a herculean task that can hardly be understood sitting in ones five star air-conditioned chambers or heading a social organisation. Most of these supposedly well meaning organisations focus only on establishment bashing to create controversies which in turn give them publicity – a route that is essential for their existence and cash flows. His organisation Amnesty International India “campaigns to protect the rights of all individuals irrespective of where they are born or their religion or gender since they believe that all human beings are born free and equal in dignity and rights .” They also advocate as per Articles 29 & 30 of their charter that everyone has duties to the community in which alone the free and full development of his personality is possible. Further article 30 states that ‘In the exercise of his rights and freedoms, everyone shall be subject only to such limitations as are determined by law solely for the purpose of securing due recognition and respect for the rights and freedoms of others and of meeting the just requirements of morality, public order and the general welfare in a democratic society’. Nothing wrong with this charter and it needs to be lauded. But the question is do they really follow this in the right spirit to strengthen the hands of the establishment or use it only to run down the establishment? Unfortunately the latter tends to be truer for Amnesty International India. 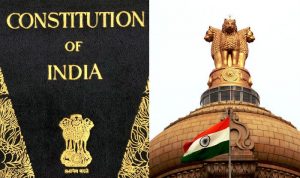 Mr Patel makes a case that while India is a democracy; it is certainly not a republic. This conclusion is based on the surmise that Indian leaders are elected by the people as per needs of democracy but since power does not rest with the people therefore it is not a republic. To substantiate his claims and to make his point regarding India not being a republic he has isolated the two totally when in all fairness they can never be separated. But here the intent is malicious and hence the separation. Please peruse all the dictionaries that you can lay your hands on and you will find that nowhere do the words republic and democracy have limited meanings of ‘power resting with the citizens’ and ‘a state in which leaders are chosen from among general population, and not the aristocracy’ respectively . The meaning of republic as given in most dictionaries and other valid documents is ‘a state in which supreme power is held by the people and is exercised through their elected representatives, and which has an elected or nominated president rather than a monarch.’ Democracy on the other hand is defined as ‘A system of government by the whole population or all the eligible members of a state, typically through elected representatives under a free electoral system”. So in nutshell one can safely say that Democracy is the route a Republic state follows to ensure power to its people that allows them to elect their leaders from among themselves who in turn form the government and exercise power on behalf of those who elect them. So it is impossible for a state to be a republic without being a democracy and vice versa. Therefore Mr Patel is wrong when he sees the two in isolation.

Mr Patel has cited one example of state brutality where protestors were shot at by the police while resisting the takeover of their land for building a power station. He also condemns the special rights given to the armed forces, Army in particular, in its fight against insurgency and terrorism. He has a similar approach and belief towards Naxalites or others of the same ilk. In short Mr Patel believes that irrespective of what a terrorist, an insurgent, a Naxal or any other protestor may do or believe in, the authorities must deal with them with kid gloves at all times. He goes on to say that if a killing takes place because of any action of the authorities it is nothing but state sponsored murder. So a Pakistan trained jihadist can cause mayhem in the Kashmir valley with impunity. Naxalites can harass, extort money and run a parallel administration in the area of their choosing and the authorities must remain mute spectators. Protestors, right or wrong, can disrupt local life or hinder development for a larger national cause as and when they want to with no fear of the authorities stopping them. This according to him is citizens’ power that they can exercise the way they want to. That in nutshell will make India a Republic as per AAKARVANI. He further argues that when state uses force over citizens it puts interests of the state above the interests of the people which amounts to curbing power of the people.

Mr Patel’s dislike for the Army (military) is known and he has once again said so in this article. He feels interests of the Army are placed above the interests of the citizens by media and others and in doing so India does not remain a republic. One fails to understand this logic on two counts. Firstly in India military perhaps has no rights, not even the basic fundamental rights that he and all others enjoy. Army is content to do its basic job of guarding the frontiers of the nation. If it is called by the government for other duties it is because everything else has failed and the government is in a ‘do or die’ situation. Secondly when Army steps in it has no agenda to further its own interests since it has no interests of its own. Its actions are aimed at safeguarding the interests of the state and those of the vast majority of citizens that may be at risk because of a few misguided, misinformed or brainwashed people from within or outside the state who are invariably working against the state. It would be naive to assume that Mr Patel does not understand all this. But then Mr Patel has to make a living and military bashing and establishment bashing can be very lucrative for dollars to flow.

Can India be a state where individual interests of 1.3 billion are allowed to flourish without any checks and balances? In a country as diverse as India, will such interests ever merge and become interests of the state? One will have to be very naive to answer these questions in the affirmative. All our rights and privileges as citizens of a democratic republic called India come with some duties, responsibilities and commitments towards the state. These can never be absolute and delinked from other fellow citizens. Our preamble also talks of equality of justice, liberty for all, equality for all and finally a fraternity that ensures unity of the state. A citizen can enjoy all these rights as long as he in doing so does not undermine the state or impinge on similar rights for other fellow citizens. Unfortunately when an organisation like Amnesty International encourages freedom of speech, it does so only in select quarters where invariably it is against the interests of the state as can be seen from their unconditional support for Naxalites and Kashmiri Jihadists despite their barbaric acts against common people and the agenda of breaking up the nation. The approach of such organisations does give rise to a feeling that they want to see a weak and troubled India so that development takes a back seat. Why they do so is obvious and not much of a brainer? Sometimes dollars do become more attractive than the well being of the nation.

Mr Patel, it is very easy to sermon on freedoms of all kinds without any checks and balances from the confines of one’s office. Please go to Kashmir valley and join ranks with the police or Army when instigated and paid mobs hurl stones at them or terrorists fire at them while shielding themselves behind women and children. It may do you a lot of good if you chose the front row for a better view and understanding of the whole modus oprandi. You will also see how the forces practice restraint in such grave situations and use only minimum force (never lethal force) when safety of the state or other civilians becomes paramount. If you go with an open mind, you will also understand that the interests of the army never reign supreme, if anything it is the soldier who is always at the receiving end. A soldier has no personal interest or axe to grind in such situations, all he is doing is his duty to preserve the unity and integrity of the state. Unfortunately one can hardly say the same when it comes to actions and views of intellectuals like you when they come out with their VAANIS.