Dharamshala: During our visit to Lhasa we promised each other then and there that we would do everything in our power to make sure that the Dalai Lama returns to his place, Nancy Pelosi, US democratic party leader stated here today

His Holiness the Dalai Lama today graced the public felicitation at the main tibetan temple Tsuglagkhang, organised by the Central Tibetan Administration in honor of the high-level bipartisan eight members US Congressional delegation visiting Dharamshala. The delegation, led by US House Democratic Leader Nancy Pelosi, arrived here yesterday, is on a two-day visit to Dharamshala to reaffirm the United State’s continued support on the Tibet issue.

Expressing his gratitude to the delegation for coming to Dharamshala, the Dalai Lama described the United States as the global leader for world peace. “America is a leading nation of the free world and plays a pivotal role in the promotion of peace around the world. U.S. Democratic House leader Nancy Pelosi has been one of the longest friend and supporter of the Tibetan people, who has stood with us in the most critical of times and situations. I thank all of you today for expressing your genuine support for the Tibetan cause and solidarity for Tibetans inside Tibet,” His Holiness said. 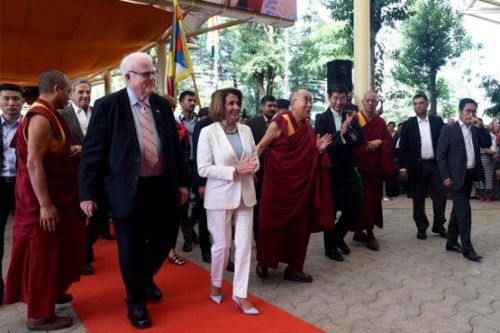 “It is important to remember that Tibet supporters are not merely supporting us because of attachment; they are supporting the spirit of truth and justice, which is the core strength of our struggle. The Tibetan struggle represents that of truth, justice, non-violence and Tibetan people’s determination to preserve this culture has generated intense support for Tibet from people of all corners of the world,” His Holiness explained.

His Holiness further emphasised his commitment to nonviolence and said that the challenge before us is to make the new century, a century of non-violence and dialogue.

“Today, it is a conviction in these values that gives me the powerful motivation to promote basic human values. Even in my own struggle for the rights and greater freedom of the Tibetan people, these values continue to guide my commitment in pursuing a non-violent path,” His Holiness added.

“My sincere hope is that the future of Tibet and China will move beyond mistrust to a relationship based on mutual respect, trust and recognition of common interests.”

“In our newly emerging global community, all forms of violence, including war, are totally inappropriate means of settling disputes. According to my personal experiences the best way to overcome conflicts is to bring about mutual understanding through dialogue and not violence,” His Holiness noted.

Nancy Pelosi, Leader of House of Representatives, addressing the gathering, on Wednessday in Dharamshala ,paid tribute to the Dalai Lama as a man of compassion, vision and hope. She said: “Anytime anywhere a person can be in the presence of His Holiness the Dalai Lama is a special occasion. I am proud to be here with the delegation from across America.”
I presence of the US Delegation she said,“We came to see you as you have inspired us with your hope. I am more hopeful than ever that we will meet the challenges that face us. My hope springs from His Holiness’ message of compassion. Hope exists right where His Holiness tells us, right between deep faith in the goodness of others, belief and compassion.”

“When we see the spark in the eyes of the children yesterday at the Tibetan Children’s Village, the children’s vision, we saw hope that they will one day return home to Tibet. When we saw the Tibetan Institute of Performing Arts last night and today, we saw the hope that they would bring the authenticity of the Tibetan art home to Tibet. When we heard the leadership of President Dr Sangay, we saw hope for the progress of freedom for Tibet,” she explained.

In an emotional recollection of the US Congressional visit to Tibet in November 2015, Leader Pelosi said, “We went to the Potala Palace and we saw the room where His Holiness lived. We promised each other then and there that we would do everything in our power to make sure he would return to that place.” Rep Jim McGovern, Betty McCollum and Joyce Beatty were also part of the Congressional delegation to Tibet.

She also spoke about a particular exchange the delegation had with Chinese government officials, in which Leader Pelosi called on the Chinese officials for confining the minds of the children, freedom, culture and religion in Tibet.

Leader Pelosi further said the free world would have lost its moral authority to speak about human rights anywhere in the world, if it did not speak up against the repression in Tibet and in rest of China.

“To some in China, the authentic autonomous Tibet is inconceivable; to us it is inevitable. We must shorten the distance between the inconceivable to them and inevitable to us. I am sure with your devotion, determination and commitment to Tibetan values, culture, language and religions and under leadership of His Holiness the Dalai Lama who will live to be at least 113 years old, I am certain we will succeed.”

“I met Leader Pelosi and Representative McGovern at DC three years ago. During the meeting, she gratefully promised me eight things. Seven of the promises were already implemented. This is a symbol of your dedication and support. Unlike other politicians, you not just talk the talk, but also walk the walk. One of the promises was a visit to Tibet. And in 2015, Leader Pelosi led a congressional delegation to Tibet and had a frank discussion with Chinese leaders,” Sangay exclaimed.

Sangay further described , “Today there is no justice for Tibet and Tibetans in the practice of their religion, language and in expression of devotion to His Holiness the Dalai Lama. Only when there is justice in all of these areas, will there be freedom in Tibet. And that is what we, in the United States Congress, is firmly committed to.”
Representative Pramila Jayapal also expressed her support for the Tibetan issue and recalled her childhood spent in India. She also thanked her birth country India for providing refuge to the Tibetan people. She emphasised the importance of preserving Tibetan religion, language and arts.