THE FAREWELL DINNER: modelled on the Last Supper, is given for senior officers who are about to kicked into the waste-bin

The IAS, unlike its progenitor the ICS, will bequeath few memories other than those of Chief Secretaries getting raided for disproportionate assets or being voted the most corrupt by their own colleagues. But as the service now heads for an inevitable merger with either the Vivekananda Foundation or the Observer Research Group, it is heartening to note that it will leave behind at least one innovative institution—the Official Dinner (or OD). There are two major practitioners of the OD: the Army and the IAS. The former has an advantage in the matter of finding funds (and reasons) for justifying ODs, because it can debit all expenses to Raising Days, Regimental Days and Shobha Deys, but the IAS has to be more inventive because it is under the ever watchful gaze of some whistleblower or CAG just waiting to ambush them with a book titled THE ACCIDENTAL INVITEE or NOT JUST A DINER-THE DIARY OF A NATION’S AUTONOMOUS GOURMET. It is for this reason that the IAS is given a higher pay scale than the Armed Forces: explaining the loss of a dozen tandoori chickens from the pantry of Hotel Holiday Home requires far more management skills than accounting for a dozen missing jawans on the LOC.

Recruits to the IAS are initiated into the arcane ritual of the OD in the Academy at Mussoorie. Its presiding capo di tuti capi (or Director) hosts mock ODs frequently where the basics are spliced into their DNA. I still remember two of them: one, “never open your mouth till the food is near it”, which perhaps explains why the IAS is so reluctant to open its collective mouth and speak out. The second rule stipulated that one should never speak ACROSS the table, but only to the persons on either side, even if the guy on the left happened to be a carbuncle from the IFS or the bloke on the right a blister from the IPS, and one was desperate to chat up the lady across the table with a view to marrying her because she had been allotted one’s home state (UP, in most cases) while said one was exiled for life to Nagaland. We were also taught the difference between a butter knife and a fish knife (the former for marinating one’s political bosses and the latter for gutting colleagues), between a soup spoon and a dessert spoon (the former for raking it in and the latter for being politically correct). The uses of the versatile “chamcha” is something we discovered for ourselves later, and adopted as the most valuable of all cutlery. The most draconian rule was that when the Director stopped eating and put down his knife and fork, everyone stopped eating too. Since the Director, as befitted a Godfather, was the first to be served and the 400th probationer served about 20 minutes later, by the time the former finished masticating about 200 of us had not even sniffed the soup. This accounts for the fact that the IAS is always first in line at the feeding trough: it’s a hard lesson learnt well. 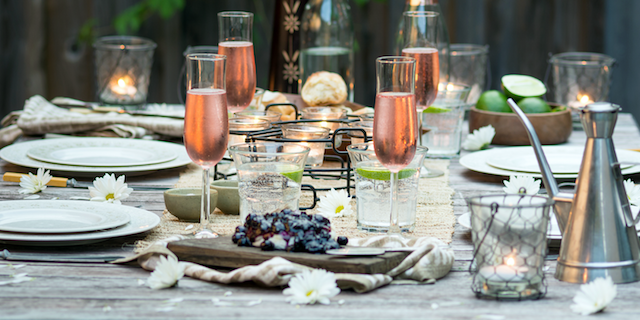 Since the IAS controls 600 districts, 100 Ministries and a few thousand programmes, finding a reason for throwing an OD is never a problem. There are a few, however, that deserve special mention:

THE PSU (PUBLIC SECTOR UNDERTAKING) DINNER: held after every Board meeting, it is meant to console the officers for the huge losses they have notched up. Intended to occupy the commanding heights of our economy, our PSUs were dislodged from there even quicker than the Pak soldiers from the heights of Kargil. Now in the valley of death their officers will not go, however, without a fight- sorry, bite- hence the dinners, slotted under “Any other item” in the agenda.

THE EAP (EXTERNALLY AIDED PROJECT) DINNER: EAPs are a kind of international CSR where other countries give us moneys as aid, and then take them back through consultancies, technology transfer and equipment. We are usually left with only enough money to host a dinner every quarter, on which we spend every remaining dime lest they take that back too.

THE CENTRAL TEAM DINNER: when Secretaries in Govt. of India can no longer stand their wives’ cooking they usually take off to a state to “review progress” on various schemes. The review consists of visits to temples, golf resorts, shopping on the Mall and a seven course dinner at night. The strong batch- mate network and an innovative menu ensures glowing reports for the state govt.

THE FAREWELL DINNER: modelled on the Last Supper, it is given for senior officers who are about to kick the waste-bin – i.e., retire. It even has a Judas in attendance – the guy who is hoping to succeed the retiree. There is, however, a notable departure from the Biblical allusion: whereas Christ went on to a glorious crucifixion and rose again on the seventh day, the IAS worthy rises again the very next day, reemployed in some Commission or Tribunal. The farewell dinner is usually organised by Judas himself to ensure that the retiring potentate is artfully estopped from coming back into the service. It is not surprising, therefore, that on occasion officers have to be brought screaming and shouting to their farewell dinners. In my case the Chief Secretary had to send a bulldozer to ensure my presence (actually, the roads were snowed in, but I have a sneaking suspicion the CS was covering all contingencies!).

THE RAJ BHAVAN DINNER: no IAS officer ever wants to attend one of these ghastly death-watches, but an invitation from the Governor is actually an order. We go to such dinners half choked by “bandh galla” coats originally tailored in the Academy when we were chinless wonders, now wrapped around Adam’s apples of the extra large variety which would have shocked both Eve and the serpent. These dinners are solemn, if not funereal, affairs; the victuals are really quite good though the only spirit in attendance is one of nationalism. Ministers bump into senior bureaucrats, the Governor bumps into the furniture and everybody escapes as soon as he can after the national anthem has been played for the third time.

All ODs share two traits. One, there has to be a Chief Guest, who is generally a senior Minister or the Chief Secretary: although having one dampens the evening, it is a tactical necessity to ensure that Finance doesn’t object to the bill when presented. The Chief Guest (at least in Himachal, which I haunted like Banquo’s ghost for 35 years) just HAS to wear either a maroon ( BJP) or green (Congress) Himachali cap, depending on which party is in power. The smarter ones have now started investing in Aam Aadmi caps, just in case.

Second, and this is something Mr. Vinod Rai may like to look into when he has time from his six current assignments, is a peculiar feature in all OD bills: the number of chickens consumed ! The per capita average is two, which appears high even if we factor in the disappearance of all other shades of meats post Yogi Adityanath. Are IAS chaps such solid trenchermen, what with their selection grade ulcers and apex scale haemorrhoids ? Not really. The answer lies in the fact that since all liquor is impermissible at govt. dinners, and cannot be so billed, therefore this Hippocrene beverage is billed as chickens ! A peg of single malt is worth a whole chicken, a scotch two legs, a shot of rum is equivalent to a wing, a glass of wine equals a breast (its for the ladies, see) and so on. Quite ingenious, and definitely deserving of the two additional increments the IAS gets over its peers. And this also provides the answer to that much asked question: Why did the pair of chickens cross the road? Answer: they didn’t want to become a single malt !

Now that I live on a pension and am unable to cross that road too often I generally make do with KFC chicken nuggets.