The press release said that the Former union minister Arun Shourie and former foreign secretary Lalit Mansingh, among others, attended the modest award ceremony. The Tibetan leader was conferred this award for his adherence to the principle of non-violence in the pursuit for Tibet’s genuine autonomy.

Upon receiving the award in honor of the late professor, who was the first Indian to nominate His Holiness for the Nobel Peace Prize, the octogenarian leader said that time has come to make efforts to create a more peaceful world. 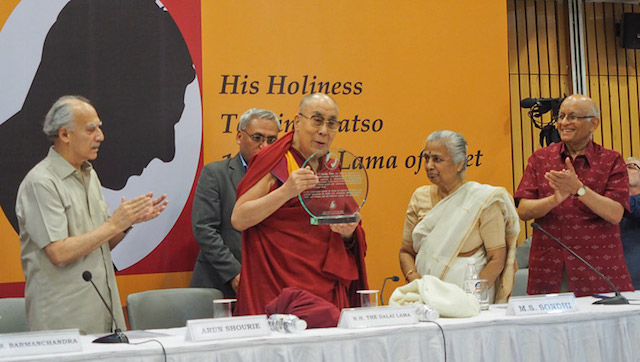 He said, “We all want to live happy lives but instead we are confronted by problems, many our own making. A hopeful sign, however, is that scientists have found evidence indicating that fundamental human nature is compassionate. So on that basis we may create a better, more peaceful world by the end of the present century—if we start to make the effort now.”

Talking about India Dalai Lama said, “Over the last 58 years I have eaten Indian dal and chapatis, while my mind is full of Nalanda thought. Physically and mentally I consider myself a son of India, so I can say to you ‘We Indians need to revive our ancient knowledge.’ Problems that we human beings have created, we human beings need to settle. It’s not enough to say ‘war is a part of human history’—nobody wants the misery it entails. To create a more compassionate world we need to employ reason, which is why I am committed to reviving what Indians of the ancient world understood. I have quite a sharp mind, but I need the help of people like you to put these ideas into effect. Since I am already 82 time is short—we need to make a start now.

Being a strong advocate of inclusion of moral ethics the Dalai Lama said that he is committed to enrich the modern education by taking a secular approach to human values on the basis of common experience, common sense and scientific findings.

On the sidelines of the event, the Dalai Lama dismissed any possibility of India-China armed conflict. The Tibetan spiritual leader said, “India is not a small country. It is gaining military power. So the only thing is compromise. The Chinese have to think about the situation inside Tibet when it comes to conflict with India.”

The Dalai Lama who has been in the national capital for the past days for his routine health check up will hear the report of the Core Committee working on the Curriculum for Universal Values before returning to Dharamshala.