Disclosure: I am a huge fan of Vishal Bhardwaj, but at the end of the day he surely deserves credit for being one of those rare breed of directors who can take out the maximum from an actor. Shahid Kapoor’s performance in ‘Kaminey’ and Saif’s dark character in ‘Omkara’ are testimony to the fact that a director does make all the difference.

‘Rangoon’ is the latest masterpiece from this ace director and should not be missed for anything. For starters Kangana Ranaut gives a memorable performance, in the character ‘Julia’. So tuned she is to her nuances that you actually forget in the first half that the movie has two leading men too. Her talent is exploited to the max and for a change she also gets a chance to display her dancing skills. On the whole what comes across loud and clear is that the lady means business and she is here to stay. Let’s not forget she is the reigning Queen of Bollywood, who just recently in a popular talk show declared that she had absolutely no interest in working with any of the Khans of the industry. Her natural style of acting, her accent and her body language are a delight. There are so many occasions in the movie when she will on her own make you laugh out loud, cry and just sit at the edge of the seat in anticipation of what will happen next.

Coming to the leading men Shahid too gives an excellent performance, that proves that over the years he has grown so much as an actor. And he has this versatility where he can play a complete Bollywood masala hero if asked and also play a superbly groomed actor, like he does in Rangoon. In this movie his dialogues are well written and he manages to convey loads in a few words and with just the expression in his eyes. 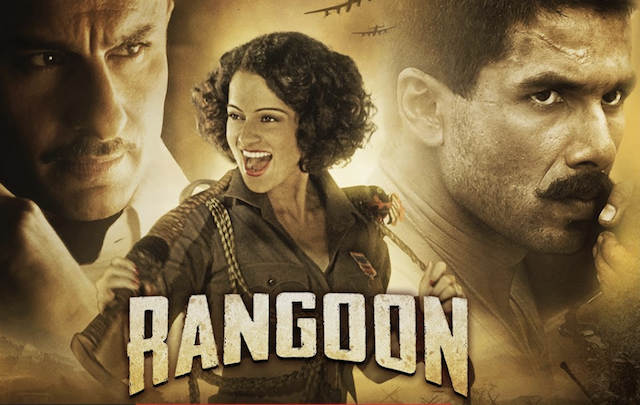 Saif Ali Khan too, delivers a stellar performance, and Vishal Bhardwaj manages to do that by asking him to perform in his comfort zone and just do what he does best. Play a jealous lover! The plot of the movie has the setting of World War 2, and that brings us to the main villain in the movie played by talented and well known actor Richard Macabe. He plays the character of a Maj. Gen in the British Army, who according to him has a ‘Hindustani Dil’. In the first half his poetic verses and quotes are very humorous, but in the second half they seem to be bugging at times. But on the whole he manages to get hated by every audience member and thats what every villain sets out to do at the end of the day.

The story and the screenplay team included Matthew Robbins, Sabrina Dhawan and Vishal Bhardwaj. Together they spin a plot that till the last reel you cannot take a guess as to what might happen next. The trailer of the movie sure reveals that it is a love triangle of the sorts, but that is just the tip of the iceberg. At the end of the movie you will question your idea of true love!

The music of the movie is by Vishal Bhardwaj himself and has some very memorable tunes like ‘Yeh Ishq Hai’ by Arijit Singh and others soulfully sung numbers by Rekha Bhardwaj and Sukhwinder Singh. The cinematography by Pankaj Kumar is simply brilliant and he manages to make us believe that locations in Tripura and Manipur are Rangoon/Mynamar.

The film editing by Aalaap Majgavkar is very effective and helps keeping the movie going at a steady pace. A special mention of Dolly Ahluwalia who was incharge of the costume design. She is the one who makes Saif look like a blue blood Parsi, Kangana the born enchantress and Shahid the jilted lover who carries his heart on his sleeve.

We give the movie 3 stars and 1 additional one for Kangana, who has time and again proven that if you have the right script, the right director, then even the leading lady can drive a movie to a huge success at the box office.

We are holding one star back, in anticipation of more master pieces from Vishal Bhardwaj!