The people who have no bank or balance or even petty little notes to exchange – they sleep well every night.

This is a mail from Gorakhpur, East UP.

Below are a few sample texts from two banks received as sms messages recently.

For your convenience, we have waived off all charges on cash deposits upto 30th Dec. Also all our branches will be open this Saturday and Sunday till 6.00pm

All our 3061 branches are open today & tomorrow till 6.00pm. Our staff is ready to help you deposit/ exchange your discontinued Rs.500/1000 notes. You can deposit any amount into you’re a/c without limits.

The time for change is here, and we consider it our duty to make every transaction a hassle-free one for you. Tell us how we can help you,  visit http://on.sc.com/2fm7vAz….etc ….we are looking forward to hear from you.

While the messages as a service may be appreciated, there are many slips between cup & lip.

You can only deposit more than two and a half lakhs if you can explain where you got it from and why.

Cash deposits of lesser amounts are welcome but normal withdrawals will be effected after a minimum of fifty days.

You can only exchange between two and four thousand rupees on any given day. And you can only withdraw up to rupees five thousand per day from your ATM account.

Six days into the mess and there are no signs of crowds abating.

Salaried persons have some security nets but there are vast numbers of people who have neither bank accounts nor debit cards. They are borrowing and cadging from whoever they can. There are vast numbers of mobile phone users whose phones are neither smart nor registered with a bank account. They buy thirty rupee talk-time coupons at the end of the working day and use it to speak and listen to music.

There are uncountable numbers of people who earn for the day and also shop for the day. We don’t know how they are coping. “Dhiari” is not being paid by those “Thekedars” who don’t have 100 rupee notes. The workers/ labourers have to wait.  It’s almost impossible to say for how long. The slight consolation being that the contractors also have to wait.

If there is anything to be in awe about, it is to know that the old old truth is alive and well, that those who have little, give whatever they can while those who have, give nothing. Employers are full of rules and reasons. The employees bemused, perplexed. 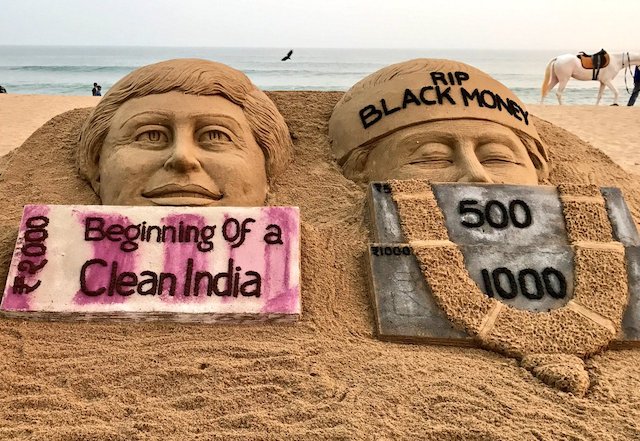 There are marriages coming up. Small big whatever. In these parts everything is measured. Dowry is alive and thriving and a family’s worth is judged by what they put out. I have no idea how they are coping. A father recently borrowed twenty five thousand a bit at a time from friends and family. It was all he could rustle up.

Gorakhpur’s well stocked shops are remarkably empty of people. A cycle rickshaw rider, into his sixties probably, burly and loud, pedalling slowly next to us in the traffic  jam on Bank Road near Gol Ghar, abused all and sundry, including Mr Modi and everyone else, for the chaos. Colourful though his language was and frequently obtained a little applause, the anger was what was hard-hitting. The plight too hard to contemplate.

Who did Mr Modi say this was going to benefit?

Assurances notwithstanding, the lines of people, either for exchange or for deposit, continue to spill out on to the streets – if not from the banks themselves (Monday 14th the banks were shut, perhaps for Gurpurab), then from the ATM cubicles closest to the branches.

The crowds, being as big as they are, stay well behaved for as long as possible. When shutters are downed after a few hours of dispensing cash, (sorry boss not today) inside the branches, the “privileged few” – not high powered privileged few, but people known to the employees, commercial customers, school accountants, relatives of bank personnel (Jaan Pehchaan walas) are slimed in. Fights break out. Inside it’s worse because the bank employees are fighting among themselves because everyone is claiming some connection or reason that is more important than the others. Ever since this started, cashiers and tellers have been working though the night with no time to eat …

It is virtually impossible any more, to deposit cash and exchange cash and carry out any other transaction (like a cheque paid RTGS transaction) in one visit unless you are prepared to spend the entire day. If you’re in the wrong line thinking exchange may happen earlier, and then want to move to the deposit line, you’d be told by your closest employee-acquaintance that you have no chance to get everything done on the same day.

The ATMs run out of cash. Very quickly. Some ATMs have not been seen open since the 9th. Not a single shutter was open on the route we take every day to and from work, which comprises more than 20 ATMs over a 26 – 30km drive one way and not counting the ones attached to banks. Till last morning (14th). By 5.00pm we saw crowds at three of the six dispensers in the Railway HQ estate. The rest were shut.

Institutions need petty cash for several small reasons: interviewees to be reimbursed; a sudden purchase of something needed urgently. You may get 20k for the week, if you are persuasive and in good voice. Otherwise wait.

If the Government & RBI were going to issue new notes anyway, why could they not have withdrawn one denomination at a time? The effect that they said they wanted (and did not get) would have been achieved just as well, done in bits, like a stone in a pond. Except that the ordinary and the less fortunate (but actually extraordinary) people would not have been put to so much distress. And now to top it all, we hear the new notes are wrongly sized so the machines can’t dispense and the little gnomes who sit inside are sulking.

For the seriously rich though, and this place has several powerful “Old Money” families, whose accountants (by their own account) are feverishly at work – in offices and later in the evenings at homes –  in order to make “adjustments” happen. What are “adjustments” ? They are adjustments of money and stock by people who own large scale businesses. So a shipment of TVs will be shown as sold and paid for by cash. That there was no time to move the stock to the client company even though the cash in hand had been received. Once things are regularised the TVs will disappear to whoever, without any further paper work. While this sort of “adjustment” may be, in global terms, pathetically small, it is big enough to be counted when roll call happens. Innocently shaking heads attached to benignly smiling masks.

Who did Mr Modi say this was going to benefit?

These are the people who were part of the decision making process; well prepared for the masque, enacting a pantomime of sacrifice and martyrdom, of self-righteousness, openly contemptuous of those not in their camp; executors of plans, in the confidence of those who have planned and who have visited this master stroke upon the country. You don’t get to such rarified places by gumption alone. What really counts is the money to match. And, the accountants say, the advance knowledge has made enough money for a political party to have enough money for a hundred elections. While all accountants are apt to exaggerate, being in awe for the bulk of their working lives, the ones with a little bit of soul, say, of privately owned institutions, the reasons and methods are what are simple to understand. What is unfathomable, is how they take and take and take, from a fully functional place and not put a thing back in but for paltry bits of top show.

They say it is not a matter of being forewarned, but how much of an integral part of the plan they are. Modi said (in sickly cloying maudlin tones, on TV, in UP, of all places) that the poor are sleeping well. No doubt he knows.

The people who have no bank or balance or even petty little notes to exchange – they sleep well every night. One on top of another mongoose style if they have a bed, otherwise limbs splayed on the good floor, stomachs sometimes filled with “panta-bhaat”, some times not, but at least the kids aren’t crying, always hoping for a miracle of a new day.

The Prime Minister was complaining about people possibly wanting to kill him and that even if he was being burnt (does this man have a fire fettish or what?) he would not stop this war against corruption for the sake of the country. He said he had sacrificed his home and family life for the sake of the nation. It was great. Heart rending. Well written, with an occasional choke of the throat. But if you don’t know what you are saying, just happy and pleased with all you hear, then your pronouncements tend not to mean much either. And the weavers keep clacking at the magical empty looms while the Empress waits.

Is Mr. Adani losing sleep? Or Mr Ambani of the Antila fortress? And whoever else transhipped from scooters to helicopters; from cycles to motor cycles, from junkets to Bangalore to world trips at the exotic unbelievable of the Canadian Tundra or ring-side seats to watch polar bears hunting or whales being killed, still diving obediently as the waters turn redder and redder with their harpooned blood?

How can people of such immense power and pelf allow themselves to be afflicted by the common man’s diseases of pennilessness? They are the most protected in the world. Our country has wealth barons the world recognises. A move of this size needs so much planning and so many options  and alternatives, all to move at lightning speed and simultaneously, that only at the very pinnacle of filth will some openness prevail. But that’s not going to happen by “demonetising” 500 and 1000 rupee notes.