Did anyone concerned ever ask the military if they wanted Karan Johar’s money?

So Karan Johar is adding nearly four times the sum that exists in the an Army Welfare fund as on date and he will add a slide at the beginning of the movie to profess his patriotism and appreciation of the Army (It may be better to use the term Military as it also includes Air Force and Navy by default). This done, he can sit back, relax and hope that the film will be a success and he has a reason to laugh all the way back to his bank. This is indeed a win win situation for all but the military. Maharashtra Nirman Sena (MNS) members are happy that their goon power has prevailed. Chief Minister can claim victory for brokering a deal between MNS and the film’s producer, not realising that his governance credibility has taken a severe beating in the bargain. The producer of the film will be happy as he can go about releasing his film and hopefully have the last laugh if the film rakes in money to swell his bank account. Without a doubt he looked pathetic in the video he circulated to profess his patriotism, love for his country and recording his appreciation for the military. Even a moron would know that the video was released because of capitulation to MNS threats and to protect his commercial interests. The fact that the deal was brokered at the expense of politicising and commercialising the very essence of the military establishment is not of concern to anyone. 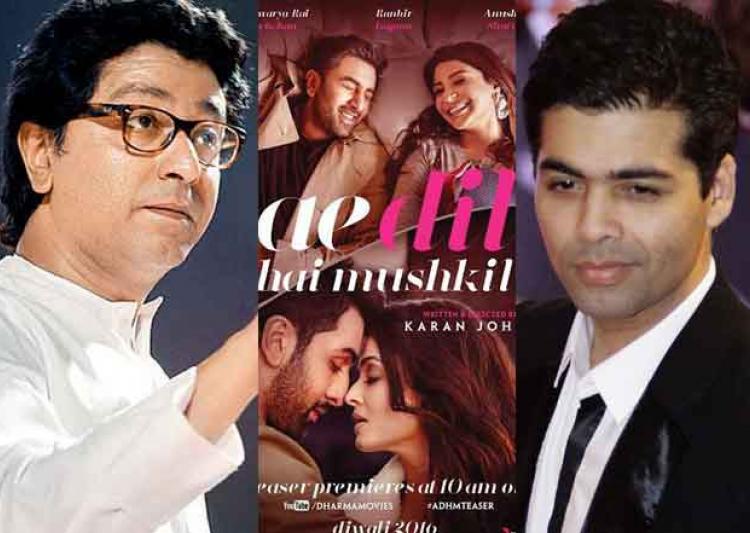 Did anyone concerned ever ask the military if they wanted Karan Johar’s money? Why the military was even mentioned in something that was obviously an act of extortion or flexing of muscles by local MNS goons?  Who has given MNS a lien on national patriotism and the right to enforce it by making threats or seeking money even if it is in the name of welfare funds for soldiers? Does the deal absolve MNS of its unlawful approach in the whole matter including open threats to vandalise movie halls that screened the movie? Who gave MNS or the Chief Minister the mandate to broker a deal by putting some money in a military welfare fund? Is there any reason not to believe that possibly MNS too may be richer in the bargain? Past history of Shiv Sena and MNS in this regard in Mumbai does make it hard to believe that MNS did not profit from this whole exercise.

The fund in question, Army Welfare Fund Battle Casualties (AWFBC), is a deplorable initiative taken by the Defence Minister in August 2016 to start a fund to look after war casualties. The very name sends wrong signals as it conveys a message as if the military and the government are seeking money from public to look after its martyrs, something that in principle they should be doing on their own as a matter of pride. If public or business fraternity want to do anything in this regard, it is best left to them to do it in their own way. Just for record, all that this fund has received in over 10 weeks of its existence is a measly 1.4 crores from a country of 1.3 billion. If a government does not have the will to look after its military veterans, martyrs and the families of those who sacrifice their lives for the nation, then the population of the nation cannot be expected to do so either. In any case a nation’s war casualties or military veterans cannot be left to the mercies of philanthropic acts of its citizens. It has to be the government that has to shoulder the total responsibility – cost to the nation notwithstanding. But then past governments in India have never fulfilled their responsibilities in this regard and the current government despite its many noises has also been found wanting, both in intent and execution. Disparities in salaries, reduction of pensions, non-implementation of One Rank One Pension (OROP), degradation of status, axing of perks in difficult areas on a continual basis, lack of employments opportunities after retirement are some of the issues on which a lot has been said and written but very little done to ensure a fair deal for military personnel.

Ms Shobha De, noted page three socialite and writer asks in an article in the times of India dated 23 October 16: “Will disrupting a film which features a Pakistani actor (please note: actor – not politician or army general) make us feel better about ourselves as Indians? Do surgical strikes against artists, writers, sportspeople achieve anything?” All one can say is that this purportedly educated lady needs to do some serious introspection to find the answers to these questions. It is obvious that in her single minded pursuit for fame, whichever way it comes, she seems to have lost part of her inner conscience and therefore the ability to understand the answers to the very questions she is asking. May be a small example in this regard may help her to seek the answers. Suppose her family had a decades old serious feud with another family close to their home on matters of principle that affects the very ethos of her own family. The feud tends to give her sleepless nights as also affects the well being of her family in more ways than one. In such a scenario would she allow her son to go dating with a girl in that family or allow her other children to socialise with that family? Will she allow her children to exchange Diwali gifts or continue business deals with the other family? Will she entertain members of the other family in her home? In all probability she will expect her family to refrain from any contact with the other family till the situation improves. No one will object if she or her husband, as elders in the family, work towards improving relations between the two families with a view to reach an amicable solution. This is exactly what India is expected to do where government represents elders and the citizens (artists, actors and writers included) are children in the family that is called ‘the nation’. Case rested.

Military widows and families are a brave and proud lot without any doubt. But behind that composure is a soul that cries for her husband on a daily basis and it yearns for his presence at each step which she takes alone in this harsh and tough world. The children miss their father every day while they are growing wondering what kind of life they would have had if their father was alive. They probably cry inside every time they see a complete family comprising of father, mother and children happily going along in this long journey of life. It is the same journey that the wife and children of a martyr have to undertake without the presence of the father. The very thought of such an eventuality will turn some people cold; imagine the plight of those who actually go through it. Would it not be in order if other citizens of the country showed their solidarity with these families voluntarily – not just in words but in deeds, however small they may be? As far as families of martyrs are concerned they will never ask others for such solidarity and demean themselves.

A soldier does not go to war to defend his nation because a citizen asks him to do so. He does so voluntarily because of his love and belief for his country. If the people of the nation are behind him in the hour of need, his valour and morale goes sky high that helps him to perform even the impossible at times during the course of his duty. In absence of a government directive, the choice of doing business or cultural exchanges in difficult times with people from Pakistan has to be exercised by individuals or organisations based on their own ethos. If the interests of the nation are kept above personal interests, then the decision will never be wrong. Many of those supporting Karan Johar have suggested that let the movie be released and choice of watching the movie be left to the people. Does this not underline the fact that the producer of the film is solely concerned with his commercial interests and not the needs of the nation at this critical hour? Why do we forget that at times a singular act of patriotism can motivate millions of other citizens? But then to do that one has to rise many notches above the normal and show a lot of character. Unfortunately many in the show business have failed to do that in the current difficult environment.