SHIMLA: The AICC incharge of party affairs in Himachal Pradesh and senior Congress leader Ambika Soni on Monday said that there is no factionalism in the party and the government led by the Chief Minister Virbhadra Singh and PCC led by youth leader Sukhwinder Singh are working efficiently. Despite of visible differences in past few months where both the factions had met the party vice president Rahul Gandhi and apparently complained against each other, Ms Ambika Soni tried to create a balance and praised the functioning of both the government and the party organisation in the party’s general house today. She even bracketed senior leader Vidya Stokes with Virbhadra Singh as the senior most leaders of the party in the entire country. 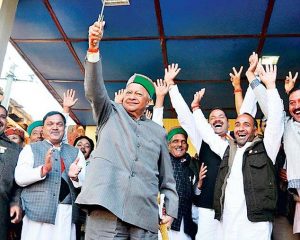 Former Union Minister Anand Sharma was also present in the general house and was seen discussing the party matters with the Chief Minister and other senior State leaders. Although both were not able to see eye to eye a few years ago, showed no signs of bitterness and were mutually appreciating each other today. Mr. Sharma has condemned the Prime Minister’s sardonic comment against Virbhadra Singh in his media interaction on Sunday.

While hinting at not changing the State party president Sukhwinder Singh despite of Mr. Virbhadra Singh’s frequent complaints they said the party would be led by a combination of youth and experience in the coming times.

No other senior leader from the State including the Rajya Sabha MP Anand Sharma, senior ministers like Vidya Stokes and Kaul Singh have raised the demand of removal of Sukhwinder Singh from the PCC chief’s post. However Chief Minister Virbhadra Singh who did not raise the issue in the general house today has shown his bitter resentment against Sukwinder Singh for adjusting his adversaries in the party on important organisational posts. He has repeatedly mocked these appointments and has said that such people who are not able to win even local elections have been made secretaries by the PCC.

But as an astute politician, the octogenarian Chief Minister wants to fix his maximum supporters in the organisation also since the assembly elections are approaching, said the inside sources. The PCC chief is the biggest obstruction for Singh who also wants to launch his son in the next elections now, they said.

His wife had lost the Lok Sabha elections from Mandi in 2014 in the Modi wave. All four seats were won by the BJP from the hill State.