The Himachal Pradesh Town and Country Planning (Amendment Bill) 2016 for regularising the unauthorised structures in the state, was passed by the state assembly in July this year. Such regularisation of unauthorised constructions/ encroachments on public land will render a number of enactments like Indian Forest Act 1927, Himachal Pradesh Land Revenue Act, 1953 and Town and Country Planning Act, 1977 nugatory and otiose. The letter and spirit of these enactments is likely to be obliterated all together by showing undue indulgence and favouritism to dishonest persons.

The State government, Himachal Pradesh also released its first ever Disaster Analysis and Management report in September this year. The report has been compiled by the Economics and Statistics department and the analysis reveals district wise disaster vulnerability with regard to earthquakes, flash floods, landslides and avalanche hazard. The report has advised the state government to consult its provisions before considering any kinds of relaxations in the towns and districts of the state. The report reveals that in terms of overall vulnerability many parts of Shimla district including Shimla city fall in the high vulnerability list. Similarly, a study undertaken in 2015 by School of Research and Training in Earthquake Engineering, Roorkie, has pointed towards the plate movement in Shimla region. Shimla is in zone IV, but it is leaning towards zone V, making it highly vulnerable to an earthquake and serial collapse of unsafe structures can lead to major catastrophe, the study concluded.

In the year 2006, the Geological Survey of India (GSI) had also come out with a survey, declaring that a whopping 25 percent of the area in old Shimla is unsafe as it falls in the sinking zone. The majority of the 175,000 population here lives in old Shimla, which was built as the summer capital of British India in the early 19th century. According to the GSI survey, “At least 25 per cent of the area in old Shimla isn’t suitable for house construction and if proper drainage and sewerage steps aren’t taken, the unsafe zone could rise to 35 per cent in 30 years.” The survey was conducted to study the nature of the soil in the city and it found that the southern regions of Fingask, Shankli and Kaithu were fast turning into a sinking zone. The heart of the city, including Ram Bazaar, Lakkar Bazaar, Krishnanagar, Lalpani and Kanlog, is almost entirely in the sinking zone of the state. Several buildings in downtown Shimla have been declared unsafe for many years. There have also been rising cases of newly constructed buildings collapsing in Fingask and adjoining areas in the southern parts of the city in recent years, especially during monsoon. Landslides; road collapse causing large scale damage and chaos are increasing in frequency. 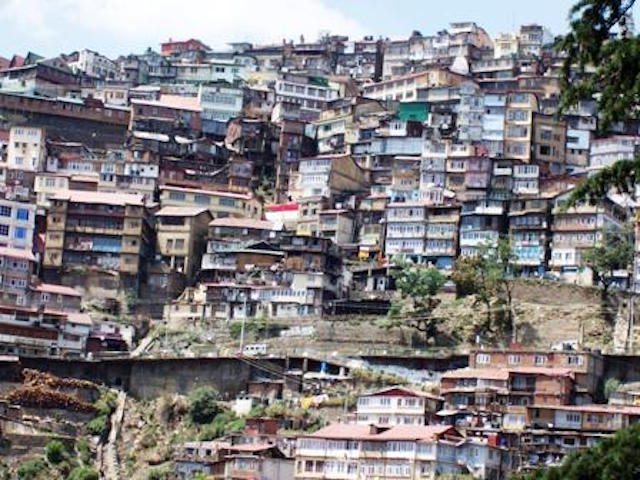 This large scale and creeping growth of ‘sinking zones’ clearly indicates that there is massive soil erosion happening in the Shimla hills, the lifeline of Shimla city, due to over-construction, population pressure (that grossly exceeds its carrying capacity), water use, de-forestation etc. It shows that the ecosystem of the Shimla city has become dangerously unstable; it is a disaster waiting to happen, that can lead to a terrible catastrophe at any moment. It is not a question of allowing a few illegal constructions in the city; one needs to see the City-Hill-Forest ecosystem as a single integral system and examine holistically what is happening. We see gross violations of the Forest (Conservation) Act of 1980, the Environment Protection Act, 1986. We also see the blatant violation of the Disaster Management Act, 2005 that makes it the legal duty of the State and Central government for “prevention of danger or threat of any disaster; and “mitigation or reduction of risk of any disaster or its severity or consequences”.

In fact all the researches and reports by competent specialist authorities and the Himachal Pradesh Government, including the Disaster Management Plan for Shimla City (2012 by DM Cell, Municipal Corporation); the “Heritage of Shimla” report prepared by the Department of Town and Country Planning; the latest Draft Development Plan for Shimla planning area available in the website of the TCP department articulate the same grim scenario. Finally, the latest and the most comprehensive study of the situation and problems of Shimla in the context of studying the impact of construction inside the Green pockets was prepared in the year 2013 by the Society for Environment Protection & Sustainable Development ((SEPSD) – A special purpose vehicle under the Department of Environment, Science & Technology. After detailing the terrible multi-level disaster potentially capable of engulfing the City, it recommends: “Complete ban on any type of construction activities in entire Shimla planning area including 17 green areas and renovation of existing buildings in private as well as government sector. …”

Keeping all this in mind and taking serious note of “retention policy” being brought from time to time to regularise illegal structures, a High Court bench in May 2015, comprising of Justices Rajiv Sharma and Tarlok Singh Chauhan restrained the respondents from introducing any retention/regularisation policy, guidelines or instructions thereby permitting regularisation of unauthorised structures. In a 29-page strongly-worded judgment this division bench pointed out that even though the latest studies indicated that most of Himachal Pradesh fell in seismic zone V and the remaining in zone IV, this fact had failed to move the authorities in Shimla.”It is high time the building bye-laws are suitably amended by taking into consideration the recent seismic activity in the entire Himalayan region,” it said while asserting that illegal structures won’t be regularised.

Again on the 30th of August, referring to the Town and Country Planning (Amendment) Act, a High Court bench comprising Justice Rajiv Sharma and Justice Sureshwar Thakur, observed that the action of the state government to regularise the unauthorised construction/ encroachments is suggestive of non-governance. Permitting the unauthorised construction under the very nose of the authorities and later on regularising those amounted to failure of constitutional mechanism/ machinery. According to the court thousands of unauthorised constructions have not been raised overnight, the government machinery was mute spectator by letting the people to raise unauthorised constructions and also encroach upon the government land. There are thousands of buildings being regularised, which are not even structurally safe. The Court further observed that the haphazard unauthorised construction carried out all over the state would pose a grave threat to the life and property in case of earthquake of severe magnitude, the high-rise buildings would cause tremendous damage to the adjoining buildings. The court further directed the Director, Enforcement Directorate, Union Ministry of Finance, to register cases against those persons who have encroached upon the huge tracts of forest land and have planted fruit bearing trees and amassed ill-gotten money and also engaged in money laundering within three months. It also directed the state government to provide necessary details of the persons, who have encroached upon more than 10 bighas of forest land and have also indulged in money laundering within four weeks to the Director, Enforcement Directorate to enable it to register cases against them. It further clarified in its order that it shall be open for the Director, Enforcement to confiscate/forfeit the property of the persons, who have encroached upon more than 10 bighas of forest land under the Prevention of Money-Laundering Act, 2002.

While the Ministers and the Administrators argue that demolition of such a large number of un-authorized constructions is neither feasible nor desirable as it will result in undue hardship to the owners and occupants. And hence consider it more appropriate to make a special one-time provision for composition of offences by charging deterrent composition fee instead of demolition of large scale un-authorized constructions, the sheer number and extent of violation on the other hand is why such a bill should never actualize. Also Illegal structures construction increased overnight since the bill was passed by the Vidhan Sabha. The fact that the bill has not been approved by the Governor is heartening. If such a bill was to become an act, Shimla getting extinct is also only a matter of time. It is appealed that the honorable office of the Governor, Himachal Pradesh may in the spirit of Article 21 of the Constitution, assuring “right to life” not give sanction and approval to the Town and Country Planning (Amendment) Bill 2016.

Dimple Vahali Oberoi, a research writer and Yogendra Mohan Sengupta, an environmental scientist have contributed towards researching and writing this article.

Dr Richa Minocha is a researcher, environmentalist and a writer.

Dr Richa Minocha is a researcher, environmentalist and a writer.