Chandranahan lake which is considered the point of origin of the Pabbar River is located on the south-eastern slopes of the main Himalayas which lies to the north west of Rohru in Shimla district of Himachal Pradesh. It is a highly revered lake for the inhabitants of the valley. Our guide, a resident from Janglik, for the trek to ‘The Moon Lake’ narrated that the Devta at Rohru ‘Devta Shikru Maharaj’, has its origin here and visits the lake for a ritual bath, once in every eight years or so. The Devta’s devotees consider the lake a sacred abode of Goddess Kali, who in turn is considered the caretaker of all the people living in the Rohru valley. The trek to Chandernahan takes you to a maximum altitude of around 4200 meters above sea level. It is a moderate level trek, suitable for most people aged between 15 to 60 years. However, today it is a road less travelled, not known to many ardent travellers.

It was 16, September, 2015 when I along with Dr. GS Goraya (Dy. Director General, ICFRE, Dehradun), and colleagues Brijbhusan and Pankaj Kumar from Himalayan Forest Research Institute, Shimla, set out on a two day trek to Chandernahan. We started early from Rohru and had breakfast at the roadside hamlet of Tangnu. The road journey from Dhamwari onwards is not pleasant at all, the road conditions was painful. We were to travel upto Janglik by vehicle, but since the bridge below Janglik was damaged, we had to leave our vehicle and continue on foot. The porters were waiting with their mules; the tenting equipment, etc, loaded we set out on our trek.

The journey continued uphill towards Janglik village, within the serene beauty of the mountain landscape. From the valley below, hum of fast flowing Pabbar rivulet reached as natures music. The uphill climb in the sun was far from pleasant, and many breaks were taken at short distances. We reached Janglik sometime around 12 noon and spent some time at the village temple, admiring the neat woodwork and a display of wild sheep trophies, put up in plenty. This village is a must to see as it is among the last bastions of the actual traditional culture of rural Shimla. One is left pondering whether it is really the 21st century. Here time seems to have hardly moved. It speaks of sheer neglect, being just about an hour’s drive from the Tehsil headquarters at Rohru, and development is a far cry. The trek continued uphill slowly, alongside neatly laid terraced fields of buckwheat (ogla), foxtail millet (kavni) and barley (jau). Higher up we came across villagers cutting grass, in full attendance for the annual fodder heist, as insurance to feed their cattle during the harsh long winters. It was here that we stopped for an awe-inspiring lunch of “parontha” and “lassi” (local buttermilk from the village). 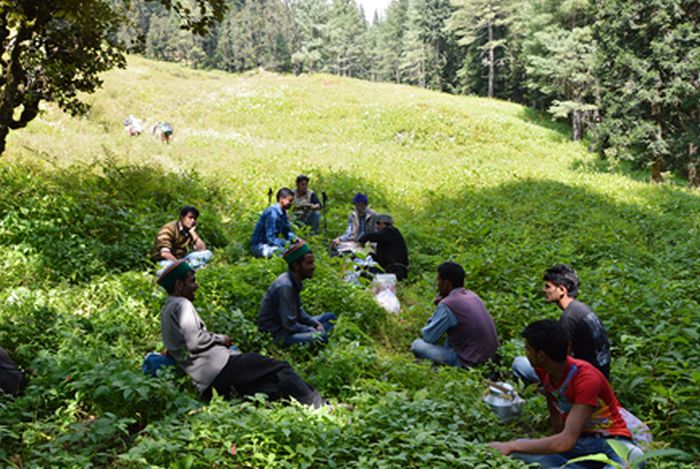 After lunch we slowly began to climb the winding trail through the lovely brown oak (Quercus semecarpifolia), bird cherry (Prunus cornuta) and high level conifer forests of fir (Abies pindrow) and spruce (Picea smithiana), with occasional blue pine (Pinus wallichiana) and the western Himalayan yew  (Taxus contorta) tree around. Soon enough the first of many thatches (meadows) was in front of us. From here onwards was a gradual ascent and after about an hour of ascending through sub-alpine pastures intermitted with bhojpatra (Betula utilis) and some Himalayan web fir (Abies spectabilis) trees the trail opens up to more greener pastures. Here, in this utopia landscape, all tiredness is now forgotten. After walking for some distance, there opens up an amazing sight of acres and acres of green meadow scooped out of the mountainsides. The meadows are packed with countless cattle, sheep and goats from nearby villages. 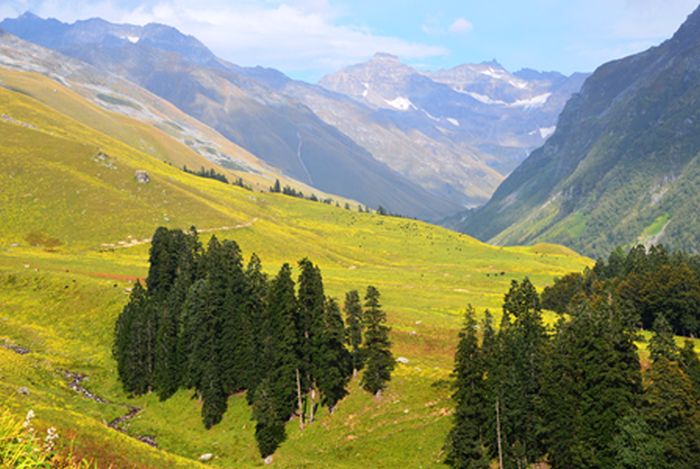 Mules and other cattle from the nearby villages are normally left to graze here, until the crops are ready to harvest below in the villages. Looking heaven wards one can watch the clouds drift in over the nearby mountain peaks, in a slow swift rhythmic motion. It is all too amazing…mesmerising to the core.

We decided to camp for the night at the sprawling Dayara thatch, surrounded by sheep and goats for company. A suitable camping site was soon found where we pitched our tents. We were just in time to pitch our tents as the weather became unpleasant and let loose rain and sleet followed by mild snow, the first of the season. It took an herculean effort for Brij and Pankaj to brave the inclement weather and cook something to eat for dinner. Hurriedly, we ate our meal and zipped up our sleeping bags to tide the cold night in our tents.

It was an early morning awakening by the sheep activity besides my tent. As I unzipped the tent entrance and peeped out, the icy cold air touched my cheeks and I smelt the freshness of the clean mountain air. In the east I could see dawn breaking out over the snow clad peaks. I have always been an ardent nature lover, and thus ventured out of the tent and surrendered myself before the unfolding marvel of nature. Far away from Shimla, my home and my family I was simply caught up in a trance, completely mesmerized by the mountain landscape.

Getting atop a nearby boulder and looking at the first rays piercing the horizon, let out a silent prayer. Deep within I felt energized that made my heart beat fast and faster. A wish escaped my thoughts to gather this spiritual feeling and make it last forever. Soon, I was joined by Dr. Goraya, who even at 58 years of age seemed as energetic as a school boy. Brij came along with very welcome hot tea and biscuits. It was like a prayer answered in such remote and scenic locales.  After a tidy breakfast we set off on the trail towards Litham Thatch. As we moved on, the panoramic views just kept getting better and better.

Towards the end of Litham Thatch there is a demanding climb, the target being the head of a tall water fall of about 40 metres, visible from Litham. This water fall is where the origin of the  fast flowing Pabbar River lies. We reach there in about an hour before the trail levels out to a gentle trail towards the lakes. The worst of the climb is now behind you and we are now at the periphery of Chandernahan, famous for its seven lakes, all located at an altitude of  4000 to 4100 meters above the sea level. 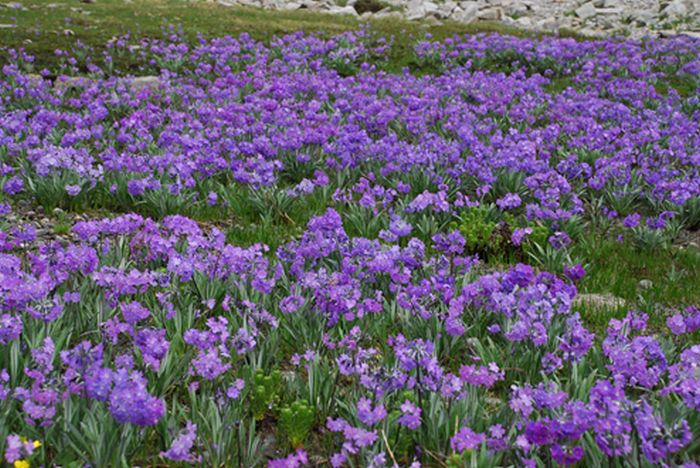 We walk our way leisurely through the lakes, supposedly seven of them through a mildly ascending trail. The lakes are smaller water bodies of crystal clear greenish blue waters. However, the last in the series is of greater volume and is truly alluring. The surroundings are covered with a carpet of purple- mauve primulas and dwarf rhododendrons. One is tempted to take off ones shoes and allow the feel of this natural carpet at your feet. The lakes are nestled amidst beautiful snow-covered mountains, towering on three sides. This time around we are surprised as the 7th Lake is almost a dry brown bed, unlike a previous visit made in July, some years back. The porters lay the blame on the weather. ‘The snowfall in the winter was not good enough,” said one porter. It left me pondering about global warming and climate change impacting the Himalayas.

Dr. Goraya had a surprise in store for me. He did remember my birthday and sure enough it was my special birthday – the fiftieth. He had brought a homemade cake for the occasion which was relished by the entire team. It made my day a special one, celebrating a birthday at such a sacred place, high up in my place of work, among the Himalayan lakes and peaks.

We all sat around the lake for an hour, trying to gather as much of the beauty spread out as possible to human sensations. Then began our journey back to base camp, reaching the road head by nightfall.

This trek has everything from deep virgin forests, gurgling streams, breath-taking mountain sides, miles of undulating meadows, amazing waterfalls and the feel of fresh mountain air as you climb from Janglik to the lake. The total walking time over two days was just 22 hours, but – ‘In the mountains,’ as they say, ‘travel is measured in time and not distance.’