Dharamshala: The Himachal and Punjab Gorkha Association is celebrating  the 100th year of its formation at Gorkha Bhawan Dharamshala  from 27th to 29th October . The association which was established on 29th October 1916 by Hon’ry  Capt Madho Singh Rana  to assist war widows and their families. The Gorkha is a marshal community and brought lots of laurels to the Indian Army and the forces of other countries including British Army , so why the brave Gorkhas are always considered the fittest soldiers . Since the independence of India in 1947, as per the terms of the Britain–India–Nepal Tripartite Agreement, six Gorkha regiments, formerly part of the British Indian Army, became part of the Indian Army and have served ever since. The troops are ethnic Nepali Gurkhas of Nepal and ethnic Indian Gorkhas of India.

The first award was made in 1858 to a British officer of the Gurkhas, John Tytler, during the campaigns that followed the Indian Rebellion of 1857, while the first award to a native Gurkha, Kulbir Thapa, was in 1915 during the First World War. When the Victoria Cross was initially established, Gurkhas, along with all other native troops of the British East India Company Army or the British Indian Army, were not eligible for the decoration and as such, until 1911, all of the Gurkha recipients of the award were British officers who were attached to Gurkha regiments.Until that time the highest award that Gurkhas were eligible for was the Indian Order of Merit. 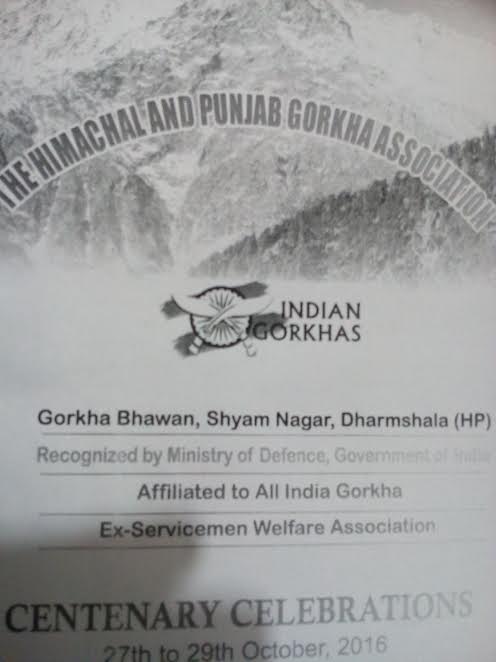 Since 1911 however, of the 16 VCs awarded to men serving with Gurkha regiments, 13 have been bestowed upon native Gurkhas. The most recent award was made in 1965 to Rambahadur Limbu, during the Indonesia–Malaysia confrontation. Along with the Royal Green Jackets, the Gurkha regiments are among the most heavily decorated Commonwealth units.

One of the organizer R S Rana said that the three day Centenary function shall have CM Virbhadra Singh as the Chief Guest on the concluding day,  with Local Minister of Urban development Sudhir Sharma. The other prominent guests shall be National Design Editor (The Economic times, Business Today and the Business World) Ms Jyoti Thapa Mani, Ms Rajni Vyas Mayor MC Dharamshala and many more.

Some Notable Indian Gorkhas, who captured some key positions in India.