The landmark building in Shimla which no tourist can afford to miss noticing is the Christ Church standing tall below the Jakhu hill on historical Ridge maidan.

It is the building that everyone wants to capture from different angles as a memory of one’s Shimla visit. The scores of professional photographers inviting tourists for photo shoots also insist to take this building in the background.

As we reach the building, we find that entry to the main sanctum is from a side door. As one steps inside one notices the huge glass windows decorated with beautiful paintings. The backdrop behind the statue of Jesus Christ too is dominently painted. On the side walls one cannot miss to notice marble  tablets inscribed with words of historical connections of people of the yore with this church. Behind the ally of benches with red carpets laid on the floor one notices a Baptising pond structure carved in marble. And the old souvenir shop sells the paraphernalia related to orship of Jesus christ from candles to statues and photo frames.

My anxieties on the history of the church grow and fortunately there is an old notice board there to help me out.

I learn that this Christ Church, is the second oldest church in North India, after St John’s Church in Meerut. Worship is conducted in Hindi and English once a week. 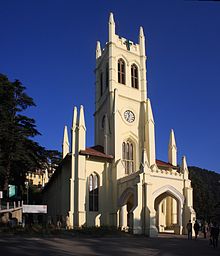 Built in the neo-Gothic style in 1857 to serve the largely Anglican British community in what was formerly called Simla, Christ Church is situated on The Ridge where it stands out as one of the prominent landmarks of Shimla. The silhouette of Christ Church is visible from miles around the vicinity of Shimla city. It remains one of the enduring legacies of the British Raj.

Christ Church has survived partition and the subsequent political upheavals on the Indian subcontinent. It continues to be very well maintained and remains in good condition. The clock, however, no longer functions.

From the historical inscriptions I learn that the first cornerstone of Christ Church was laid on 9th September 1844 and the church consecrated by Bishop Wilson of Calcutta / Bishop Thomas Daltry of Madras on 10th January 1857. Estimated cost of construction at that time was Rs 40000 to 50000. However the services began on 11th October 1846. The church was built of stone and brick in lime mortar by Col. J.T. Boileau. This was the first ‘proper’ church in Shimla. Till then, the church services were held in a thatched building on the Northrook Terrace on The Mall near the Telegraph office. The clock on the Church was installed in 1860. Original organ was installed in 1899 and extensively renovated in 1932.

This has a nave, channel and tower. The stained glass windows over the altar and the clock were placed in 1860. The floor has a centre aisle flanked by pews and two side aisles again flanked by pews. Heavy snows in 1961 caused extensive damage to the building and the pinnacles running along its length were dismantled. Even today the church has some interesting memorial tablets while the pews still mark the seats of the British Viceroy of India and the Commander-in-Chief.

The building thus truly restores the history of Britishers in India.