I am a fairly obtuse but stubborn 65 year old. I’ve had a dumb (as opposed to ” smart”) cell phone for the last ten years but have now come under intense pressure from my extended family (extending, that is, to UP, Bengal,Mumbai, Delhi and assorted jails in these states) to acquire a Smart 4G phone. For me this is a major culture shock: the only Gs I know are G Force and G -string and how, when the former acts on the latter, new worlds are revealed. At this stage in my life I don’t need any more Gs – I can barely cope with the afore mentioned two.

To convince me my sons tantalisingly hold out the promise of new dimensions via Facebook, Twitter, Snapchat, Instagram, Linked- in, Whatsapp, and of how I would be connected 24 x 7 with everybody and can follow all their activities. I am not impressed: I can conceive of nothing more distasteful than “following” Subramaniam Swamy on his venomous (character) assassination forays, or Salman Khan whose patently non-existent acting skills leave him sexually exhausted (he should see a doctor pronto), or even Arnab Goswami and his Disruptive Mood Dysregulation Disorder (temper tantrums, for those who went to Hindu college). Furthermore, I have no interest in seeing photos of what the food on your plate looks like (if you’ve seen my wife’s cooking you’d understand what I mean), or of your adorable pooch counting up to ten (most IAS guys can do that too – well, at least the junior ones can), or of you pumping iron at the gym like Robert Vadhra before setting forth on his next land acquisition spree. I also don’t want instant updates of  “breaking” news, i.e. members of Ram Sena breaking heads in Pune, riots breaking out in some UP town, Kejriwal breaking bread with the Vice President at an Iftar party, an epidemic of infant deaths breaking out in a Malda hospital, Vijay Mallya breaking a bottle of Champagne as he arrives at Heathrow with a billion dollars of our money, or the BJP breaking governments in Uttarakhand or Arunachal Pradesh. Breaking news is invariably depressing, and it will reach me inevitably, smart phone or dumb phone- what’s the hurry?

That’s exactly what I don’t want, son – after 65 years I’ve got kinda used to this life and don’t want to change it now. I know Google store has three million apps out there, not counting the one which tells you when your bowel wants to move, but I can manage my remaining years on this mortal coil without them. I don’t need one to tell me when I’ve done my daily quota of exercises – my gasping, monoxide filled lungs (I live in Delhi, see) signal that instantly. I also don’t need one to turn on the AC or the fridge or the microwave – I keep them on all the time in anticipation of approaching Alzheimers. And I can count my calories without the assistance of another stupid App – the count never exceeds a healthy ten, which is the limit of my mathematical prowess (I retired from the IAS, remember ?). 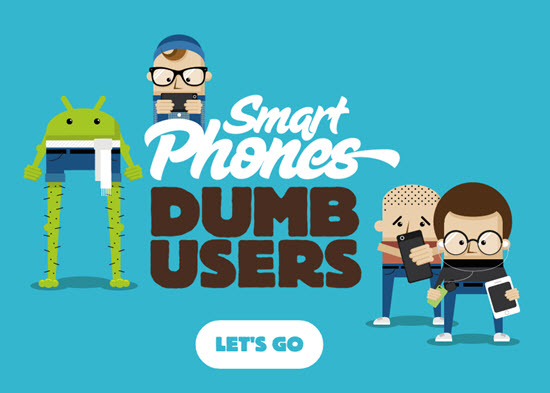 I don’t need a dating App either- these days I can’t even get a date from my wife ! And in any case I disapprove of this particular App which searches out an appropriate date for you in a nano second. In my time we did the searching the proper way – by hanging around outside LSR or IP colleges (Miranda House was reserved for the dudes from St. Stephens, so help them God) every evening, revving up our silencer-less bikes (equivalent to the mating call of the Silver-Back gorilla) and offering to ferry the chosen damsel to Khyber Pass for an aloo ka paratha. It never worked, of course, but look at the brighter side – we didn’t end up getting divorced, like the nano-second guys, on the first weekend after the nuptials. As the wise guy said: If you don’t do the leg-work you’ll end up doing the house-work.

Then there’s Ashley Madison (“Life is short, have an affair”). Probably the best piece of advice since the blonde said “If you can’t make it then fake it !” But who’d want to have an affair with a retired bureaucrat who’s more comfortable in bed with files than women ?

And finally, there are the issues relating to health and well being. I am in good health, all my organs are OEM grade original (unlike those of Rakhi Sawant, I believe), I avoid doctors like the Zica virus, and my heart ticks along nicely, except for a little fibrillation whenever I see an image of Sunny Leone- but I’m told that’s par for the course with Indian males who were deprived of sex education in primary school. And therefore I am alarmed by the new ailments and phobias that( international research has shown) are caused by the smart-phone. Here is a list of them:

* MOPHOBIA————– fear of losing your cell phone (it is NOT fear of Mr. Modi)
*NOMOPHOBIA———– fear of having no mobile phone.
* TEXTAPHRENIA——– thinking a message has arrived when it has not.
* TEXTIETY ————— panic attacks over not receiving or sending text messages.
* FOMO——————— fear of not being the first to read, share or comment on a tweet.
* SELFITIS—————– an obsession with clicking selfies – at least five a day.
* IAD———————— Internet Addiction Disorder- living entirely in the virtual world.
* SMA———————– Social Media Addiction – urge to use social media, check updates, all day.
* PVS———————— Phantom Vibration Syndrome- imagining that your phone is ringing.
* DIGITAL POUTING—– avoiding all contact with others by playing games, listening to music or watching videos on your smart phone.
* FAD———————— Facebook Addiction Disorder: endlessly posting pictures and waiting for  posts from friends on networking sites.

So wake up folks, its time to get seriously worried, especially if you are among the 20% who use their smart phone while having sex (the Blonde again:”You’re not the only thing turned on, honey !”), or the 84% who take their phones to bed, or the 15% who text while driving, or the 56% who check phones during meals. It looks like the human race is on course for another evolutionary milestone: it took us 7 million years to evolve from the Neanderthal man to homo habilis to homo erectus to homo sapiens, but it will take us just a couple of hundred years now ( thanks to the smart phone) to evolve into homo digitallis- a lump of protoplasm with two index fingers and two thumbs sticking out. Looks like God would have finally given us the finger!

Incidentally, I’m waiting for an App that will tell us when the next peg of single malt is due. I already have a name for it : GLENLIVITAPP. Live it up, right? Maybe I’ll consider a smart phone then.

I did not want to refer to politics of any kind in this piece but I cannot leave the reader without expressing my quiet delight at Mr. Javadekar’s exit from the Ministry of Environment and Forests. He has been, by a long shot, the worst Minister we have had in this Ministry. He was actually a mole representing the Industry and Power lobby and it will take years for our environment and wildlife to recover from his depredations. He sanctioned 90% of the proposals for Forest clearances put up to him: the rejection rate for him has been just 0.01% ! In just two years he has cleared 301 projects whereas in five years the UPA had cleared just 260; he has rejected only 4 projects as against the UPA figure of 68. He has done all this by wrecking the regulatory and oversight mechanism carefully built over the past decades, packing his Commissions, Committees and Boards with professional hangers on like Mr. TSR Subramaniam, aided and abetted by his Govt’s repression of NGOs.

Mr. Javadekar’s successor, Mr. Anil Madhav Dave has been a river conservation activist and hopefully we can expect more sensitivity for the natural environment from him, and a reduced promiscuity in jumping into bed with industry. This remains to be tested, however, because it is the PMO which calls the shots and it is quite clear by now that the PMO is only interested in GDP figures. We live in hope, however, and would expect that the first issues the new Minister takes up would be the insidious move by his predecessor to dilute the Coastal Zone Regulations and the attempt to allow corporates to enter forest areas for monoculture commercial plantations.