Kullu: A weak monsoon is proving to be a bane of apple and other fruit crops in the valley here as orchard owners and horticulture officers tabulate losses, with the government department putting the losses at about Rs 250 crores due to bad weather conditions in the fruit growing cycle this year.

Meteorological office for Himachal has reported a 26 % rain deficit so far in the state with some regions receiving 20 to 83% less rain than in a normal year. Kullu valley has registered about 17% less rainfall.

Ravi Thakur, a farmer from Lug valley and Jitendra Kharwal, an orchard owner in Kullu valley expressed anxiety over the prevailing dry spell.

Our farm being heavily dependent upon rain fed agriculture, the prolonged dry spell during a rainy season is very worrying, says Thakur. “Our rural economy totally depends upon farming, where a farmer toils for long hours in the hope of making good returns but if weather doesn’t help everything lies wasted.” 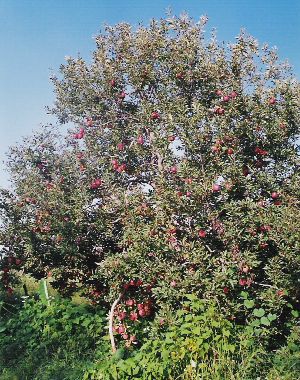 Khadwal said that dry weather conditions was affecting the fruit size at a time when harvest was fast approaching.

“There has not been sufficient rain this time which had directly affected the growth of fruits. Size of fruits such as pears, apple, plum have got adversely affected under such dry weather conditions and now we are even more worried about the fruits be attacked by many diseases,” he said.

When HillPost contacted Roshan Lal Sharma , deputy director horticulture, he said ‘’hailstorms that hit the valley soon after the fruit trees were in full blossom in April-May, less snow over the winter months and this long dry spell has caused a loss of about 5312 metric tons to the apple crop alone.”

Global climatologists have already declared that June 2016 was the hottest recorded in living history and its impact has also been felt in the fruit bowl valleys of Himachal Pradesh.
vagaries of

Another fruit grower Sanjay Thwas said, ”due to insufficient rain, size and quality of the fruit have been badly hit which would not fetch good prices at the market auction counters.”

The 2011 census had recorded about 89% of Himachal Pradesh as a rural habitat with much of the 68.65 lakh population holding agriculture as their main occupation that provides direct employment to about 69 percent of the working population.

Agriculture remains a major contributor to the hilly states GDP and within agriculture, fruits that to mainly apple, is the largest contributor generating an annual economy of over Rs 2500 crores.