Mathura incident occurred because the district administration had completely abdicated its role and authority over Jawahar Park to a rag tag bunch of land grabbers masquerading as a loony sect.

Last week’s mayhem at Mathura, which resulted in the murder of two police officers (and killing of twenty seven other “satyagrahis”) should have surprised no one who has been following the steady debasement of our polity, administration and societal mores. There are many disturbing aspects to this display of mob violence (which I am sure a conveniently appointed inquiry commission will NOT go into), but I would like to focus on perhaps the most alarming dimension of this lawlessness: the frightening deterioration in the professionalism of the administration, specifically the police forces of this country. No one could have failed to notice the steady, consistent and progressive decline in the ability of our police forces (no state excepted) to maintain order and enforce the law of the land.

It is very clear now that the Mathura incident occurred only because the district administration had completely abdicated its role and authority over the 270 acres that comprised the Jawahar Park, taken over by a rag tag bunch of land grabbers masquerading as a loony sect. They could not have moved in overnight: the creeping encroachment was obvious but no one stopped them. (The DM wrote letters to the Chief Secretary. Why? He had the powers to evict them, but instead he chose to create an alibi which will now stand him in good stead). The goons did not allow govt. officers, not even the City Magistrate, to enter the Park, beat up a police Inspector, terrorised the Horticulture department officials  inside, chopped down 3000 trees to build their huts. They continued to do all this for almost three years but no steps were taken to evict them: only notices were sent (more alibis?). The Allahabad High Court in June 2015 ordered their eviction: even this order was not implemented for one year.

The more frightening part. These criminals collected fire arms, grenades, crude bombs, gas cylinders to be used as IEDs. They built machans on trees (from which vantage point they appear to have shot down one police officer, the SP was reportedly beaten to death). Even a Bihar student (he doesn’t have to be a ” topper”) would have guessed that they were preparing for a major confrontation. Why couldn’t the administration and the police ?

The answer is frighteningly simple: they KNEW but they had either abdicated their powers in favour of politicians, or they lacked the professionalism to read the signals and take counter action. Or both. Before you take on an enemy you must try to know everything about him- the Mathura police had never bothered to do so and paid for it with the tragic loss of two of their own.

But here is what should trouble all right thinking Indians: Mathura is not an isolated case or an aberration- it is only the latest in a series of similar incidents which point towards an almost total collapse of the police forces in the states: the Muzzafarnagar communal riots, the most recent Jat agitation in Haryana, the beating up of students and journalists outside the Patiala House courts in the JNU case, the prolonged showdown with the followers of sect leader Rampal Dass in Hisar in 2014 , the unchecked rioting in Malda. All these challenges to the law had three things in common: the catalyst for all of them were politicians and political parties, the police and the administration either had no clue as to their intentions or had adequate foreknowledge of them but  did nothing to prevent the incidents, and when they did belatedly act they were hopelessly unprepared. These last two commonalities are prime indicators of the progressive disintegration of the country’s police apparatus.

Effective intelligence gathering lies at the heart of effective policing, but our forces have either completely given up on this or confine themselves to gathering only ” political” intelligence that serves only the interests of their political masters of the day. Nothing else can explain Malda and Mathura and the manner in which the authorities were taken by surprise at the sheer scale of the violence in both cases.

Even more alarming, however, is that, increasingly, the police do not act to prevent violence: prime examples of this are the Jat goondaism in Haryana, the Patiala House lawlessness in Delhi and the communal carnage in Muzzafarnagar. It is incomprehensible that a force which is mandated by law to prevent a crime can stand by idly and watch as public property is destroyed and citizens assaulted.

The nadir of this professional decay is achieved when the police, when finally forced to act, do so in the most incompetent manner: without essential intelligence inputs, unprepared with equipment, lacking any coordinated planning or clear strategy, depending solely on numbers. This results either in excessive use of force or casualties to their own members. It is this abysmal lack of professionalism that killed SP Dwivedi and Inspector Yadav in Mathura, not the followers of Ramvriksh Yadav. And if any further proof of this is needed, it is now provided by eyewitness reports now emerging that Dwivedi was DESERTED by his own troops when he was being attacked! They could have saved him- had they acted like professional and trained policemen. 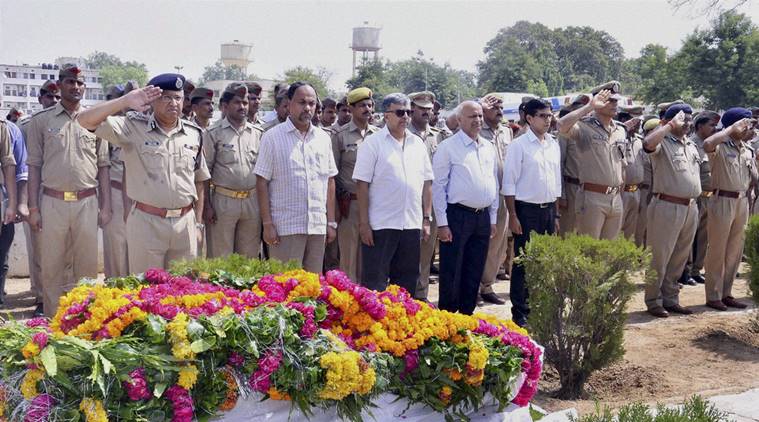 These two deaths are a metaphor for the precarious and diseased state of our police forces, which bodes ill for the country. A uniformed force which follows political directions rather than legal mandates, attaches no importance to training, neglects its intelligence gathering functions, relies on numbers and brute force rather than SOPs, does no planning for action and goes in unprepared- this is a recipe for disaster.

The Indian police is fast losing its professionalism, and appointing the likes of Mr. Bassi, the retired Delhi police Commissioner who famously refused to take action against criminals because of the ” risk of collateral damage”, as a UPSC member is one reason why. But responsible members of the force need to introspect whether the time has now come for them to do something to stop this slide, if not for the sake of the country then in their own interests. After every such incident it is inevitably the officers who are made the scapegoats and made to pay the price- never has a politician been held culpable, and the same scenario is playing out post Mathura. But the stakes have just got higher – they are now paying with their lives. Is political pandering, a favourable transfer and a post retirement sinecure worth the risk?

We Indians like nothing better than a good bargain, and in keeping with our obsession we now appear to have got two Prime Ministers for the price of one!- Mr. Modi (Abroad) and Mr. Modi (Domestic).

The Modi (Abroad) is most certainly now an international statesman: his speech at the US Congress the other day hit all the right notes: terror, environment and climate control, the India- US connect, the values of freedom and liberty, the tolerance of diversity, economic parternership. The quotes (Vivekananda, Martin Luther Singh, Walt Whitman) were bang on. Even the humour was appropriate and engaging and he deserved every one of the eight standing ovations. I have rarely heard a more stirring oration by anyone, Indian or otherwise.

But this was not the Mr. Modi (Domestic). Back at home he is an entirely different person. On terror he doesn’t appear to have any consistent policy on Pakistan, calling off talks one day and dropping in on Nawaz Sharif in Lahore the next day, holding the ISI responsible for the Pathankot attack but inviting the ISI to the crime scene the next. On environment he allows Mr. Javadekar to run amuck. slaughtering wild animals under the guise of “vermin”, persisting with the disastrous river linking scheme without proper environmental impact studies, nibbling away at National Parks and Tiger reserves, denotifying 10000 sq. kms. of the Western Ghats from the Eco Sensitive Zone. On diversity he will do nothing to stop the RSS and related cohorts from trying to make India a uni-polar Hindu Rashtra; on federalism he is constantly on the stump destabilising and dislodging state governments headed by other political parties; on freedom of thought and action he is doing everything possible to curb dissent, ban NGOs, censor films,police the net. On liberty and tolerance, he will not utter a word to condemn victimisation of minorities by lumpen bigots associated with his party.

Will the real Mr. Modi stand up ?