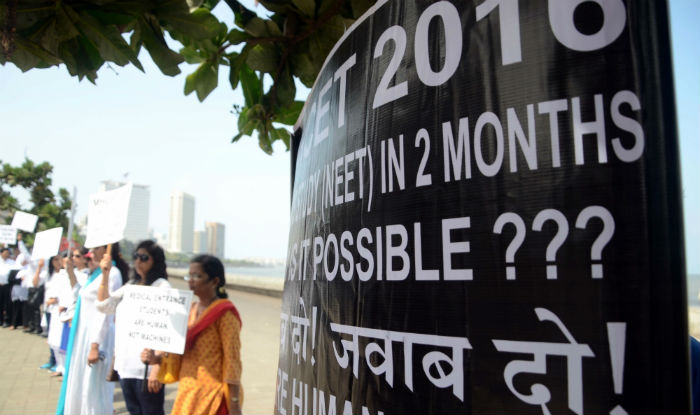 This was the first essential step to cleansing the Augean stables that medical education in India has become, reeking with corruption, capitation fees, dubious “management quotas”, lack of uniform standards, multiplicity of admission tests for harassed students, patronage and rent seeking. This putrescence had been given the stamp of approval by the Supreme Court itself, unfortunately, in a perplexing 2012 judgement by the then Chief Justice. By setting aside this dubious order last month and restoring NEET the Court has given a glimmer of hope that the rot would be stemmed.

Enter Mr. Nadda. He defends and supports NEET in court but comes out and issues an ordinance on May 24th, deferring it for a year for all government colleges and government seats in private colleges! This is where he doesn’t know who to run with and who to hunt with. We just don’t know whose interests he has at heart: the long suffering students and the unfortunate patients long exposed to inferior doctors churned out by the present system, or the incompetent and sub-standard State Boards and the state politicians who can always “manage” the state quota seats?

Mr. Nadda has only muddied the waters further, and made confusion worse confounded. NEET I has already been held on 1st May 2016 when 650000 candidates took this exam; what is their status now that NEET has been partially deferred? The ordinance is sought to be justified by stating that the candidates did not have enough time / notice to prepare for it; that NEET will be based on the CBSE syllabus whereas the existing admission Exams were based on state Boards syllabus, as such the latter will be at a disadvantage compared to those from CBSE schools. These arguments are self-contradictory. Since 650000 students have already taken NEET (many of them not being students of the CBSE syllabus) will they not be at a disadvantage now compared to those who will now be allowed to take the exam conducted by the state Boards? Secondly, by creating a distinction between Government Medical Colleges and Private Medical Colleges and making NEET applicable only to the latter, Mr. Nadda has created two parallel streams of examination, which is not only illogical and discriminatory but also unfair. And finally, doesn’t he realise that the whole idea of NEET is to have a uniform standard for testing candidates ? By opposing NEET precisely on this ground he is succumbing to pressure from states who have all ten crooked fingers in this pie.

Mr. Nadda may think he has got breathing space for one year at least. These issues will still be there next year also. He has only deferred the day of reckoning till the Supreme Court takes up hearing of the plea challenging the ordinance. He has betrayed the trust of the Court – The specious arguments he is now making should have been presented to the Supreme Court when the matter was being heard there. Not only did he not do so, he actually supported NEET ! He may yet discover that the ordinance route was an unprincipled one and he will ultimately end up pleasing neither the hares nor the hounds.

Strange indeed are the ways of God, and stranger are the ways of governments! At a time when we are being fed poisons in everything we eat, drink and breathe (the latest being our daily BREAD, as per a recent report of the Center for Science and Environment), instead of doing something tangible about this the government has instead decided to launch an all-out war against a humble condom!

It appears that Durex has been marketing a brand of condoms called Extended Pleasure and Kohinoor Extra Time (how subtle can one get?) for the last 15 years; their USP is that, coated with a mild anaesthetic drug known as Benzocaine, they delay the onset of climax and hence offer more value for money. Apparently, since this is a government that wants to fast track everything and frowns on any kind of delay, it has ordered Durex to stop production and sale of these brands, on the ground that it had never approved this drug as a coating on this prophylactic. The Delhi High Court has benzocained this order, i.e. stayed it. The case will no doubt be decided after due intercourse is held between the parties and many adjournments (termed Extra Time in this case) are granted. But to my mind this case raises a couple of interesting questions. One, does a stay order on the use of a condom amount to “coitus interruptus” ? And two, if chaps who have been using this addictive contraption for many years are suddenly denied its use, will they not develop withdrawal symptoms? And finally, should the government not also verify whether the fruit flavoured condoms (favoured by vegans, I’m told) have the approval of the Food Standards and Safety Authority of India? After all, as the old adage goes, one man’s fruit may be another man’s condom.

Weighty questions which I have no doubt the Court will strip bare eventually: the culmination, however, could take a little time, given the nature of the subject.

Very few of us would have heard of Phyllis Diller ( 1917-2012). She was an actress-comedian who created the ” Dillerism” – a brief, pithy aphorism remarkable for its subtle wit, association of ideas and earthy wisdom. I reproduce below some of my favourites, sent to me by a friend from the United States:

* Whatever you may look like, marry a man your age.
As your beauty fades, so will his eyesight.

* The reason women don’t play football is because 11 of them would never wear the same outfit in public.

* My photographs don’t do me justice- they look just like me.

* I admit, I have a tremendous sex drive; my boyfriend lives 40 miles away.

* You know you’re old if they’ve discontinued your blood type.

* A bachelor is a guy who never made the same mistake once.

This is real humour and wit – it makes you chuckle silently and smile to yourself, not laugh out loud. That would be All India Bakchod, burlesque masquerading as humour. Give me a Dillerism any day.