If we are to go by the CBSE’s just released results for the 10+2 exams we have nothing to worry about- India is a country of geniuses! Of 10,67,000 candidates who took the exam 90000 scored more than 90%, and 14000 scored more than 95% . Even more amazing, students have scored 100% in subjects such as English, Psychology, History, Commercial Arts, a feat the likes of Shakespeare, Freud, Michaelangelo and Andy Warhol would find hard to match. The country topper scored 99.4%.

How on earth can one score 100% in these subjects or 99.4% in the aggregate? In my time a 75% was considered exceptional and anything above that prompted a judicial inquiry. Perhaps the answer lies in the response of one student (Urna Chakraborty of Springdales, Pusa Road, Delhi) when asked how she secured 100% in History: ” History is a very interesting subject. I memorise everything in detail for my exam.” (Emphasis mine). It would appear that what CBSE is testing is rote learning and not true understanding and assimilation of a subject. It is also indulging in lazy question setting and rote marking. This is not promoting genuine education and learning but encouraging phenomena like the Kota model of education which is churning out thousands of tunnel vision cyborgs who go on to secure engineering degrees and then find themselves unemployable. Indian industry has been complaining about this for some time and now even the IITs and IIMs have started changing their admission processes to test for real knowledge rather than memorised data. Even some leading Universities and Colleges now prescribe admission tests rather than simply go by the 10+2 results. It is time CBSE realised the damage it is doing to the education template in the country by its ridiculous system of marking. 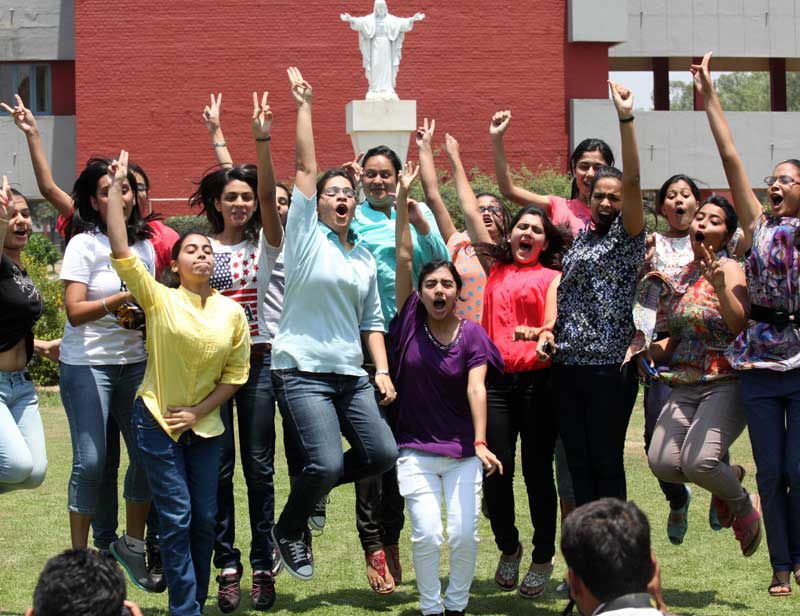 It is also causing real harm to the psyche, and even the lives, of students who cannot withstand the immense pressure exerted by a system where even a score of 80% brands one as a failure. This year itself a student of Naraina who secured 60%, unable to face his parents, killed himself by hanging himself from a ceiling fan. A dozen students kill themselves in Kota every year. CBSE’s toxic assessment process inturn leads to cut-offs in universities that are even more ridiculous: last year one college in Delhi had a cut-off of 101% for a particular subject! By these standards I and all my friends would be deemed to be only half-literate because none of us got more than 65% in college; the one illiterate among us (he failed) later on went to become a crore-pati ! Last year one Shivani Mohan who secured 92.5% in her 10+2 but failed to get into St. Stephens or Lady Shri Ram took admission in a leading university in California. Come on Mrs. Irani, there has got to be something wrong with an assessment eco-system where it is easier to get admission in a US university rather than in a Delhi college. Please do something about it before heading off to UP as the BJP’s Chief Ministerial candidate.

It is encouraging to note that the Supreme Court has once again dismissed the appeal by the taxi operators of Manali (supported by a vision-less state govt.) against the NGT orders restricting the number and type of vehicles going up to Rohtang pass. Even the 1200 allowed so far is a thousand too many. But it is distressing to note that , apart from enforcing the NGT orders in a ham handed manner, the Kullu administration is doing little else to devise alternatives to minimise its effects on tourism in the valley. It should by now have fast tracked the installation of the rope-way from Palchan to Rohtang, but the govt. appears to have done precious little about it in the last four years, apart from cancelling the tender floated in the last months of the Dhumal govt. for no apparent reason. Electric vehicles is another solution, and one would have expected that the govt. would have gone out of its way to promote this pollution free mode of transport. Instead, as reported by Hill Post a few days ago, it is harassing someone who has displayed individual initiative to procure an electric taxi: Mr. Buddhi Prakash Thakur has been running from pillar to post to get his battery driven taxi registered with the Transport and Tourism departments- with zero success so far. By now the state govt. should have framed a policy for registering of E- vehicles; if it lacks the ability to do so it should simply adopt( with suitable modifications) the policy prepared (and implemented) by the Delhi govt. I would also advise Mr. Thakur to shoot off a letter to the NGT immediately- governments nowadays work only on court orders.

Incidentally, the govt. has ordered 20 electric buses for the Rohtang route, to be operated by the HPTDC. Once these buses arrive the govt. should ask the NGT to reduce the permissible number of cars by 200, to 1000, since one bus is equivalent to at least ten cars. This way the vehicular load will not increase with the addition of the buses. I have a feeling that the state govt. would not be too keen to do this, so perhaps our environmentalist friends or NGOs could initiate this measure.

The general level of political discourse in this country keeps declining with each session of Parliament and with each election, and even lady opponents are not spared. Degenerate comments on each others’ character, parentage, integrity, morals etc. are the order of the day. To my mind, this reflects the diminishing caliber of the people we elect to office, their lack of genuine education, their limited intellectual capacity and their total inability to indulge in the cut and thrust of genuine debate. In contrast, it is a pleasure to watch, or to read of, the proceedings of some other parliaments, especially the British Parliament. I give below two historical exchanges between MPs in the House of Commons, just to grasp how far removed we are from the Westminster model (which we purport to follow):

* A Member of Parliament who was speaking on a subject he thought was important was irritated to see that Winston Churchill was dozing in his seat. He thundered: ” Mr. Churchill, must you fall asleep when I am speaking?”

Churchill roused himself, calmly replied: ” No. sir, its purely voluntary” and went back to sleep.

* On another occasion, this is how two peers of the realm explored each other’s characters in the House of Lords:

MONTAGU (to Wilkes) “Sir, I do not know whether you will die on the gallows or of the pox !”
WILKES: “That will depend, my lord, on whether I embrace your principles or your mistress!”

When will our legislators realise that the rapier is far more effective than the bludgeon ?