Think BIG when it comes to breaking the law

We are a strange country: our leaders and the elite are small minded in just about everything they do but think BIG when it comes to breaking the law. As no doubt befits a country which is almost a continent and will be the world’s most populous country in ten years, size does matter in India as the two individuals hogging the headlines this past week demonstrate so effectively – Vijay Mallya and Sri Sri Ravi Shankar.

The two, at first impression, could not be more removed from each other: one is a connoisseur of the willing flesh, the other a shepherd of the lost soul. But look more closely and you’ll discover that the two are more alike than different. They are both shadowy entrepreneurs par excellence, networking artistes, possessors of outsized egos, both have been selling dreams for years to gullible investors – Mallya to those who invest in the stock market and Ravi Shankar to those who invest in the futures market of a divine afterlife! But what DOES unite them is the sheer size of their respective scams and their belief that their size alone makes them immune from any accountability or responsibility to society.

This is perfectly in consonance with India’s prevailing cultural, administrative and legal ethos which postulates that a small crime is punishable but a big crime is exempt from the consequences of law. Big is beautiful. If you were to kill one person, chances are that you would get caught and punished. But if you kill fifty or sixty people in a communal riot or mob violence you won’t even be mentioned in an FIR – there is a long list of such carnages, Muzzafarnagar being the latest one in which a judicial commission, no less, has absolved everyone of responsibility and blamed instead a nebulous “intelligence failure”. If you rape one woman you’re dead meat, but if you rape a dozen as reportedly happened in the Jat violence near Murthal last month, you’ll probably get the ruling party ticket for the next Assembly elections – any number of  “mahabalis” in ALL parties testify to this.

If you tweet that Shiv Sainiks have no right to gridlock traffic just because Bal Thackeray has passed away you will be booked for sedition (as two young Pune girls were), but if you advise all Muslims to go to Pakistan if they wish to eat beef (as many current Union Ministers have done vociferously) you will be felicitated at public functions. 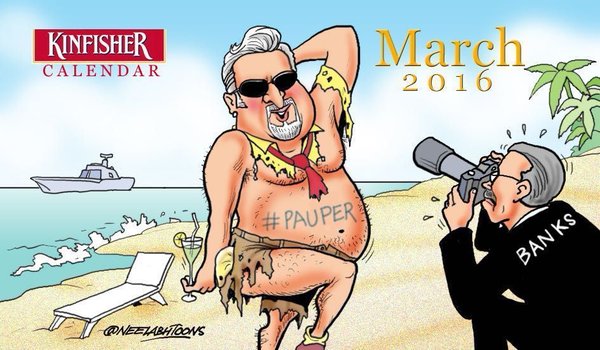 Cheating individually at a Medical entrance exam may be a big mistake but if you do so in an organised manner a-la-Vyapam along with a few thousand others in a multi- crore swindle you are likely to get your MBBS degree in due course, because no one will even investigate the scam which has the blessings of just about everyone in the system. The bigger the scam the more immune it is from any scrutiny.

If you burn a few leaves in Delhi to warm yourself in the biting cold you will be slapped with a fine of five thousand rupees. But if you devastate and rape 1000 acres of the Yamuna plains and waterfront you will have the President and the Prime Minister attending your jamboree.

Both Mr. Mallya and Sri Sri Ravi Shankar are exceptionally intelligent persons and have quickly grasped this essential truth of the Indian psyche and legal system. The former milked it for all it was worth for years, taking more than 7000 crores of money from banks (money that belonged to you and me). He paid dues to no one – not the government, banks, employees, oil companies – while those who should have been ensuring that he paid up either looked the other way or got drunk at his parties. After all, they reasoned, someone who has just robbed the country of more than a billion dollars is not a man to be trifled with. And so he strutted about the central hall of Parliament like an aging rooster, mingling effortlessly with others of his kind, and when things got too hot he just upped and left the country. We will see no more of Mr. Mallya, notwithstanding the mumblings of a Finance Minister, because you see, our legal fishing net is an inverted one – it catches the small fry but lets the big fish escape!

The case of Art of Living and Sri Sri Ravi Shankar is even more intriguing: Mallya at least made no bones about his being the sensual man, but the reverend Sri Sri claims to be a spiritual and holy man, a votary of nature, custodian of culture, a humble savant of the divine. It is now clear he is nothing of the sort – he is just another Mallya in sheep’s clothing, more intent on extracting crores from donors, in making an international splash and getting his name into the Guinness Book of Records. Why else would he insist on destroying a thousand acres of a river’s precious wetland that has the capacity to supply 1 million cubic meters of water every year to a parched Delhi? Why else would he bulldoze, flatten, defoliate and de-vegetate the floodplains of the Yamuna inspite of a public outcry? His avaricious ambition is bad enough; even worse is his blatant and insensitive defence that he is bringing international attention to the Yamuna and to the methane gases that it extrudes !

But he has got away with it, just as Vijay Mallya got away with it , and before him Lalit Modi. He even has the world’s fifth largest army helping him to destroy the river, and has demanded that the government give him another Rs. 53 lakhs to clear the muck that HE AND HIS DISCIPLES WILL GENERATE OVER THREE DAYS! 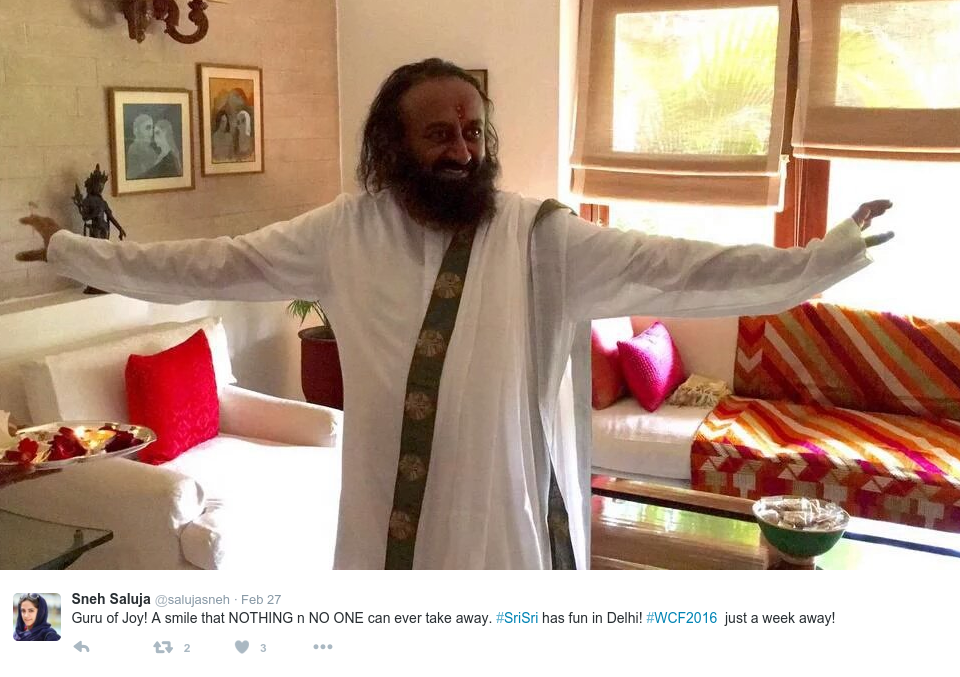 He got away because of the sheer size of his operation — 1000 acres, 35000 musicians, a 7 acre stage, 3.50 million participants. He got away because the entire system caved in. We are not surprised that all political parties have connived at this monstrous violation and obscenity, that the termite infested DDA, Central Pollution Control Board and MOEF silently watched this rape of a dead river (necromancy?). What has outraged most right thinking people, however, is the manner in which the NGT (National Green Tribunal) has endorsed and permitted this blatant wrongdoing. Instead of immediately issuing an injunction to stop all work when the matter was brought to its notice, it dithered over it and allowed the pillaging of nature to continue unabated. It maintained this cerebral paralysis even when its own expert committee reported that “irreversible” damage (quantified at Rs. 120 crores or US $ 20 million) had already been caused. The NGT noted that its own order of 15th January 2015 that no work of any kind is permitted on the Yamuna flood plains had been violated by Art Of Living. It found that no permission for the function had been accorded by either the MOEF or the Pollution Control Board, and that DDA had exceeded its authority in granting permission. Pretty conclusive, you would think ? More than enough to finally deny approval for the event?

Not at all. By a logic that surpasses all understanding the NGT has actually ALLOWED THE FUNCTION TO GO AHEAD. It has imposed a paltry Rs. 5 crore fine on Art Of Living which will never be paid and a Rs. 500.000 penalty which will have to be paid by the tax-payer. In any case it’s not the mandate of the NGT to garner revenues for the government: its job is to protect the environment and implement environmental laws – it has clearly failed to do so in this case. It has let down the citizens of Delhi and reaffirmed Sri Sri Ravi Shankar’s faith in his megalomania.

If the venerated Sri Sri and Vijay Mallya exemplify the art of living all one can say is:

“Death, where is thy sting?”