In an article titled THE DELHI IMBROGLIO- A REFERENDUM IS THE ONLY WAY OUT published on the Hill Post site on 25-5-2015 I had argued why Mr. Kejriwal should demand a referendum on the Delhi statehood issue instead of just agitating the question on the streets. On the 5th of July AAP has now formally raised this demand and has asked its Urban Development Department to work out a proposal for this.

There used to be a time when it was believed that politics was the last refuge of scoundrels: that has changed-today its their first refuge. On a similar note, it is becoming evident with each passing day that the first refuge of politicians is the law, or the legal process. (One cannot, of course, miss the delicious irony in the fact that a force which was meant to punish them has ended up being their strongest shield!). Of course, this applies equally to scoundrels too, and in any case its becoming increasingly difficult to tell the difference between the two.

Indian politicians are perfecting the art of hiding between the terminology or the processes of law. A legalism a day keeps the prosecutor away. And so a Shivraj Singh Chauhan avoids his own implication in the Vyapam scam by saying he cannot order a CBI investigation because it is for the High Court to do so. Smriti Irani deflects all criticism of her thrice – born affidavits by saying that she has not yet been summoned by a court (which has taken cognizance of the complaint against her); Sushma Swaraj suo-moto reversed the government’s policy on a wanted fugitive but can legitimately claim that she has not broken any law; Akhilesh Yadav refuses to register an FIR against a Minister accused of burning to death a journalist (in his dying confession, no less) and then wards off journalists by saying that he cannot be arrested because no FIR has been filed against him! A serious FIR against a Governor is quashed because the law gives him immunity. Lalit Modi continues to evade the law by claiming that he has not yet been declared an absconder by a court. 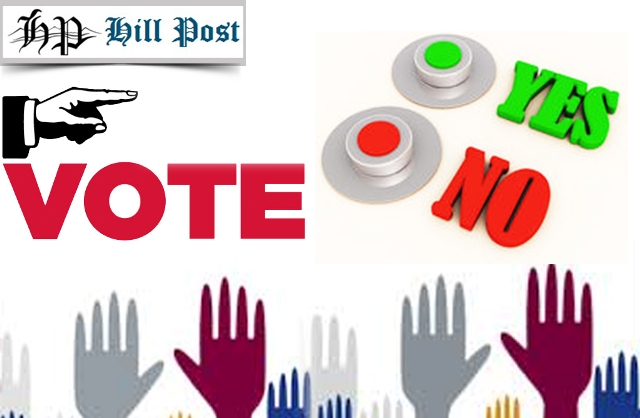 It therefore doesn’t surprise me at all that Kejriwal’s proposal for a referendum on the Delhi question has been met by a synchronised howl from both the BJP and the Congress condemning it as “illegal“, “unconstitutional” and “anti-national“. It is none of these, but these two parties realise that they cannot let Kejriwal run away with this bone in his mouth, and for a number of reasons: one, a referendum in Delhi will set a precedent for similar demands elsewhere; second, it will be a second nail in the BJP’s national coffin and a personal defeat for Mr. Modi; third, it will relegate the Congress to the Wazirabad garbage dump for the next twenty years; four, it will upset the loaded apple cart of Loot-yen’s Delhi where everybody has his or her nose in the feeding trough (the mixed metaphor may be excused in the interest of conveying the precise meaning!).

The referendum is a useful and legitimate tool of democracy, and the sooner these politicians realise this the better it will be for the country. It is a direct vote in which an entire electorate is asked to vote on a particular proposal, the vote usually being a precursor to a new law or policy. Unlike voting in Parliaments and legislatures by elected representatives, a referendum is an expression of Direct Democracy: it complements the system of Representative Democracy. There are certain seminal and foundational issues in any country which are either extremely divisive, or such that they cannot be left to the decision of a government which is loath to give up its own powers (as in Delhi), or to elected representatives who are constrained by their party lines or own self-interest. Some questions can only be decided by popular sovereignty and not by politicians.

The term “referendum” is believed to have originated in the Gaubunden canton of Switzerland in the 16th century. It is a process which has been used liberally by democracies: more than 500 referendums have been held world wide since the end of the 18 th century in countries such as the USA, Australia, Switzerland, Bolivia, Kenya, Norway, Hong Kong, Serbia, South Africa, Canada, Venezuela, UK, Ireland, Poland to name a few. The subjects they addressed have been equally diverse: congestion tax, devolution of powers, electoral reforms, prohibition, accession to EU, redrawing of boundaries of political units, constitutional changes and so on. The most recent ones were the referendums on the independence of Scotland and the financial crisis in Greece. Referendums, by correctly gauging the popular will, always strengthen democracy and governance and not weaken it as Mr. Maken and Upadhyay mistakenly believe. It also acts a safety valve in volatile situations. So the path Kejriwal wants to tread on is a well travelled one though we in India may be stepping on it for the first time.

Delhi itself is sharply divided on the issue of statehood, and this fault line runs across class lines, unfortunately. Some people have benefitted from the present unique hybrid status of Delhi which is under the Center’s thumb – the politicians, bureaucrats, all residents of South and Central Delhi who have historically been consuming a disproportionate proportion of all assets : power, water, funding, police presence, infrastructure and superstructure; traders and businessmen with contacts in the central government agencies and organisations such as DDA, Municipal Corporations, CPWD and so on. On the other side of the divide are the residents of a lesser Delhi – the low income groups, residents of unauthorised colonies, migrant labour, petty shop-keepers who rarely feature in the planning processes and priorities of the powers that be. This latter group outnumbers the former and constitutes the bulk of Kejriwal’s support base. If a fair referendum were to be held, the result would be a foregone conclusion in favour of statehood. This is why the mainstream parties are resisting it and will deploy all tactics to ensure that it never happens. What they wilfully ignore for pelf and power is the fact that Delhi’s present administrative structure is antiquated and cannot meet the challenges of its cancerous growth or the rising expectations of its citizens. The arbitrary division of powers between an elected Chief Minister and a domesticated Lieutenant Governor, between officers who report to the Center and those who report to the state government ensures that there is no accountability or sense of responsibility. The Center deliberately choking Delhi of its fair share of funds in favour of discretionary grants is an insult to the citizens. The police have run riot because they can play both sides against the middle and have consequently become a law unto themselves. It is no wonder then that Delhi is the worst metropolis in the world.

Things have to change and a referendum would decide it one way or the other: this stasis in governance cannot be allowed to continue. Kejriwal’s bold initiative is a step in the right direction and deserves to be supported by all who have the genuine interest of Delhi at heart. But I foresee a bitter struggle for him where even the courts will be ranged against him. This is a battle he cannot win in Parliament or in a judicial chamber – but he will win it on the streets of Delhi. It will be a Pyrrhic victory, and India will be the better for it.