India is indeed a country mired with controversies. If none exists in an issue, we are quick to formulate one – after all how can there be an issue without a controversy in India. Controversies seem to be part of the staple diet for most Indians today. The recent case of celebrating June 21 as an International Yoga Day is no different. The fact that the suggestion put forward by Prime Minister Narendra Modi in the United Nation during his visit to the United States of America was accepted, appreciated and agreed for implementation by nearly the whole world (177 countries at the last count) is of no consequence. 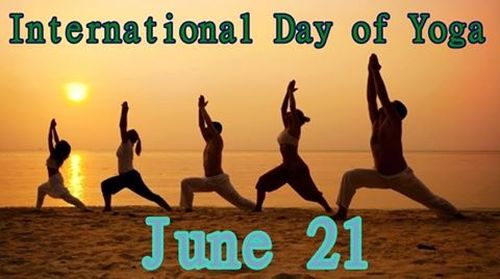 Our nation thrives on controversies. For the media it is prime time eyeballs or greater circulation of printed matter resulting in huge financial payoffs. Politicians build up their careers by exploiting controversies – be they genuine or just created for the sake of vested interests. Communities tend to rediscover their fading identities by riding controversies even if it means alienating themselves from the nation’s mainstream.

The recent controversy surrounding the Yoga Day celebrations on 21 June in India is no exception. The government’s recommendation that the day be celebrated in all schools across the nation has invited the wrath of many Muslim politicians and clerics. The main issue being cited is the practice of Surya Namaskar that is one of the hundreds of asanas that are practiced in Yoga. The explanation being given by these over righteous individuals is that Surya Namaskar is a Hindu way of worship and that a Muslim can only bend in front of the Almighty (Allah) and not in front of anyone or anything else – in this case the sun.

This is as silly as it can get. Firstly the sun is universal and not a Hindu entity. Secondly, all of us including Muslims bend from the waist for various reasons throughout the day for various reasons for performing different chores and acts in our daily life. This includes while exercising or playing any sport. Yoga too is a form of exercise and Surya Namaskar is one among the many exercises that are performed while doing Yoga. Further, if any particular exercise is not to ones liking, for whatever reasons, one can always refrain from doing so. There is no binding that each and every move that is part of the Yoga routine has to be done by each individual. In fact no one can really do all yogic routines since there are so many. But then logic, rationality and clear headed thinking will not give birth to a controversy. Therefore such attributes must be consigned to the dustbin if one wants to ride a controversy and fan the fire for vested personal or political interests.

These narrow minded souls, who have raised their dissenting voices against the practice of Yoga in schools and elsewhere, do not appear to have the courage to state the real reason for which they are opposed to Yoga. In reality the only reason they are opposed to Yoga is because Yoga’s origins are found in the Vedas and Upanishads and the credit for development of Yoga is given to Hinduism? They want their people to believe that the spread of Yoga is akin to spread of Hinduism. We all know what stupid is but can we answer the question “How stupid can stupid be?” Normally this question has no answer. But the stand taken by some Muslim political leaders and clerics on the issue of Yoga comes very close to being a worthy answer to this question.

Are Yoga and Hinduism synonymous? Is Yoga religious in nature? Is yoga only for Hindus? Does the practice of Yoga spread Hinduism? To any sane mind there is only one answer to all these questions and that is a big ‘No’. May be a little of history and back ground check on fundamentals of Yoga may help and clarify the same. Yoga is derived from the Sanskrit word ‘Yuj’ that means ‘to join’ and the Hindi the word ‘Yog’ that means ‘total’. These two words sum up the meaning and aim of Yoga which is to ‘join the personal soul to the total universe’. Yoga is essentially a lifestyle that touches all levels of human life that includes various spheres like physical, mental, emotional, intellectual, social, psychological and spiritual.

This list is essentially what a human life is really all about. This gift of life from the almighty, irrespective of the religion that one is born into or practices, needs care and maintenance for efficient functioning since human body is perhaps the most complicated machine to have ever been made in this universe. Yoga is the medium that helps in doing just that in a very comprehensive and efficient manner without using any other element or external agent. Yoga is essentially a combination of mind control exercises aided by controlled breathing that help to energise the body so that it can carry out its daily functions to meet all the physical and other demands raised on it. As they say ‘One can never stay healthy with an unhealthy mind’ – yoga simply puts that into practice by concentrating both on the body and the mind at the same time.

Does religion figure anywhere in the above explanation? It obviously does not unless one wants to distort the issue. The only connection of Yoga to religion is the fact that it was developed by Hindu sages as per records available in Upanishads and Vedas. Some people have objected to the use of the sounds of ‘Om’ in some of the yogic exercises since in their opinion such sounds are construed to be associated with Hindu religion. This is a very popular misconception. On the contrary OM is a universal syllable that does not refer to any God or any religion. This syllable has been researched extensively to analyze the sound waves involved in its chanting.

It has been found that OM (or AUM) when chanted sequentially activates the stomach, spinal cord, throat, nasal and brain regions. This helps the energy to move all the way up from the abdomen to the brain and in the process it energises the spinal cord and brain. Further the experiments, on some scientists themselves, showed that Om mantra improves concentration and reduces mental stress thereby giving peace and steadiness to our mind. If done regularly and properly it helps to expel unnecessary worldly thoughts from our mind.

This is a major subject in itself and all research is based on scientific and technical parameters involving sound waves and their analysis. Most sceptics who view OM as a religious chant will be happy to know that all this research has been carried out by developed western nations who are not linked to Hinduism. In any case one is at liberty to omit the OM sound and replace it with some other suitable sound and still be able to perform Yoga.

Frankly most Muslims in India already have a much deeper connect with Hinduism that they unfortunately and deliberately tend to ignore. It is no secret that the forefathers of present day Indian Muslims were born Hindus before most of them were converted to the Islam religion forcibly by the Mughals and others starting in the tenth century AD. Therefore it is indeed very surprising and unfathomable as to why they have shown such an aversion to the spread of Yoga which is nothing but a form of exercise that aims to develop a healthy mind in a healthy body.

In today’s context if any community needs to achieve this goal of a healthy mind in a healthy body, it is the Muslim community considering what is happening in various parts of the world in the name of Allah where thousands are being killed mercilessly, hundreds of women are being raped in the name of the almighty and children are being robbed of their childhood by drafting them in the rank of jihadists while still in their teens. This may sound harsh but is true nonetheless.

Yoga today is being practiced across the world including in some seriously Muslim countries. The original Yoga forms have also undergone changes and evolved from region to region. Chants and sounds have been modified where required to suit local needs. World over it is perceived only as a form of exercise, without any religious connection, that helps to condition the mind and the body at the same time. Sometime back there was a small protest in the State of California in USA when Yoga was introduced in schools. A group of parents who formed an alliance with an organisation in favour of the introduction had this to say: “From our work with the yoga community over the past 13 years, we have interacted with people of many faiths, along with agnostics and atheists, as they engage in the practice and teaching of yoga. We believe that yoga can be taught in a completely secular manner and that children and adults alike can benefit from this transformative practice”.

In present times where the lives of children and adults are ruled by internet and mobiles, the conditioning of the body and mind is even more essential than ever before. At the cost of antagonising many, one can venture to state that one may forget to pray (in whatever manner one does) but one should not forget to exercise since a healthy body with a healthy mind will invariably help to develop better human beings. A good human being will invariably think and act in a humane manner. That should please the Almighty to no end – whichever Almighty it may be. Finally it may be worthwhile to recall how Alan Fingers, a yoga enthusiast, summed up all there is to say about yoga when he stated ‘Yoga adds years to your life and life to your years’.