That which has been so yummy is now leaving a bitter taste. One wonders, how the toxicities of the maggi have been precipitating inside us. There are millions who habitually eat nothing but ‘2-minute noodles’. Again, for our starstruck moms such items always come easy.  They love to whip up the noodles for their kids when they rush back to home from schools. Papas unfailingly bring home bloated Uncle Chips and the like.

Alas, the superficial flavor of this cheery pouches have literally numbed our alertness that it took over three decades to realize its toxic hallmark. The poisonous lead, which is one of the ingredients of maggi, has already eaten into the very muscles, nerves and marrow of our bodily system. To what extent it has made us vulnerable to a varied fatal illnesses is yet to be established. 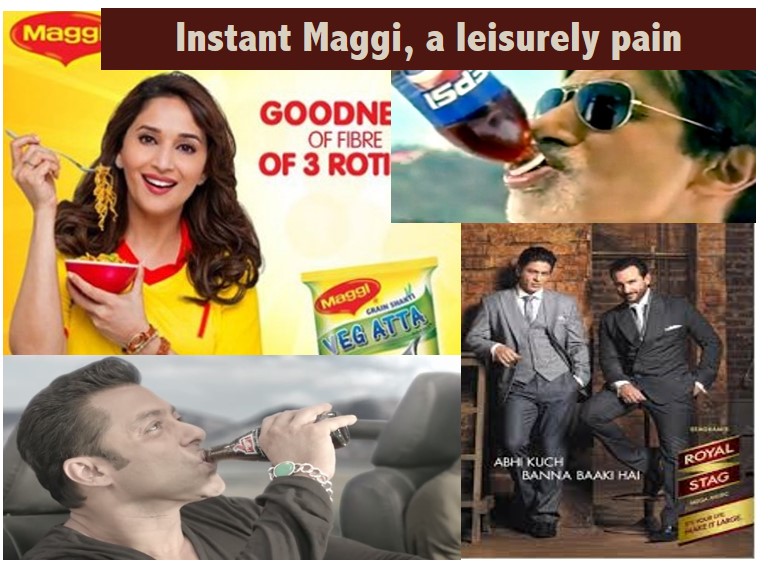 Thank God, the devious companies churning out such food products can easily hire a bevy of celebrities.  Such celebrities have no hesitation in endorsing any damn items under the sun in any manners and styles. And, we bone-headed get easily captivated by them that we hardly notice their insincerity and callousness.

Well, it’s their greed for money that makes them stoop so low to sell their soul. Apart from ordinary Bollywood stars, Amitabh Bachhchan is one of such respected heartthrobs in INDIA who, under the glitter of glamour, dignity and fame, still roars for a stream of petty items. Is it not less expected from a star of his stature whom people respect so immensely? Most of his ardent fans feel uncomfortably confused when he patters for less-better stuff.

There is no a chill-out tale to tell with respect to the beverages. Just check out, if Sachin Tendulkar’s Coca-Cola has not washed down the very strength of the digestive bile and enzymes of innumerable people. It is often heard that a pang of chronic dyspepsia and abdominal ulcer due to regular Coke/Pepsi drinking has left a lot many consumers in the hot soup. Those aggrieved souls now just live on bland and boiled food.

Again, Shahrukh Khan’s Royal Stag was quite regaling. This must have spirited up many for more pegs. Didn’t that help them walk down the graveyard prematurely? Our localities, near villages, towns and cities are full of pitiful instances where the addict sinking with a number of health complications, and thereafter he pays the ultimate price for his sin.   But sadly, no company or Bollywood stars ever boom out on our TV channels to inform and alert us that so many families have been shattered due to alcoholic fathers.

“Besides endorsing the adulterated food product, Bollywood celebrities have been putting more dangerous poisons of vulgarities and absurdities into our society. We can’t view a whole movie together these days with our family members. Are they not to be blamed for a rapid degeneration of society, family values, marital relationship and culture? It’s is a serious development we are just ignoring. How could they be dignified figures whose lives are weighed down by a load of venality, conceit and sleazes?” — retorts Dr. Manoj Kr. Mehta, a professor of neuro-sergeant of Maulana Azad Medical College, New Delhi.

Here, what could be more ludicrous than the fact that ones who show us a road to hell are even worshipped like a prophet from heaven! Masses are so much under the spell of Bollywood stars in INDIA that they do not hold back to scream that certain stars should be honored with the most highest awards — not just Padma Bhushan and Padma Vibhushan but Bharat Ratna.

Shillong-based writer and researcher, Salil Gewali is best known for the research-based work 'Great Minds On India', which has earned worldwide appreciation. Translated into 12 languages, his book has been prefaced by Dr. Kamlesh Lulla, a Houston (USA) based NASA chief scientist.