Hot on the tail of militants who had killed 18 Indian army men on June 4, early today morning the armed forces conducted a daring hot pursuit attack to waylay two separate groups of insurgents on the Indo-Myanmar border.

Where some accounts stated that it was a cross border operation but the official communiqué of Indian army released by Ministry of Defence spokesman Sitanshu Kar at Delhi a little while ago has stated:

“Early this morning, the Indian Army engaged two separate groups of insurgents along the India-Myanmar border at two locations, along Nagaland and Manipur borders. Significant casualties have been inflicted on them.”

The statement revealed that “in the course of last few days credible and specific intelligence was received about further attacks that were being planned within our territory. These attacks were to be carried out by some of the groups involved in the earlier attacks on our security personnel and their allies

In view of the imminent threat, an immediate response was necessary. Based on intelligence, we conducted operations to counter these planned assaults.

To contain any fallout the communiqué added that the Indian government was in communication with the Myanmar authorities on this matter. “There is a history of close cooperation between the two militaries. We look forward to working with them to combat such terrorism.”

Sending out a warning the army note said, “While ensuring peace and tranquility along the border and in the Border States, any threat to our security, safety and national integrity will meet a firm response.” 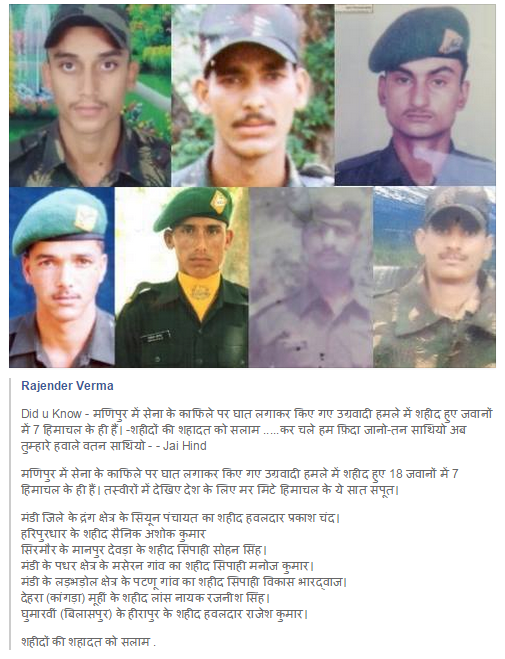 Seven of the 18 army men who died in the June 4 ambush in Manipur’s Chandel district were from Himachal Pradesh.

Caught off guard, the convoy of 6 Dogra Regiment was on the verge of proceeding on leave when the soldiers became the victims of one of the deadliest strikes by militants on the Indian forces in recent times.