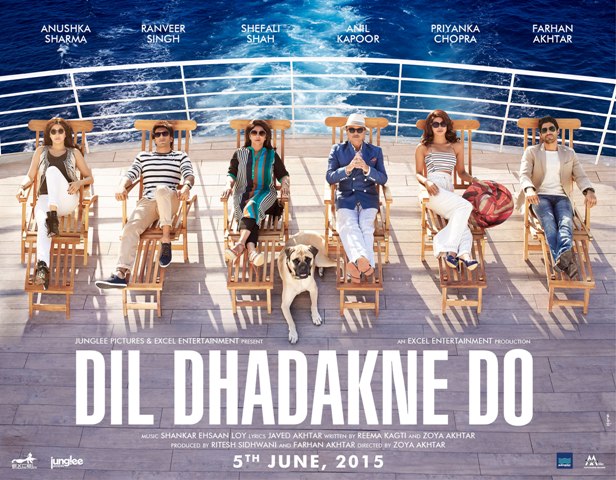 DDD is a lazy movie that invites you to come on board for a relaxing cruise. After ZNMD, we had high hopes from Zoya Akhtar, as she seems to have a knack for displaying her characters without over explaining them. That is exactly what she does not do in DDD. She decides to let us down by preaching and telling, with the help of a dog who sounds like Amir Khan.

DDD is a travel chronicle of the rich and famous in Delhi. But seriously, how many rich Delhites have the heart to sponsor a cruise for their close friends? The irony of the matter is that despite loads of money and impressive family backgrounds, the characters think and behave like the characters from Ekta Kapoor’s serials. The Mehra’s namely Anil Kapoor and the beautiful Shefali Shah are calling together their close family and friends to celebrate their 30th wedding anniversary. All sounds well till then. 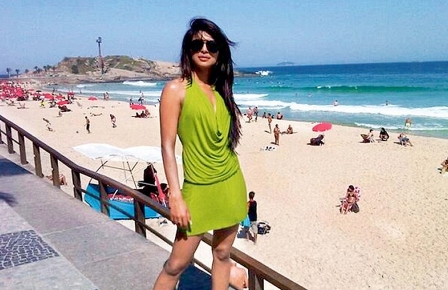 Once the ship is set a sail, the cracks in the families start to appear. Their daughter Priyanka Chopra is having trouble with her prim and proper husband played by Rahul Bose. We wonder if Zoya could have found a better actor than Rahul to play this role. He looks totally out of place and aging at rocket speed. Priyanka and his pairing is so very distasteful. Anil Kapoor on the other hand seems to be having a gala time and is totally comfortable with his grey haired version. He does what he does best, plays himself.

We suggest you go watch the movie for Ranveer Singh, who looks his most handsome and well dressed in this movie. His new avatar is sure to get him loads of female fans. He has acted remarkably well and played his part to perfection. Had it not been for him the movie would have been a complete dud. His bursts of humour, the final fall out with his parents are some of the most memorable scenes in the movie. It is obvious that behind the super charged persona and the happy-go-lucky attitude, is a very serious actor who works very hard to achieve perfection in whatever he does. 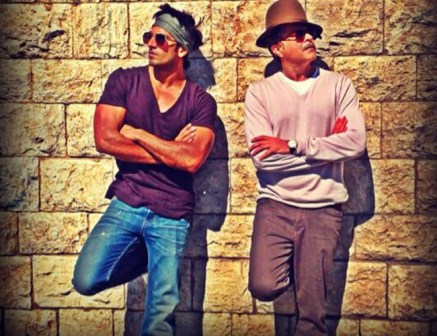 The movie lacks in moments of brilliance where the brilliant younger Akhtar should have chosen to show, instead she chose to tell. Anushka Sharma and Ranveer Singh share a crackling chemistry on screen, but it is the lovable Ranveer Singh, that the audience ends up cheering for. Priyanka Chopra has a very significant role as the successful daughter of Anil Kapoor. With her sensitive performance she is able to bring to the foray the sensitive subject of incompatibility in marriage, which very few movies have touched upon.

We can sadly affirm that this is Zoya’s weakest movie till date. That’s because she has tired to wrap up too many stories at once and ended up with not doing justice to any. The performances of the supporting cast is what keeps the movie going and, what actually makes you sit through it is the cinematography of Carlos Catalan’s. He successfully captures the family drama on board and the breathtaking sites all around.

The movie on the whole comes across as an attempt to do something classy, but it could have been so much more than a  melodrama of family affairs. The story telling is the weakest link of this movie. Reema Kagti and Zoya Akhtar need to bang their heads and do a serious evaluation on where they lacked in creativity, in this one. The music of the movie is pretty decent and the title track sung by PC and Farhan Akhtar is topping all charts. A special mention needs to be made of Shefali Shah, whom we all have missed on the silver screen. She delivers a stellar performance as the troubled housewife who still holds her own. Farhan Akhtar’s small cameo leaves a strong and lasting impression, and he looks totally comfortable in his sister’s pet project. 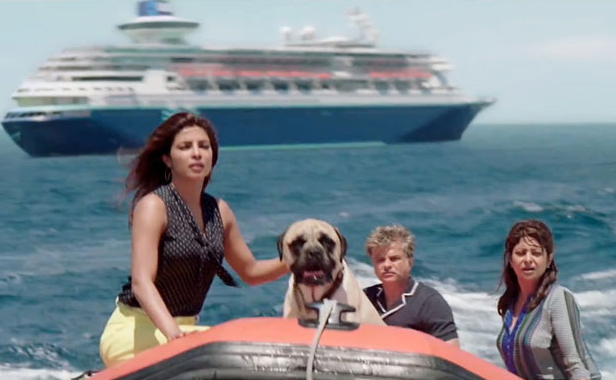 On the whole if you are a die-hard Ranveer Singh fan and a Anil Kapoor loyalists then you need to give the movie one shot atleast. We know that you might not be interested in the problems of the rich and famous. But it is a saga of human emotions and their struggle to keep it normal, at the end of the day.

Go watch the movie for the immensely talented Ranveer Singh, the beautiful Shefali Shah and our globally recognized pool of talent Priyanka Chopra.