Kullu: Hotel owners in Kullu valley are excited by business prospects improving with introduction of a 70 seater flight to Bhunter as they expect an increase in arrival of high end tourists.

Anup Thakur, president Hotel Association Kullu-Manali said, “Air India by introducing this air route will definitely boost tourism as most high-end would prefer to arrive by air for it saves on journey time and also increases staying duration.”

State carrier Air India launched a 70 seater regular flight Delhi-Kulu-Delhi on Wednesday (17.6.2015) that would ferry a maximum of 65 passengers from Delhi to Kullu Bhunter airport, and 55 from Bhunter to Delhi. 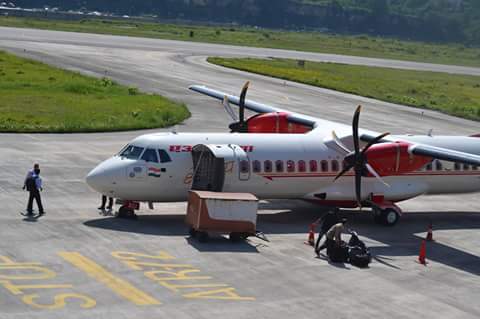 So far only 48 seater aircraft carrying only 32 passengers from Delhi to Kullu and 22 from Kullu to Delhi was operating the flight because of the short run way for landing  of aircraft at Bhunter airport.

Dinesh Bhardwaj, Bhunter airport in charge when contacted by Hill Post said, “the inaugural incoming flight on Wednesday was scheduled for 8:00 am, it landed here at 9:20 am and returned to Delhi with 30 passengers at 9:50 a.m.”

Tourism in Kullu – Manali valley over the past year has been hit due to heavy snowfall disrupting power lines, a taxi operators strike protesting against an National Green Tribunal order over limiting access to Rohtang Pass and by there being no regular flights to Kullu airport for a long time.