Dehra Dun : It has finally percolated down to the people who matter that statehood for this tiny hill state has brought little benefit to the masses and over the past 15 years that Uttarakhand came into being, the various governments have done precious little to uplift the lot of the people, specially those in the far flung interiors.

While corruption has multiplied manifold, and those with clout and in proximity to the corridors of power are making the most of it, the aam aadmi has found himself in a rut, with the state of affairs having gone only from bad to worse, despite the tall claims of development being made by the official machinery from their their air conditioned chambers.

Villages that were humming with activity before statehood was given to the region are slowly but surely becoming deserted as populations have started migrating to the plains in search of livelihood and greener pastures. The once lush green fields are today barren with weeds having taken over and houses are slowly becoming ruins as no one lives in them any more. 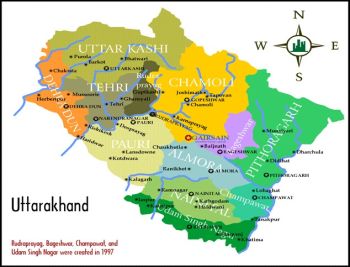 Various organizations of the state that met here recently drew the conclusion that the masses had a lot of hopes and expectations when they struggled for statehood that, that once Uttarakhand becomes a reality, they will have their government which will take stock of the problems being faced by the people and resolve them with policies and programmes aimed and formed for the betterment of the people.

Tragically, nothing of the sort has happened and the governments that have come and gone in the last 15 years have done precious little as far as the aam aadmi is concerned. On the contrary the state’s rich natural sources are being systematically looted and plundered by outsiders who have taken over the corridors of power, while the locals can do nothing but remain silent spectators.

With villages slowly becoming deserted, members of various organizations present at the conference decided that they will launch an agitation to save the villages from the mass migration that is taking place. They will take out a rally from Tuini to Dharchula in September with the mission ‘save our villages’ and raise social, economic and political issues to educate the masses.

To press home that policies were being in detrimental interest of the people, it was pointed out that permission was given for setting up stone crushers in Maletha. The dust and particles from the crushers will make the ferile fileds barren and rather than encouraging agriculture in the village which has its own irrigation canal, which is now a legend, the government gave permission for stone crushers.

They said that everyone who is someone in the state government, right from the chief minister downwards talks of the mass migration that is taking place from the villages, but no concrete measures have been done, no policies or programmes formulated to stop the migration from the villages or even provide the villages with basic necessities like education and health facilities to prevent them from leaving their villages.