In January last year Mr Kejriwal admitted that he was an anarchist in the aftermath of the infamous raid carried out by his colleague Mr Bharti in the Khirki village area. The recent events in the national capital where the AAP government is at loggerheads with the Lt. Governor of Delhi seem to justify his admission. It is indeed very surprising that these political leaders think they are a law unto themselves just because they have been given a mandate to form a government by the voters. Why do they forget that the mandate is for ensuring an effective and clean government that works for the best interests of the state and its people, which in this case is Delhi.

Is Mr Kejriwal working for the state of Delhi and its people by adopting a confrontational approach with the Lt Governor and the central government? One will indeed have to be naive to give an affirmative answer to this question. The only obvious reason for such an approach is to build his personal image as a crusader that may help him in his future career as a politician since Delhi or its people are not gaining anything out of this state of affairs. The senior administration in the state appears to be in shambles and demoralised with no idea of how or when the issues involved will be resolved. The lower levels of administration will obviously be without the necessary guidance and control that is needed for an effective administration. This is surely not what Delhi needs.

Mr Kejriwal knew exactly how the state of Delhi functions when he took over the governance of Delhi. If that be true, then his first moral duty was to provide an effective and fair administration, perceived or genuine constraints or concerns notwithstanding. Once he had made sure of his prime responsibility, he was at liberty to fight for any additional rights that his government felt must be granted to the state of Delhi. The Indian constitution provides room for such demands and also the procedures that need to be adopted for the same. Bull dozing or following the ‘anarchist’ philosophy to seek fulfilment of his government’s demands is not what the people of Delhi voted for.

A peoples’ mandate in any democracy does not imply that the elected representatives can go berserk or use unconstitutional methods to seek acceptance of their demands. It does not give the leaders a blank cheque to do what they feel or how they feel by terming it as the will of the people. Such misplaced thinking on part of the elected leaders, particularly when most of them can be classified as mavericks, can be very detrimental to the health of the state that they are governing. Mavericks are known for their penchant to pursue rebellious, even potentially disruptive, policies or ideas. Delhi, the capital of our nation, has no room for such mavericks in governance and that has to be understood by the AAP leadership in general and Mr Kejriwal in particular. 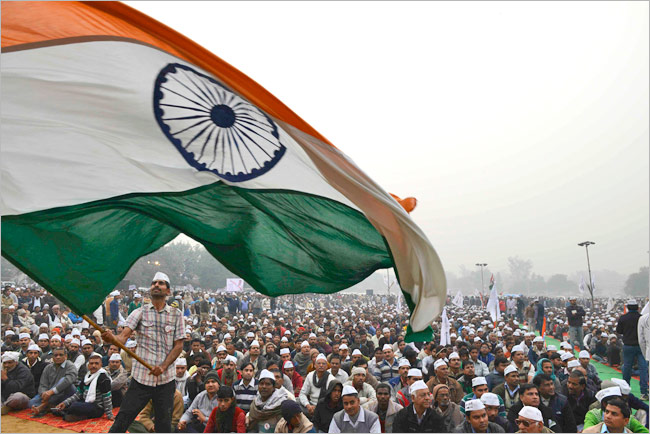 If one reviews the AAP government’s second tenure which is nearly five months old now, all one can count on the plus side are the initial impromptu reduction of power tariffs and the limited free supply of water to part of the population of the state of Delhi. After that the AAP government has been in the news for all the wrong reasons starting from confrontation with the three municipal corporations, a run in with various senior bureaucrats that has culminated in an avoidable battle with the Lt Governor and the centre. Surely this is not good governance in any book or by any standards. The loose language that is being used to desecrate the high office of the Lt Governor by various AAP leaders is a matter of serious concern since it shows their lack of respect for constitutional authority on one hand and lack of character as individuals on the other.

The public censure, right or wrong, of senior bureaucrats too does not bode well for the administration of the state nor does it show the new leaders in good light. Above all when politicians fight with bureaucrats publically, it does send very wrong signals across the state. This linen cannot be washed in public since as far as public is concerned the administration starts with the elected leaders at the top and goes down all the way to the lowest rung of the government employee in the administration. The minister cannot be seen in isolation of the administrative set up that he heads and controls. Unfortunately most AAP leaders have no clue of such finer matters that go a long way in ensuring effective and clean governance. Surely a more balanced and pragmatic approach could have been followed by Mr Kejriwal who himself had been a bureaucrat for over twenty years. As things stand, only the very pliable bureaucrats will opt for working under Mr Kejriwal. That one thought was exactly opposite of what Mr Kejriwal stands for.

The state of Delhi today is possibly worse off on most counts than it was a year or two ago. Power situation is on the brink of collapse since the distribution companies are not being treated as partners in Delhi’s march towards uninterrupted power for all 24 hours. Traffic is as bad as ever with Delhi traffic police showing no signs of working towards any improvement. Public transport, other than metro, has not received any fresh inputs so that it could serve the common man better. Infrastructure in terms of roads, drainage, sewage lines among others is as bad as it always was and the coming monsoons will once again see Delhi plagued with water logging without any doubt.

There is no visible change in the overall security set up of the city. Encroachment of roads and pavements continues across the state of Delhi since there is no political will to control the same. Garbage and filth continues to be seen everywhere as ever before. The list is endless and if Mr Kejriwal and his government want to make a difference to the life of the common man in Delhi, who gave them a historic mandate, then they have their task cut out. However the important question that needs to be answered is whether the AAP government under Mr Kejriwal up to the task? They failed in their first tenure of 49 days when they tucked their tails between their legs and ran away. Their second innings too does not seem to have inspired any confidence so far.

No political leader is bigger than the state or the government that he heads. Mr Kejriwal will do well to understand and keep this in mind in whatever he or his government do. As on date it looks as if Mr Kejriwal is more focussed on building his personal image of a crusader that hopefully will make him a force to reckon with at the national level in the near future. The state of Delhi is just a stepping stone as far as he is concerned. This Mr Kejriwal is treason in any book and breach of trust of the mandate that has been given to you. Mr Kejriwal will do well to remember what Albert Einstein said long ago “Try not to become a man of success, but rather try to become a man of value”.

So Mr Kejriwal, maybe it is time for you to do some rethinking with a clear focus on how to bring some solid value to Delhi while you are its Chief Minister. If that happens, success will come to your door step without your striving for it at the cost of Delhi. A few years down the line, will the common man on the streets of Delhi say that they were fortunate to get the AAP government or will they rue the day they voted you in power? Choice, Mr Kejriwal, is entirely yours.