Kullu: To support the state in upgrading its road infrastructure, union government led by Prime Minister Narendra Modi would be spending about Rs 10,000/- crore for constructing 4-Lane highways, repairing damaged roads, union minister JP Nadda stated while addressing public rallies in Mandi and Kullu, recently. He said that the union government was determined to develop Himachal Pradesh as a hub for education, Information Technology, tourism and health.

Before holding a public meet here on Saturday (25.4.2015), the minister was given warmly received by BJP leaders. Taking the state government to task for the bad road conditions, the minister said the Modi government has decided first to improve the state’s road network.

“Eight new national highways have been approved for Himachal Pradesh and a budget support of Rs 48 crores has been given to the state government for carrying out road repairs. As the roads have not improved, the state government appears to be reluctant to spend the money on road repairs,” said Nadda as he pointed out the bad road condition of highway to Kullu-Manali. 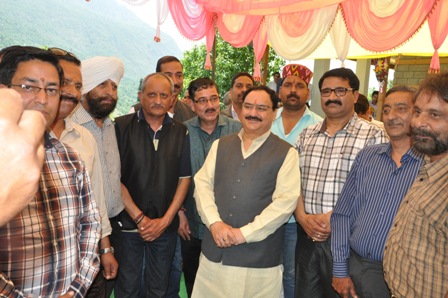 Mentioning the efforts being made to improve health infrastructure, the minister disclosed that 4 trauma centers with an investment of Rs 50 crore each would be set up at Mandi, Hamirpur, Tanda and Rampur.

Nadda said that Rs 5 crore each had been sanctioned for a mother child healthcare centre at Sundernagar and at Mandi, Rs 6.50 crore for two community health centres and another Rs 7.5 crore for six primary health centres to be set up at Mandi. The minister also announced a Rs 50 lakh for a Kargil Park to be laid in memory of the Kargil martyrs.

Speaking about the upcoming Medical College at Mandi, the union minister said that the central government was ready to support the state government is running the newly constructed ESIC medical college at Nerchowk. Already Rs 700 crores have been spent in constructing relevant infrastructure for the new medical college, said Nadda.

About Kullu he said that vast untapped opportunities in tourism lay in the valley and one of them was health tourism.

About the union government push for financial inclusion, the minister lauded the efforts of the Jan Dhan campaign. “Launched by Prime Minister Narendra Modi the scheme had already opened up 14.5 crore new accounts and the previous congress government efforts to do so even with former Prime Minister Indira Gandhi nationalizing banks in 1971 had merely opened up 3.25 crore bank accounts,” said Nadda. “The BJP government is deeply concerned about the upliftment of poorer sections of society.”

Expressing his concern about the loss to life and property in the massive Nepal earthquake, the health minister disclosed that a team of 34 doctors with paramedical staff, and over 15 metric ton of medicine had been sent to assist in dealing with the emergency situation in the neighbouring country.