Kullu : Yet again, for the 4th time in succession, the Kullu Zila Parishad was conferred a National Award for its contribution towards empowerment of Panchayati Raj system at National Panchayati Raj Day celebration held in Delhi recently. 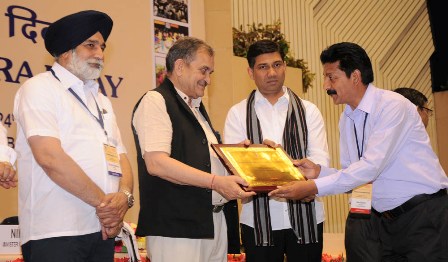 The award was conferred under the Panchayat Empowerment Accountability Incentive Scheme (PEAIS). On behalf of Kullu Zila Parishad, Chairman Harichand Sharma received the award at a function presided over by union Panchayati Raj and Rural Development Minister Virender Chaudhary that was held at Vigyan Bhawan. Besides a citation, the award carried a Rs 50 lakh cash prize.

We have been getting this award for the last three years, said Harichand Sharma, and the total prize money collected has touched Rs 1.15 crore. Attributing the achievement to all members of the zila parishad working in a cooperative manner, the chairman said that the state government too had appreciated our efforts by handing the state award to our rooted organization on Independence Day in 2013.

The Parishad makes efforts to empower all Panchayati Raj institutions in the district said Sharma by making people aware about various issues,  such as importance of planting trees, conserving the environment,  sanitation campaign including promoting an open defecation free society by encouraging construction of toilets at home.

“Our focus is mainly on developing rural areas” said Sharma.