Shimla: Seeing a surge in expansion of network subscriber base in Himachal Pradesh circle, Aircel, a pan India mobile phone service provider, is out to strengthen its telephony infrastructure by rolling out new 2G sites. 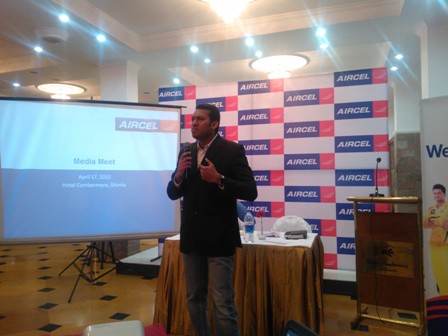 At a short presentation S Premkumar, business head Aircel HP said, “with an investment of Rs 12 crore within a month we will be adding 75 new 2G sites to provide seamless voice and data usage experience to customers in Himachal Pradesh.

He claimed that for the year 2014, against an industry average of 10.5% Aircel’s subscriber base in Himachal had grown by 20.7%. “In a little more than a years’ timeframe, we have added more than 2 lakh subscriber,” he said.

“In the states hilly topography, the population is scattered and ensuring seamless coverage warrants a multitude of BTS/towers to be present all over the state. Our investment in the new sites will significantly address this challenge.

With the addition of 75new sites across the length and breadth of Himachal Pradesh, we’re confident that we will build a robust network that will immensely help us serve our customers better,” said Premkumar.

When questioned about the company’s stand on the raging controversy over net neutrality, Aricel executives chose not to comment. “We are not authorized to speak on the subject,” said one senior executive.