Dharamshala: President Pranab Mukherjee, who was scheduled to be the chief guest for the second convocation held at Indian Institute of Technology, Mandi was unable to make it for the function but found time to participate in the puja session at the Baglamukhi Temple in Kangra. 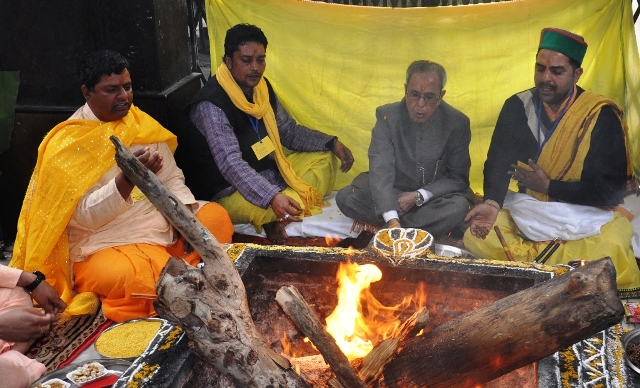 Government sources maintained that the president was unable to land at Mandi because of inclement weather in the morning hours, instead the helicopter landed at SSB Sapri helipad, close to Jwalamukhi temple town. From here, Sudhir Sharma, the urban development minister escorted the President by road transport to Bagalmukhi temple.

Not as famous as Vaishno Devi, Jawalamukhi, Brijeshwari, Chintpurni or Naina Devi temples but respected for empowering the seeker to fight and win disputes and overcome bad times, the lesser know shakti peet Baglamukhi temple is where the rich, powerful and the common man  turn to in a hour of need.

Set in a verdant forest, in the quaint village of Bankhandi, in Kangra district of Himachal Pradesh, folklore would have us believe that the temple has been there since the days of Kuru battles as described the epic Mahabharata.

In Hindu mythology, Mata Baglamukhi, popularly known as Pitambara, is regarded as one of the ten goddesses of Mahavidya (Wisdom. The goddess is considered to be a representative of Shakti (power) against cruelty and a manifestation of strength & courage. Believers also claim that the goddess demolishes any delusions or misconceptions a devotee may be harboring or facing in his or her life.

A Devi with three eyes, Mata Baglamukhi holds an enemy’s tongue in her right hand with left one is seen spiking him. The goddess is beautifully clad in yellow clothes with gems and has a crescent moon as her diadem. The sculpture of the Hindu deity can be seen bearing champaka blossoms. Seated to the right side of the divine deity is Maharudra, who dissolves the universe.