With snowfall through the night, Auli was covered in a blanket of snow when the competitors started out early morning. All vehicles had to use snow chains on the tyres to traverse over 12 kilometers of the snow-covered road towards Joshimath. Rally Director Mr Vijay Parmar said that the overall speed had to be brought down at 10 kilometers an hour to allow rallyists to cross this difficult patch. On account of the delay caused here, the last competitive stage of the rally from Chaukuthiya to Masi had to be cancelled.

After traversing about 280 kilometers on country roads, the rallyists reached Ramnagar on the east of the Jim Corbett Park in the evening. 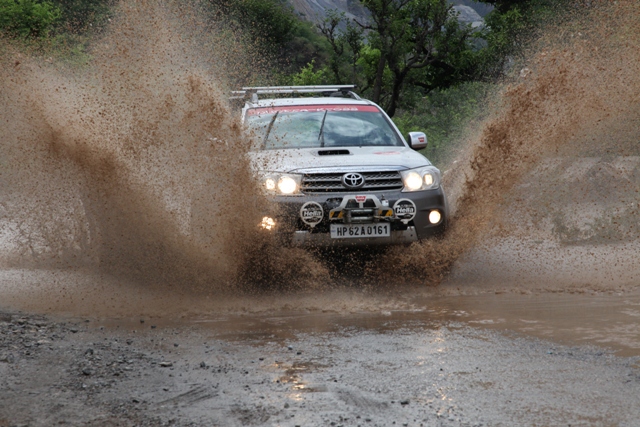 At the third place today were Pratap Thakur (Pune) with navigator Dhiraj Arora (Chandigarh), driving a Gypsy for Team Maruti. Thakur and Arora clocked total penalty of 2.40 minutes. At the fourth place were Amol Satoskar (Goa) with navigator G. Natarajan (Tamilnadu), driving an SX4 for Team Maruti, with penalty of 2.46 minutes. At the fifth place on Day Two were Sachin Singh and Prakash of Secunderabad, driving a Tata Xenon, with total penalty of 3.12 minutes.

Vishnu Singh, winner of the Mughal Rally in 2013 and the Maruti Suzuki Desert Storm in 2014, said he deliberately chose to drive a VW Polo for the Uttarakhand Rally. “It is a small car and is easily manoeuvrable on the mountain roads,” said Singh.

On the other hand Ajgar Ali, driving a Grand Vitara, said a bigger vehicle with higher ground clearance was a better bet considering all the stages of the rally. “The competitive stage from Chaukuthiya to Masi had to be cancelled today because the rally was delayed by the heavy snow. This stretch is extremely rough, since the road in under construction. If we had to traverse this stretch as a  competitive stage today, the ground clearance of the Vitara would have given us a distinct advantage,” said Ali. “Some parts of the stage tomorrow from Ramnagar to Dehradun are rough, and we are confident that our vehicle will give us an edge tomorrow,” he added.

The rally had started from Dehradun on February 2. The rally is organized on the TSD (Time-Speed-Distance) format, which is the sober format of motorsport and goes at controlled speed in all areas.

Uttarakhand Tourism Minister Shri Dinesh Dhanai had flagged off the Uttarakhand Adventure Car Rally at its ceremonial flag-off on February 1. The rally is open to any brand or model of automobile, and SUVs and cars compete separately in their own categories.

On the last and finaly day of the rally on February 4, the rallyists will move from Ramnagar to Dehradun. The rally route will cover approximately 1000 kilometers in the state.

Uttarakhand Adventure Car Rally offers highly attractive prize money of Rs 5 lakh, Rs 3 lakh and Rs 2 lakh for the top three teams respectively, and a special prize of Rs 1 lakh for the all-women’s team which performs the best. The rally is being supported by Maruti Suzuki and JK Tyres.