Shimla: The youth wing of opposition Bhartiya Janata Party, the Bhartiya Janata Yuva Morcha on Saturday questioned the credentials of Chief Minister Virbhadra Singh’s son Vikramaditya who has been allotted a pilot car by the State police.

State BJYM Chief Sunil Thakur and other offices bearers of the organisation in a statement said people holding constitutional posts like the State Governor, High Court Chief Justice, Chief Minister and the Speaker of the assembly are being given a police pilot car in the State. But the Chief Minister’s son who is not even an elected ward member or a Panchayat representative is driving all over the State escorted by a police driven pilot car, alleged the BJYM.

Questioning the State Police DGP, the BJYM has also questioned the deployment of Deputy Commissioners (DCs) and Sub Divisional Magistrates (SDMs) in the districts who report to the Chief Minister’s son on his tours. He is not a chairman of any government owned Board or Corporation in the State, said the BJYM. 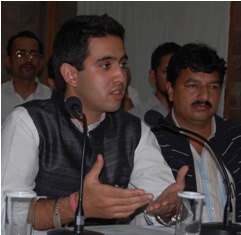 The young son of Chief Minister is invited as a chief guest in various employment functions in the State conducted by the State Labour and Employment Department and assisted by other State agencies. These “Rozgar Melas” (employment fairs) for the youth are being organised at the behest of State Youth Congress that is headed by the Chief Minister’s son here. “Which protocol is being followed when this outrageous patronage is given to someone for having just an ascribed status”, asked Mr. Thakur and other leaders of BJYM.

While condemning this act of the Virbhadra government the leaders also reminded the incumbent government of its promise made in the election manifesto to provide an unemployment allowance to about 10 lakh jobless youth of the State. Instead of doing something for them the Chief Minister is promoting his own son at the cost of these jobless youths, alleged the BJYM.

The organisation has also questioned the role and contribution of Mr. Vikramaditya in fighting against issues like the increasing role of drugs amongst the students and youth and increasing incidents of crime with a political patronage in the hill State.