Manali: The National Green Tribunal (NGT) recently passed orders directing the state government to impose penalties on decade old vehicles plying on the Manali-Rohtang highway. The Himachal Pradesh Government has been quick to implement the orders by imposing a fine of Rs 2,000 for any vehicles that is more than 10 years old and is found plying on the Manali Rohtang route.

Talking to Hill Post, a tourism official Ashwani Kumar, said “vehicles older than 10 years are not being allowed to go beyond Vashisht check post. Any violation on this would attract a fine of Rs 2,000.”  He disclosed that the check post had started functioning after NGT orders. 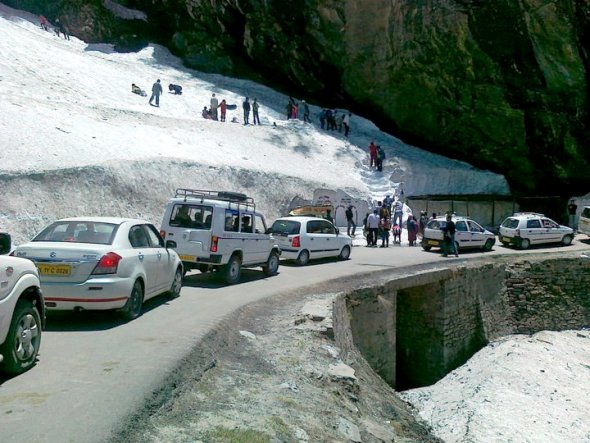 Under Section 179 of Motor Vehicles Act, 1988, local authorities are authorized to challan any such vehicle between Vashisht check post and the Rohtang pass. A pollution checking centre near Vashisht has also become functional and all vehicles going towards Rohtang and Solang are being stopped here for emission checks.

Mr.Ashwani Kumar further said that vehicles which fail the emission test are stopped at the barrier itself. “Be they tourist cabs from other states or local resident vehicles, all need to undergo emission test. Vehicles having valid ‘pollution under control’ certificates can go beyond the check post but are subject to surprise checks to ensure that carbon release is actually under permissible limits,” he said.

Concerns about the fragile environment of Rohtang and its surrounding areas have led the state and local authorities to start acting on the NGT directives. Fines of Rs 500 are also being imposed on litterbugs in the area. Congestion charges of Rs 50 from light vehicles and Rs 100 from heavy vehicles are also being collected from vehicles moving beyond Vashisht check post, an official said.