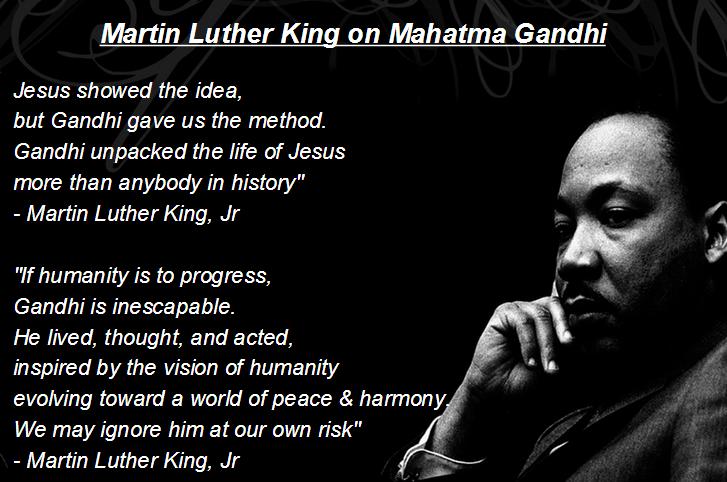 “Peace is not the absence of violence, but the presence of justice”. – Martin Luther King

In USA, 3rd Monday of January is observed as Martin Luther King, Jr. Day which is close to his birthday that falls on January 15. In current times, when conflict, violence, discrimination and inequality continue to punctuate human lives, it is time to reflect back how Dr. King used his spiritual convictions and principles of non-violence to successfully organize civil rights movement in USA.

The protracted struggle of black people of America demanding fairness, equality and dignity is truly remarkable and illustrates how people have to fight for their rights even in well-trenched democracies. USA became independent from Britain on July 4, 1776. It took another 90 years for blacks to be freed of slavery and another 90 years to secure several more civil rights.
African slaves were brought to North America for the first time in 1619. Slavery was abolished only in 1865 after President Lincoln issued Emancipation Proclamation in 1863. The rights to U.S. citizenship and suffrage followed. The Civil Rights Act of 1866 gave American blacks equal access to public facilities. However, this was overturned by the U.S. Supreme Court in 1875. African-Americans had to wait for nearly a century to regain their rights and arrival of Martin Luther King on civil rights movement scene played an important role.

His own experience and exposure to racism, his educational training as a religious preacher (minister) and immense influence of Mahatma Gandhi and Jesus Christ shaped Martin Luther King into a powerful leader with great oratory skills who fought for the rights of his black fraternity that led to passage of Civil Rights Act of 1964. King combined moral concept of love- agape (as revealed in Jesus, is unconditional and sacrificial form with highest purity) and principles of non-violence and put them into practice to bring about social reforms. He actually visited India for a month in 1957 to get hands- on experience of the tools of non-violence for his civil rights movement. King used passive resistance methods like fasting, sit-ins (dharnas in Indian parlance), selective buying (boycotting businesses that practiced discrimination) to his benefit.

Martin was born in 1929 in Atlanta city of southern state of Georgia in USA to Reverend Martin Luther King, Sr. and Alberta Williams King. His father and grand-father were Christian pastors. It is said that at age 17, Martin also felt inspired to join the ministry, which obviously made his father very happy. He obtained bachelors of Arts from Morehouse College in Atlanta, studying Sociology and English which came handy to him in public life. Then he went for a three years scholarship in theology at Crozer Seminary near Philadelphia. Thereafter, Martin enrolled at Boston University (9151-54) to pursue doctorate. In Boston he fell in love with a young woman from Alabama named Coretta Scott who was pursuing advanced training in Music. The couple got married in 1953.

After being awarded a Ph. D. in 1954, King accepted a position of pastor at Dexter Avenue Baptist Church in Montgomery, Alabama. But like Gandhi, fate had another role for him. When Rosa Parks was arrested for refusing to give up her seat to a white man in a local bus in Montgomery, King was thrown into a civil right cause that would catapult him to the national scene. The protests were not started by him, but he accepted the invitation to join the protest committee after initial reluctance. As the events took shape, the black community there organized itself into Montgomery Improvement Association (MIA) and King was elected the President. They decided to boycott the buses to fight the discrimination. The boycott lasted for 381 days and the non-violent movement was a triumph for the blacks in USA when Supreme Court upheld that segregation in the buses was unconstitutional.

Now the face of freedom struggle for blacks, King for the next 12 years led several successful battles for civil rights in USA until he was assassinated in 1968 just at the age of 39. His thrust was to fight discrimination, inequality and the oppression that was heaped upon a black man on a day to day basis. King was a prominent voice in fight against denial of voter rights, segregation in schools, denial of public facilities, inequality in employment and jobs and fight against poverty. Like Gandhi, King used his religious conviction and belief in non-violence to champion his cause. He transformed himself in to voice that appealed to the conscience of whites. He took a philosophical stand that “in the final analysis, the white man cannot ignore the Negro problem, because he is part of the Negro and the Negro is a part of him. The Negro’s agony diminishes the white man, and the Negro’s salvation enlarges the white man.” King took the fight of racial injustice to the moral pedestal where he brought dignity to his oppressed brothers and sisters and shook conscience of the oppressor white. King through his spiritual leaning, oratory and sometime moderate stance provided a healing touch to the race relations.

1963 was a crucial year for civil rights movement. Birmingham city in Alabama State proved to be the center stage of blacks’ fight for equality. The city was a most thoroughly segregated city, voter rights were blatantly violated, discrimination in jobs was most prevalent and day to day discrimination, humiliation and violence against the blacks was order of the day. King led a successful civil rights campaign where his spiritual prescriptions were put into practice to combat the ills of injustice. But the white segregationists used violence to disrupt the movement. Then in late summer of 1963, the chorus of his civil rights movement reached the pinnacle when The March of Washington was organized in Washington D.C. where King gave his historic “I have a dream” speech. Selma (Alabama State) is another success story where King played an important role in highlighting obstructive tactics used by racist authorities in black voter registrations.

The entire struggle culminated in passage of Civil Rights Act in 1964 granting full rights to African-Americans in terms of voting rights, access to public places and ending discrimination in employment. The act also resulted in setting up of Equal Employment Opportunity Commission by U.S. government. King was awarded Nobel Peace Prize in 1965 at the age of 35.

Throughout his public life, King was jailed for more than 20 times, faced violent attacks several times from white supremacists and his home was bombarded. He travelled over 6 million miles, gave more than 2500 speeches and wrote 5 books and dozens of articles.

The phenomena of wars, slavery, colonization, apartheid, and untouchability in human history are a pointer towards the struggle that we have to constantly endure to be free. What would sum it up better than the words of Dr. King himself: “Human progress is neither automatic nor inevitable. Every step toward the goal of justice requires sacrifice, suffering, and struggle, the tireless exertions and passionate concern of dedicated individuals.”