Manali: Selectors here picked 5 skiers who  are to represent the Indian contingent at the World Ski Championship 2015 to be held at Colorado USA in February. The small team would be accompanied by two coaches and two federation executives.

The selected skiers include two girl skiers — Anchal and Varsha besides Arif Khan, Himanshu and Hira Lal who did represent India at the winter Olympics. Ludar Thakur and Roop Chand Negi are the boys and girls coaches respectively. President of Winter Games Federation of India (WGFI) Colonel JS Dhillon and secretary general Roshan Thakur would also accompany the team. 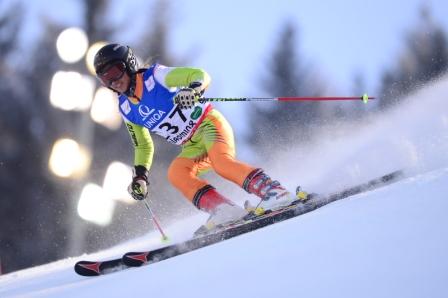 “We will be leaving for USA on February 8, not February 2, due to accommodation issues at the event venue. We shall take part in technical events, not in speed events that are starting on February 3,” said WGFI secretary general Roshan Thakur. He added  “Four of skiers selected are from Himachal Pradesh and one is from Kashmir. We are hoping for better performance this season.”

Two of the skiers have recently returned after undergoing a months training in Austria conducted by International Ski Federation (FIS). Unable to get adequate training facilities the Indian skiers say that currently they have no infrastructure for Pre-World Cup Championship practices in the country. “The lone ski slope of Manali at Solang has no lift facility. Neither has it snow grooming facility,” says Thakur.

As many as 70 countries are expected to take part in the World Ski Championship this year. Unlike Winter Olympics last year when Indian skiers were not allowed to carry the national flag, team India this time would participate under its national flag at the Colorado championships. WGFI is to bear all expenses, without any aid from government, for the championship participation.

It is a relief for skiers of Uttarakhand, J&K and Himachal that internationally recognized coaches are grooming their skills these days. A coach from Japan is giving lessons to skiers at Solang in Manali, a coach from Switzerland is giving technical lessons to skiers at Auli in Uttarakhand and an Italian coach is guiding skiers in Gulmarg. The coaching camps that started on January 9 will last till January 16. WGFI is paying Rs 4 lakh to each coach.

The FIS Alpine World Ski Championships 2015 at Vail and Beaver Creek in Colorado, United Sates is scheduled to be held from 2 to 15  February