Critical of the Satluj River Basin Cumulative Environment Impact Assessment study conducted, tribal population of Kinnaur, an Indo-China border district, have questioned the recommendations made stating that ‘forced development that goes against the people will lead to serious anti- state sentiments.’

The state directorate of energy which placed the cumulative basin study for public consultations at district headquarter Rekong Peo and at Pooh on 8-9 December was challenged on several grounds by the participants, which included the study not having taken into account the impact of several large projects that have already come up and despite pointing out ‘no-go areas for hydropower’ the report not making any recommendations about it.

President of Him Lok Jagriti Manch, RS Negi – a retired IAS officer raised the objections about, “the study has been done with an ecosystems approach, dividing Satluj basin in three zones – upper, middle and lower, but the recommendations made have not taken into account specific zones and their characteristic features. The blanket recommendations made fail to address the complexities and differences in each of these zones”.

Spread heading the environmental group, Negi has been studying the impact of hydropower projects for many years. “The 18 month long study period have not held any consultations to take into account the local point of view on projects and their impacts. Public hearings and consultations have been reduced to a sham and none of the recommendations made at these meetings are addressed or taken up by the government,” he said. 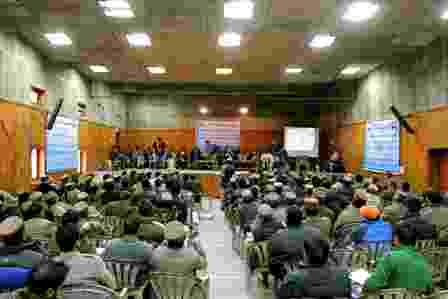 Representatives from Hangrang Valley in Upper Kinnaur were agitated about the report first having pointed out about declaring certain areas as ‘no go zones for hydropower’ because of the impact these projects had on fragile trans Himalayan environment, to conserve biodiversity, especially its fish fauna but was vague about it in the section where study recommendations have been made.

Shanta Kumar, a representative of Hangrang Ghati Bachao Sangharsh Samiti, ‘no go’ zones be specified and be recommended. He said that there was severe opposition to hydropower projects in environmentally fragile Hangrang Ghati valley.

We are very clear that experience of project affected villages in lower Kinnaur and other areas has been negative. If the government calls this ‘development’ they need to prove it first by making the local opinion approve it. Otherwise in a sensitive border areas such forced development that goes against the people will lead to serious anti-state sentiments”, said Shanta Kumar.

The study report was questioned about not having included the impact of development of the 1500 MW Natpha Jhakri project, the 1000 MW Karcham Wangtoo project and the 300 MW Baspa project on the river basin.

Prakash Bhandari of Himdhara Environment Research and Action Collective claimed that the impact of hydropower projects on forests and water sources was done without any baseline data. “It is unclear as to how the consultants arrived at any conclusions without availability of baselines”, said Bhandari.

Critical issues like impacts of boring long tunnels, passing whole rivers through them have been left out, says the environmentalist.

Damage to houses and scarce farmlands because of tunnels, massive landslides, blasting operations, massive muck dumping in narrow valleys, air pollution  during construction phases were not there in the study.

The study panel responded to it that these issues were not part of the terms of reference handed out to them by the government through the department of energy.

The public consultations meeting were chaired by the district collector. Mandate of the study done was to assess the overall cumulative impacts of the ongoing and proposed hydropower development in the Satluj River basin. The study has been conducted by Indian Council of Forest Research and Education in collaboration with other institutes.

Several large and small hydropower projects are either planned or are being executed on Satluj River Basin, which include the large 556 MW Lurhi Project, 960 MW Jagni-Thopan-Thopan Powari project and others. Environmentalists have been demanding the some sections be left untouched for conserving the fragile environment and also for allowing free flowing stretches of the river, which otherwise would totally be diverted into tunnels, making the mighty Himalayan river into a vanishing river.