Shimla: Having declared the highest ever dividend in ten years of operation, SJVN board members handed over a dividend cheque of Rs 261.48 crore to power minister Piyush Goel at Delhi.

Led by Chairman-cum-Managing Director RP Singh and accompanied by directors AS Bindra and NL Sharma the dividend cheque was paid in the presence of power secretary Pradeep Kumar Sinha for the 64.5% equity that Government of India holds in the mini-Ratna public sector power generating company. 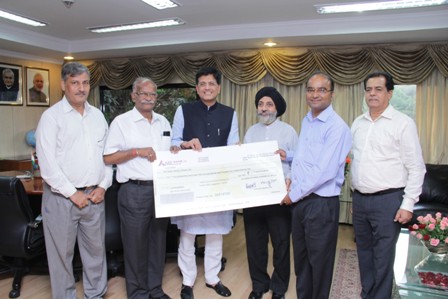 Because of improved profitability, SJVN had declared a dividend of Rs 405.39 crore which was higher than the Rs 397.12 crore declared in the last financial year.

On the occasion of handing over  the dividend cheque, RP Singh informed the minister that the 1500 MW Nathpa Jhakri Power Plant had completed 10 years of operation and two other plants, the 412 MW Rampur station and 47.6 Khirwire Wind Power Plant in Maharashtra had also commenced generation operations.

Incorporated as a joint venture corporation, the shareholding pattern in SJVN is that the union government holds 64.5% equity, government of Himachal Pradesh has 25.5% share and the balance 10% is with the public.