Shimla: Silt free flows in Satluj river backed by turbines tuned to tap the full summertime generation capacities has enabled 1500 MW Nathpa Jhakri hydro plant to achieve the highest generation in a month ever since the run of the river plant was commissioned in May 2004.

Company spokesman Vijay Verma disclosed, “working at a plant availability factor of 108.3%, in July the Nathpa Jhakri power station clocked a generation of 1191.217 million units of electricity, the highest ever recorded at the station for any given month.”

Against an installed capacity of 1500 MW, the station operated at 1600 MW capacity for all days in July.  Earlier the highest single month generation recorded was 1186.5 million units in July 2012.

RP Singh, chairman-cum-managing director SJVN, the company that operates the plant, attributed the achievement to optimum machine and water management at a time when silt levels in the river remain high.

The plant even last year exceeded its generation target of 6900 MU by recording a generation of 7193 MU. In four months of the current financial year the plant has already generated 3352 and is likely to exceed the year target

Only last week SJVN declared its quarterly results, where a 23.61% jump in profit after tax over the corresponding quarter from the previous years was reported. With the 412 MW Rampur project having come on stream, the company reported a jump in profit to Rs 424.29 crore from Rs 343.24 in the June 13 quarter. 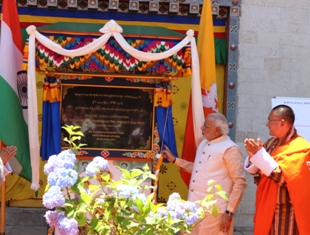 From hydro, diversifying into other areas of the power sector, SJVN is implementing 10 other projects in Nepal, Bhutan, Arunachal Pradesh, Himachal Pradesh, Uttrakhand, Bihar and Maharashtra.

On June 16, Prime Minister Narinder Modi, on his maiden visit abroad, laid the foundation stone of the 600 MW Kholongchu hydroelectric project in Bhutan, a project that SJVN is executing as a joint venture with Druk Green Power Corporation Limited of Bhutan.