Shimla: High tempers, slogan shouting, unruly scenes and disrupting of proceedings in Himachal Pradesh assembly over the past four sessions today culminated in the government tabling an unprecedented pre-mature sine die adjournment motion of the house stating that it had no further business to transact.

Put to voice vote by Speaker BBL Butail, the motion was adopted before the assembly was indefinitely adjourned sine die.

The overnight stance of opposition BJP boycotting the 16 day scheduled monsoon session appeared to have resolved as they took their seats for participating in the question hour in the morning.

The speaker having held an all party meeting the previous evening to resolve the differences between the treasury and opposition benches was said to have brought the opposition around to participating in the session.

But as the question hour ensued, the opposition intentionally were seen boycotting and evading chief minister Virbhadra Singh, choosing not to raise a question when the reply was to come from the chief minister. 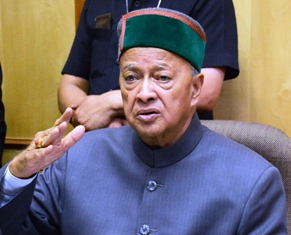 Seizing an opportunity, the chief minister intervened to reply to a call attention motion about a cloud burst in Nahan, raised by senior BJP member Rajiv Bindal. Reply to the motion was actually to be given by revenue minister Kaul Singh Thakur.

Agitated by the oppositions boycott move, the chief minister lashed out, saying that the opposition was only attending the house to lay claim to permitted allowances. They were frequently evading participating in the listed business as they were not showing any interest in its proceedings, he said.

Speaker Brij Bihari Butail efforts to pacify the situation did not have much impact.

“I cannot force any member to raise a question, nor can I force any minister to answer a question. However, I want to run the house smoothly and end the frequent disruptions,” said Butail.

BJP chief whip Suresh Bhardwaj quipped that ministers were not replying to questions and in contempt of the chair were even ignoring the speakers’ directions. He was referring to the power minister Sujjan Singh Pathania, who earlier had deliberately chosen not to reply to a question put to him by an opposition member.

Agitated treasury benches were up on their legs and some of them flashed newspapers that had a photograph of BJP MP Anurag Thakur displayed on it.

Leader of the opposition Prem Kumar Dhumal said that raising questions was an oppositions right but a minister could not ignore replying to it. In case a minister was not in a position to reply to a question, he could authorize a cabinet colleague to do so, said Dhumal.

Recalling the boycott of Rajiv Bindal, BJP member, when he was health minister by congress members in the earlier government, Dhumal said there was much precedence that justified boycott of the chief minister.

Before the days listed business was to draw to a close, parliamentary affairs minister Mukesh Agnihotri got up and sought adjournment of the assembly for an indefinite period.

“Since much of the business before the house is over, the government wants to adjourn the assembly sine die”, said Agnihotri.

Finding the tables turned on them, BJP members opposed the move.

Opposition leader Dhumal said that the government was not in a position to face the opposition and were making every attempt to evade discussion on the money laundering case pending before the Delhi High Court.

He said that he was prepared for a discussion in the house about the HPCA case but the speaker needed to ensure that the allegations leveled against chief minister would also be discussed.

Taking offence to flashing of the news picture of Anurag Thakur, Dhumal sought to know the status of investigation into Bamloe Builders case that had provoked congress legislators, when they were in the opposition, to stall the house in many proceedings. 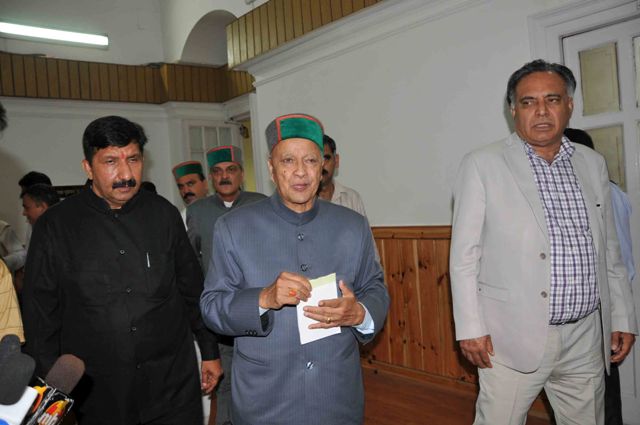 Insisting on adjourning the house sine die, chief minister Virbhadra Singh said that as there was a stalemate between the government and opposition and the government had no further business to transact.

“Frequent disruptions were a  sheer wastage of public money. I request the speaker to adjourn the house sine die,” said Virbhadra.

With the speaker pointing out that there were a number of important bills pending before the house, the chief minister said, “we can again convene the house in the next two months.”

The speaker sought that the adjournment be made till tomorrow as he wanted time to study the  rule book and know whether he was entitled to abruptly adjourn the house sine die. Senior congress leader Asha Kumari intervened and asked for adjourning the house till after the lunch break, when the chair could give its ruling.

As the house re-assembled after lunch, the speaker gave his ruling that under Rule 20 of the Vidhan Sabha, the house could be adjourned by the speaker on his own motion or on such a resolution moved by the house.

The resolution moved by parliamentary affairs minister was put to voice vote and was adopted by a majority vote. Shouting slogans the opposition vacated the house.

Convened on 6 August, the monsoon session of Himachal Pradesh assembly was scheduled to hold 16 session and was planned to concluded on 29 August.