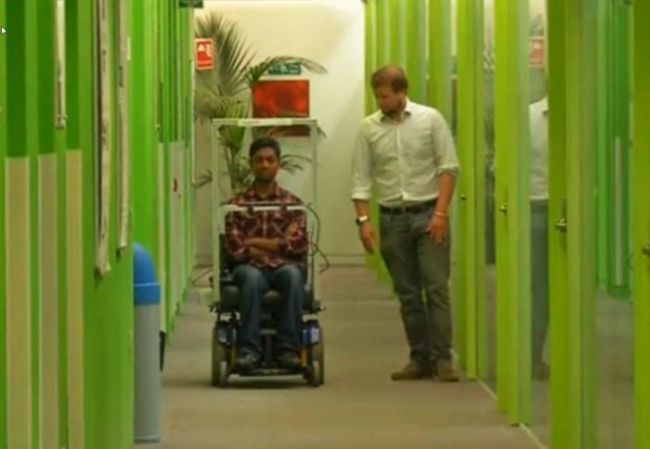 The last decade and two have seen plentiful models of wheelchairs that claim to be tech savvy, and designed keeping in mind the specifics needs of paraplegics. Their basic aim is to empower the specially abled to commute hassle free. We have witnessed attempts at designing wheelchairs that move forward only with the aid of the eye movement.

But they all face the same road block, the wheel chair fails to identify the exact moment when the user wants to move in a particular direction. To triumph over this predicament, Aldo Faisal and his team of colleagues at the Imperial College of London have designed and developed a wheel chair that has in built eye tracking mechanism. This tracking device is connected to a pair of cams that are able to detect the precise intention of the user, by decoding his eye movement.

Faisal explains further that the software that they have developed is connected to the cameras. And the cameras can precisely detect whether the user wants to move forward or is just glancing at a distance. The algorithms are enabled to detect the movement of the eye in less than a 10th of a millisecond and are also able to take a snap decision in the next 10 milliseconds. Since the decision making is in a matter of some milliseconds the user feels that the wheel chair is actually moving in conjunction with the blinking of the eyes.

The wheel chair is still in its last stages of development, but promises to be a boon for patients suffering from spinal injuries and other cases of sclerosis. Patients with severe paralysis also stand to benefit as the brain is in total control of their eye movements.

This innovation also promises to be beneficial for applications that are controlled by the eyes and especially in scenarios where the user is enabled to move things using a robotic feature, guided with their eyes.

This eye controlled wheelchair has also managed to get the attention of Reuters. The project is aimed to making movement easier for people who have limited use of their limbs, and that is the main reason for the designers to keep it as inexpensive as possible. Presently the tests are being carried out on able bodied humans and it was found that steering was quick and with minimal errors.

But only when the trials will be conducted on the disabled users, will the success of the project be able to be measured in the real terms. On the whole, the project promises hope and freedom to patients who are presently dependent on others for moving around. The product will be available commercially in three years time.