Dharamshala: Tibetan Buddhist leader, the 17th Karmapa, Ogyen Trinley Dorje, arrived today in Berlin on his first European visit. The Karmapa will meet this week with members of the Jewish community in Berlin, visit the Holocaust Museum and the Berlin Wall.

On a stop in Cologne, he was specially invited by the Archdiocese of Cologne to address faculty and students at the Katholische Fachhochshule NRW and was offered a private tour of the Cologne Cathedral. 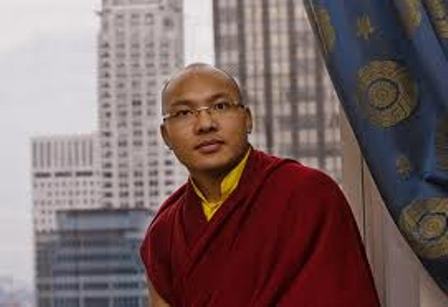 A communique by Karmapa Lama office here in Dharamsala state that this was only his third trip outside India after a dramatic escape from Tibet to India.

The Karmapa enjoys a wide following in the West, where his message of social responsibility and environmental sustainability has been warmly embraced. At the age of 29, he is the head of the 900-year-old Karma Kagyu lineage, one of the largest schools of Tibetan Buddhism.

The five-day visit to Berlin marks the second stage of this Tibetan Buddhist leader’s European visit, centred on Germany. From 5-8 June, the Karmapa will be teaching daily to a sold-out hall at the Estrel Convention Centre in Sonnenallee in Berlin.

He will deliver public addresses on social responsibility for youth, Buddhism and the environment, and will also give a religious transmission from the 13th century to his followers. In keeping with the inter-religious themes of his visit, he will meet Rabbi Ben-Chorin and Rabbi Gesa Ederberg, leaders of the Jewish Community of Berlin.

The Karmapa currently lives in Dharamsala, in North India near the Dalai Lama’s official residence, with whom he maintains a close relationship of mentor and protégé.

While fully upholding the traditions of his lineage, the 17th Karmapa, Ogyen Trinley Dorje, has actively modernized its religious practices in keeping with 21st-century needs. He has founded an environmental association of Himalayan monasteries and nunneries in grassroots sustainability work.