The day former Congress leader Satpal Maharaj quit the Congress and joined the BJP in the run up to the Lok Sabha elections, political circles here were abuzz with rumours that there was a tacit understanding between the godman and the BJP high command that he will be made the chief minister of this small hill state, should the Congress government be toppled.

Dehra Dun : It is not only the candidates who were in the fray in Uttarakhand that are having sleepless nights, but with reports that should the BJP fare well in the Lok Sabha polls it could be curtains for the Harish Rawat government in the state, the Congress legislators too are sailing in the same boat.

The day former Congress leader Satpal Maharaj quit the Congress and joined the BJP in the run up to the Lok Sabha elections, political circles here were abuzz with rumours that there was a tacit understanding between the godman and the BJP high command that he will be made the chief minister of this small hill state, should the Congress government be toppled. 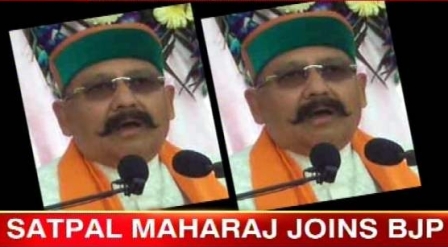 To show that the party intends honouring its commitments, the BJP high command gave tickets to all the state heavyweight leaders for the Lok Sabha elections to give the message to Maharaj that he was now the lone heavyweight in state politics and therefore the chief ministerial candidate, should the Harish Rawat government be toppled.

It may be mentioned here that the Congress has formed the government after cobbling a majority with the help of independents, and legislators of the BSP and lone Uttarakhand Kranti Dal MLA. Incidentally two of the three BSP legislators have also been suspended by the party high command but vidhan sabha speaker Govind Singh Kunjwal has not suspended them from the House.

Political pundits here claim that the independents, BSP and UKD legislators, though supporting the Harish Rawat government,  were not very active for the Congress candidates in the recent Lok Sabha elections, which was an indication that after the exit of Satpal Maharaj from the Congress, they too have seen the writing on the wall and are keeping their options open.

They said that the fact that some of the Congress legislators, are known supporters of Satpal Maharaj and have sided with him openly in the recent past. These legislators, which include his wife, Amrita Rawat, who is a cabinet minister in the state government, will only be too ready to pull the rug as and when the occasion comes.

However, political pundits were of the view that such a scenario would only emerge if the BJP-led NDA comes to power at the centre and the BJP on its own performs well by crossing the 230 mark. “In this case the group of independents, BSP and UKD legislators who go by the name Progressive Democratic Front (PDF) will not batter an eye lid in withdrawing support to the Harish Rawat government”, they felt.

They alleged that Satpal Maharaj has been keen to become the chief minister of Uttarakhand and had staked his claim at every opportunity along with the like of Harish Rawat and others. In the fgirst occasion, the Congress high command opted for veteran Congressman N D Tewari which silenced all other aspirants.

And while Maharaj accepted the decision of the party high command, Harish Rawat continued his struggle for the chief minister’s chair, making the position of Vijay Bahuguna very awkward on occasions by giving statements against the state government, and on one occasion even threatening to go on an agitation against the Bahuguna government.