“As chairman of the team that framed the Congress charge sheet, we had documented several issues of commission and omission done by the then BJP government, but by only taking up HPCA cases for investigation, the other issues were facing neglect,” said Bali.

Shimla: Differences over how the government was investigating corruption charges leveled in a charge sheet drafted under a team by GS Bali, a cabinet minister, were out in the open with the minister saying that a HP Cricket Association centric investigation had neglected other serious issues pointed out in the document.

Responding to a media query that chief minister Virbhadra Singh had been washing his hands off from having framed a charge sheet that the congress legislative party had handed over to President Pranab Mukherjee for a probe into acts of omission and commission done by the previous BJP government headed by Prem Kumar Dhumal, Bali said that the charge sheet had documented several cases but the government was only focusing on dealings of HP Cricket Association. 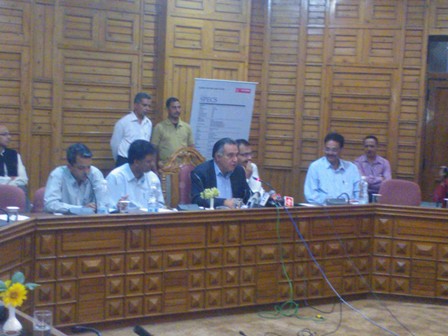 Talking to reporters here today, the minister asked the chief minister to also get the several large benami land deals, violations by Bamloe builders in constructing a residential colony in a green area, the fallen through Bantonly Castle deal and several other issues documented investigated with urgency for the HP Cricket Association centric association was leading to a neglect of equally important corruption issues raised in the Congress charge sheet.

“As chairman of the team that framed the Congress charge sheet, we had documented several issues of commission and omission done by the then BJP government, but by only taking up HPCA cases for investigation, the other issues were facing neglect,” said Bali.

The government has kept the kettle boiling in the HPCA case, where a society registered under the state act was transformed into a not for profit company by its president Anurag Thakur and other lifetime members.

Construction of Dharamshala cricket stadium by allegedly encroaching upon government land is also a case being pursued against HPCA and its functioning.

Thakur has been asked to join investigations at Dharamshala in the first week of June..

In the run up to the state assembly election in 2012, as an opposition party Congress had blamed the BJP government for having put Himachal on sale because of alleged numerous benami land deals.

Himachal special land laws give discretionary powers to the cabinet for permitting any outsider, non-Himachali and a non – agriculturalist to buy agricultural land in the state. Given the heavy demand from builders and potential second home owners and the restrictions in permissions granted for buying land; to overcome the stringent laws many evade it by illegally buying land in the name of a resident Himachali.

Buying land in a legible Himachali’s name but someone else being the property owner in possession is broadly what a benami ownership is considered.

The chargesheet documented by Bali’s team had pointed out to several benami deals struck in complete violation of the state land laws during Dhumal’s tenure as chief minister.

Congress had also created a ruckus both in the state assembly and outside over permission granted to a high builder by the then Dhumal government to develop a gated colony in a thickly forested area.

The issue figured in Bali’s chargesheet as did an effort made by an NRI to buy prime property Bantony Castle right in the city centre for setting up a star hotel property.

After change of government, the Virbhadra government has announced plans to acquire Bantony for setting up a city museum.