Dehra Dun : While regional parties have flourished in almost all the states of the country, to the extent that they have the national parties like the Congress and the BJP at their beck and call for coalition during elections, the hill states of Himachal Pradesh and Uttarakhand, are two where the regional parties come, made their presence felt and faded away into oblivion.

While in Himachal Pradesh the Himachal Vikas Congress (HVC) floated by former union telecom minister Sukh Ram made its presence felt and even helped the BJP form the government by supporting the party, in Uttarakhand, the Uttarakhand Kranti Dal (UKD) spearheaded the agitation for statehood and in 2008 also helped form the government.

Ironically both the HVC and the UKD, after making their presence felt in the form of becoming an alternative to the national parties in the two hill states and taking up regional issues which are a crying need in these small mountain states that have to follow national norms on various issues like roads being sanctioned under PMGSY, that do not do justice to them, just failed to live up to expectations.

The Himachal Vikas Party is now defunct in Himachal Pradesh as its aged supremo Sukh Ram preferred to go with the Congress because of the cases against him, rather than keep his party afloat and his son, Anil Sharma is also in the Congress, the Uttrakhand Kranti Dal in Uttarakhand is on the verge of becoming defunct in the coming times, much to the disappointment of the people. 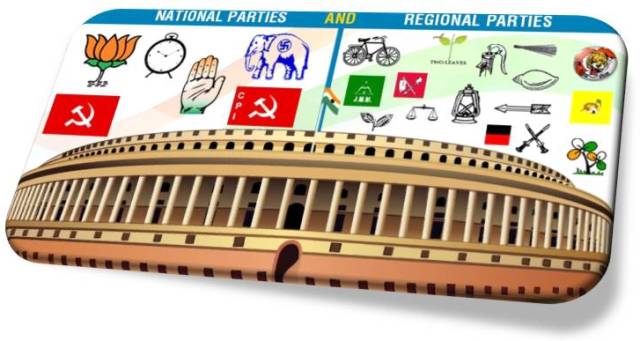 The Election Commission has already told the two factions of the parties that were staking claim to the party symbol to contest the recent Lok Sabha elections, that neither of the faction qualified to get it and that their candidates would have to contest as independent candidates. This is the first blow to the party which had unified the people of the state for the cause of statehood.

One wonders why if regional parties could do so well and prosper in the other states of the country, the efforts have failed in both Himachal Pradesh and Uttarakhand. Specially in Uttarakhand it must be seen in the light that the people, including women and youth, took to the streets at the beck and call of the party leaders and even braved bullets and lathis of the Uttar Pradesh Police and PAC.

The party which had three MLAs in 2008, could manage to have only one win in the 2012 vidhan sabha elections, and he too is now a minister in the Congress government. But when things went awry between the Congress and the UKD leaders, the minister was asked to quit his cabinet post, but he refused to do so.

Power politics and conflicting egos have been the bane of the Uttarakhand Kranti Dal, which rather than gaining strength from the support of the masses failed to live up to the expectation of the people. Whether it was on the issue of making Gairsain the state capital, or providing jobs to the youth or even improving the much needed infrastructure in the remote villages, there was simply no deliverance.

The bigwigs in the party broke the party into different sections and the factions further broke down and with them surfaced the disappointment of the people and they started slowly but surely getting away from the party which they had looked forward to as a panacea for all their ills. Now when one talks of Uttrakhand Kranti Dal, the first question is which faction and who are its leaders.

With the Dal fading into oblivion just being a matter, regional issues are being taken up by some other parties, as these are linked with the people at the grassroots level. For example AAP has included making Gairsain the state capital in its election manifesto for Uttarakhand.