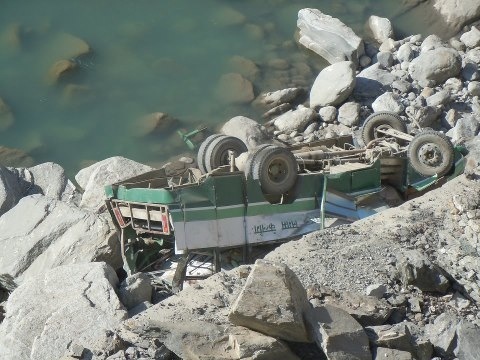 SHIMLA: A great violation of human rights is going on in the hill State of Himachal where hundreds of people are dying every year in bus accidents due to bad road conditions.

The government that is represented by two major parties one after the another in the hill State appears totally callous and indifferent towards the road accidents where innocent people are losing their lives for no fault of theirs, this is stated by the Communist Party of India-Marxist, which is emphasising in making it an elections issue instead of the clash of particular personalities or families in the elections.

Dr Kuldip Tanwar, State secretariat member of the party and incharge of the Sirmaur district who visited the spot of accident where 18 people were killed earlier this week in a private bus accident in Shilai tehsil of Sirmaur district said the State government in a criminal neglect is ignoring the quality of work being done by contractors in the countryside roads where these fatal private busses are plying.

The road contractors and private transporters in Himachal who are the main financers of these political parties often go scot free for making poor quality roads and plying overloaded buses, which are the two main reasons for these accidents, he said.

In an another serious accident on Wednesday about 10 people were serious injured when a private bus met with an accident in Renuka in the same district. About 65 people have lost their lives in Sirmaur district only in past eleven months, said Dr Tanwar.

“How good it could be if the prime ministerial candidates and senior leaders of both these parties are made to travel by road from Ponta to Shilai, for they would know the real condition of life in the rural areas”, he said.

The CPI-M has criticised the MLA who is a CPS for PWD from Sirmaur district for ignoring the bad plight of roads and paucity of buses in this backward district. It has requested the Chief Minister to take cognizance of frequent bus accidents in the hill State and take action against the guilty.

The enquiry reports of bus accidents should be made public and all the deceased should be given at least a grant of Rs 5 lakh as ex-gratia, demanded the left party.